Popular Mechanics
Issue: Aug, 1939
Posted in: House and Home
5 Comments on The Electric Home of the Future (Aug, 1939) 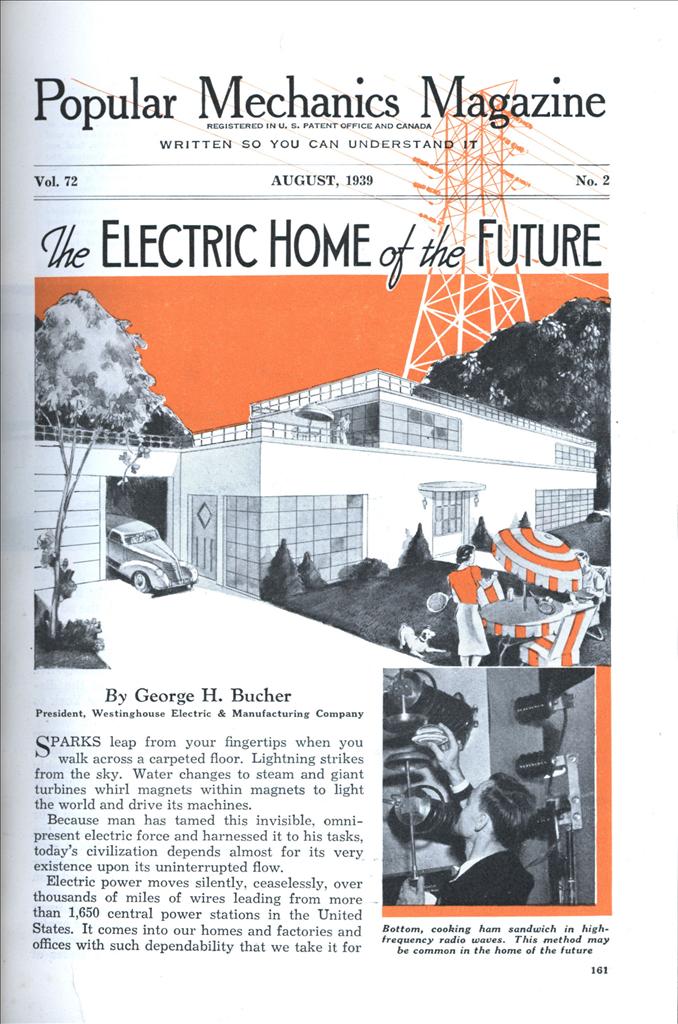 The Electric Home of the Future

President, Westinghouse Electric & Manufacturing Company SPARKS leap from your fingertips when you walk across a carpeted floor. Lightning strikes from the sky. Water changes to steam and giant turbines whirl magnets within magnets to light the world and drive its machines.

Because man has tamed this invisible, omnipresent electric force and harnessed it to his tasks, today’s civilization depends almost for its very existence upon its uninterrupted flow.

Electric power moves silently, ceaselessly, over thousands of miles of wires leading from more than 1,650 central power stations in the United States. It comes into our homes and factories and offices with such dependability that we take it for granted. But what does it really mean to us?

Thirty years ago, the housewife could look forward to washing and drying 28,000 dishes, pots and pans and some 16,000 pieces of silverware every year. In thirty years she would wash enough pieces to make a stack almost eighteen miles high, the equivalent of seventy-six stacks of dishes as tall as the Empire State building. Today an electric washing machine washes and dries more than 100 pieces at a time, using water at 140 degrees Fahrenheit, so hot that microbe growth is checked.

Before electricity and planning reached the kitchen, this same average homemaker walked 125 miles a year preparing meals. Studies show that in an ordinary kitchen it takes from 200 to 325 steps to prepare a single meal, but with the advent of electricity and planning, kitchen mileage was cut seventy-five per cent, a saving of ninety-five miles, or about the distance from New York to Philadelphia.

It requires an average of 1,083 lifts of an iron to hand-iron the weekly laundry for a family of four. Since the ordinary iron weighs between four and eight pounds, this means that the housewife lifts more than two tons at each session at the ironing board. Electric ironers do the job without any lifting and iron twenty-four square feet a minute.

Manufacturers have come to look upon the design and distribution of home appliances as a long-term job of making electric homes. Today’s house is a series of separate centers of electrification. Tomorrow’s electric home will be built around the electric power supply and appliances. To achieve this ultimate in electrical living will require the resources of research, engineering and manufacturing knowledge and experience.

This future home will probably be equipped with a number of control centers, from any one of which the homemaker can give her commands to appliances at work in the kitchen and laundry. Electric ranges already are equipped with automatic controls for temperature and cooking time, but there is no practical reason why these operations together with the other appliances cannot be controlled remotely from any room in the house. Perhaps short-wave radio may be utilized for this purpose, as well as for answering the doorbell and receiving visitors by transmitting a greeting to them and unlocking the door.

The time may come when we shall use short-wave radio frequency to cook our food. In fact, Westinghouse research engineers have succeeded in cooking hams in a radio frequency field in forty minutes as compared with four to six hours normally required to cook them with steam. Of course this is only a laboratory achievement today, and it is too early to say that it will prove practical in general application. But it has distinct advantages. Ham cooked by steam loses up to ten per cent of its weight, while radio cooking dissipates only three and one-half per cent.

In the not-distant future, the home may well be equipped with “mood control,” which is made possible by newly developed light sources. It’s possible that people will suit the light and color of their rooms to their moods. These new-type lamps produce colors of warm white, daylight white, gold, red, blue, pink and green. It’s up to the psychologists to figure out the proper combinations of colors to lift one’s spirits, when they are down, with a flood of brilliant light, or subdue a sense of excitement with soothing mellow light.

These new lamps are highly efficient colored-light makers, producing from ten to fifty times as much light per watt as has been possible with incandescent lamps. They utilize a very low-pressure mercury vapor discharge which produces ultraviolet radiations, giving little direct visible light or heat radiation. The inside surface of the glass tubes is coated with chemicals which glow when struck by invisible ultraviolet radiation. The combination of chemicals used in the coating of the lamp determines the resultant color.

It is even possible that in the future we may produce on a commercial scale similar lights by bombarding the fluorescent material of the lamps with short-wave radio beams.

Still other lamps may be made to keep the plants of future soilless farms at work day and night with only minimum rest periods. The scientific farmer or the amateur gardener may simply turn on a switch and flood his plants with light. This will necessarily be a different kind of light from that used in reading lamps, for plants utilize principally the blue and red wave lengths of the sun’s visible spectrum in getting their energy of growth. This lamp would concentrate on the production of these two specific wave lengths.

Air conditioning in its widest possible meaning will undoubtedly play a role in the next generation. Even now the Precipitron, an electrostatic air cleaner, is at work in homes, offices, hospitals and factories, literally electrocuting dust and dirt out of the atmosphere. This job of ridding the air of dust is one worthy of a Hercules, because as many as 10,000,000 individual particles of smoke and dust have been counted in a single cubic foot of air in one industrial city, and an average city ordinarily has between 500,000 and 2,000,000 particles to a cubic foot of air. The Precipitron, however, eliminates more than ninety-five per cent of such air-borne particles by charging them with electricity and then drawing them off to oppositely charged collector plates. Housewives will appreciate what this means in keeping rugs and curtains clean. When the Precipitron is allied with a compressor mechanism the result is controlled temperature and pure air indoors.

An essential phase of air conditioning in the future will certainly be the eradication of air-borne bacteria from homes and public buildings as well as hospitals. Man-made “sunlight” is already available for this attack on disease. As a matter of fact, the “Sterilamp,” which is the most efficient bactericidal ultraviolet source yet devised, is already in service sterilizing the air in hospital operating rooms, protecting eating utensils in restaurants, and preventing mold formation on cosmetics and baked goods. This device has now made possible the tenderizing of meat on an economical basis. The “Sterilamp,” installed in refrigerators, carries its sterilization benefits into the home, a new adjunct to modern refrigeration.

Most people are familiar with the operation of electric refrigerators, but few realize that this refrigerating process can be reversed to heat their homes. The future may possibly see wide use of this unsuspected heat source. Utilization of cold outdoor air to heat a building is not at all impossible. As a matter of fact, Westinghouse engineers recently installed such a reversed refrigeration heating plant in an office building.

Of course the future home will be equipped with both radio and television. No one can foresee the possibilities of television. It may change our whole concept of entertainment and move the amusement centers of Broadway and Hollywood right into our living rooms. The home of tomorrow no doubt also will be equipped with some electrical means of recording news reports and pictures as soon as the news happens.

These we all important phases of the significance of electricity to you. To more than half a million men and women electricity also means jobs. Some 274,000 persons were employed during 1938 in keeping electric power moving into more than 20,000,000 homes and hundreds of thousands of factories, offices and stores. In addition, the electrical manufacturing industry employed more than 300,000 persons in supplying equipment for the nation’s power systems.

As industries go, the electric power industry is young, but it is a lusty youngster, for even in the slump year of 1938 it did more than two billion dollars’ worth of business. Some 600,000 new customers were added to its rolls of electricity users. In contrast, thirty-five years ago the annual electrical business of this industry amounted to only $100,000,000.

In 1927, $148,400,000 worth of kitchen and table appliances, such as electric ranges, water heaters, vacuum cleaners and washing machines, were sold. Ten years later this figure had jumped twenty-five per cent to $175,000,000. During the same period sales of electric refrigerators more than tripled.

Against the reality of such figures and achievements, one dares not place any limits on the possibilities of electricity in the future.