Modern Mechanix
Issue: Oct, 1932
Posted in: Motorcycles
No Comments on The Fascinating Story of Your Motorbike (Oct, 1932)

The Fascinating Story of Your Motorbike (Oct, 1932) 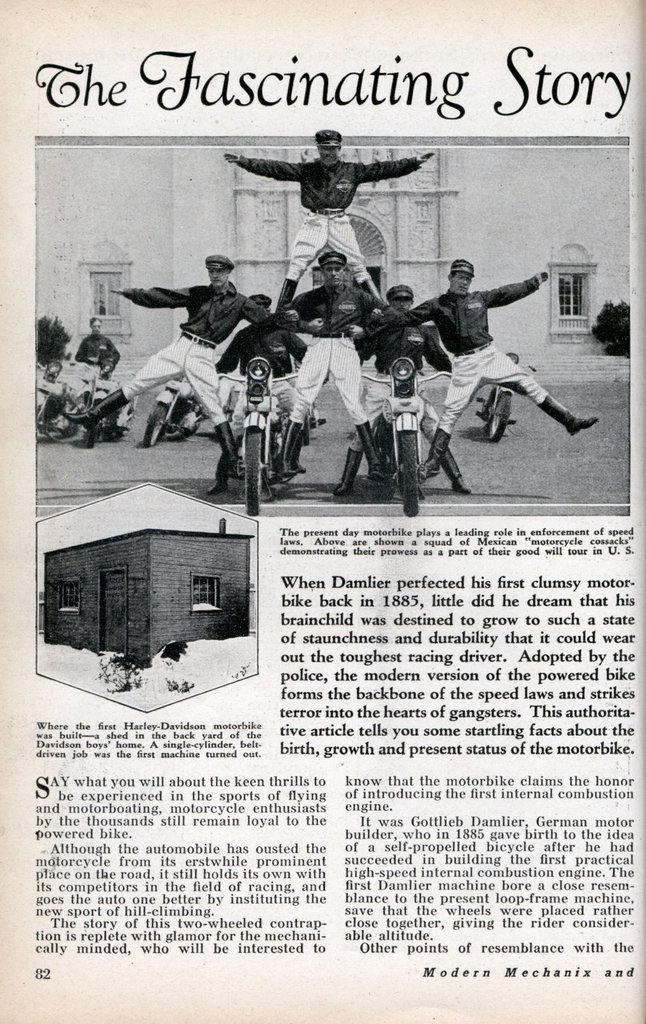 The Fascinating Story of Your Motorbike

When Damlier perfected his first clumsy motorbike back in 1885, little did he dream that his brainchild was destined to grow to such a state of staunchness and durability that it could wear out the toughest racing driver. Adopted by the police, the modern version of the powered bike forms the backbone of the speed laws and strikes terror into the hearts of gangsters. This authoritative article tells you some startling facts about the birth, growth and present status of the motorbike.

SAY what you will about the keen thrills to be experienced in the sports of flying and motorboating, motorcycle enthusiasts by the thousands still remain loyal to the powered bike.

Although the automobile has ousted the motorcycle from its erstwhile prominent place on the road, it still holds its own with its competitors in the field of racing, and goes the auto one better by instituting the new sport of hill-climbing.

The story of this two-wheeled contraption is replete with glamor for the mechanically minded, who will be interested to know that the motorbike claims the honor of introducing the first internal combustion engine.

It was Gottlieb Damlier, German motor builder, who in 1885 gave birth to the idea of a self-propelled bicycle after he had succeeded in building the first practical high-speed internal combustion engine. The first Damlier machine bore a close resemblance to the present loop-frame machine, save that the wheels were placed rather close together, giving the rider considerable altitude.

Other points of resemblance with the modern machine lie in the use of jockey pulley, or belt tightener principle, and in the steering mechanism, which has not been greatly altered over a course of 50 years.

However, in the drive, several noteworthy changes have been made from the original model. Damlier’s machine ran on a flat-belt drive from the pulley on the crankshaft to a larger member on the rear wheel. Today the chain drive is virtually universalâ€”only a few foreign models using the drive shaft idea.

Comical as it may sound to modern motorcycle fans, speed was controlled by permitting the drive shaft to slip or by applying the brake. This crude arrangement was made necessary because of the use of a sluggish vaporizer, a surface carburetor and hot tube ignition.

The pioneers who followed close upon the heels of Damlier made some slight alterations in the original. For one thing, the seat was lowered, so that the rider could rest his feet on the ground when not in motion. The Wolfmueller-Geisenhof, as this “advanced” job was dubbed, powered by a two-cylinder, two-horse horizontal motor, chugged along at the breath-taking speed of 24 miles per hour “Advanced” features of the mechanism may sound strange to present day machinists. The drive was direct from the motor cylinder to the traction member â€”much the same as in locomotive construction. The cylinders were water cooled, the water being carried on a clumsy tank that formed the rear mudguard. The air intake stood out like a searchlight, and altogether the machine was regarded as the last word in efficiency.

Motorcycle history in America began in 1901, when George M. Hendee, owner of a cycle factory, and Oscar Hedstrom, a designer of light racing bicycles, pooled their genius and introduced the Indian, a machine hardly comparable to the one we know today.

It was on May 25, 1901, that Mr. Hendee saw his first finished Indian give an actual road performance of starting, stopping, hill-climbing, and speed work. What it would do was indeed astounding in those days, and it implanted a faith in the two-wheeled motor vehicle that Mr. Hendee never relinquished, even though his early struggles to win approval were hard.

1907, the year of the panic, saw the entrance of the Excelsior and the Harley-Davidson motorcycles. The former came on the scene with a single cylinder, belt-driven machine. At the same time Hendee was engaged in developing a multi-cylinder job. Although the Cleveland, the Ace and the Thor arose as competitors, they have since passed into oblivion, leaving the field to the Indian, the Excelsior and the Harley-Davidson.

Competitive tests and races have always been prominent in the development of motorcycles. Long before the first tiny gasoline engine was hung in a bicycle frame there were bicycle races, and before that, stirring contests on the picturesque high wheelers. Naturally enough, as soon as there were a few gasoline-propelled cycles running around, contests of one kind or another followed as a matter of course.

These early contraptions were merely motorized bicyclesâ€”crude and unwieldy â€”with feeble powerplants that could be depended upon to stop at the most inopportune times. The top speed was all of 30 miles an hour but the early race rider got just as big a thrill as the modern speed hound experiences in burning up the road.

Motorcycle races were soon being held on horse tracks all over the country. The staccato crackling of the motors, the dust clouds, the pungent odor of burnt castor oil, the spine-tingling brushes and slides around cornersâ€”is it any wonder that the sport of motorcycling and racing attracted multitudes?

As the years passed, riders developed the technique of broad-siding the corners at higher speeds. More horsepower was built into the motors, along with greater durability and reliability. A great deal more was learned about fuels and lubrication. Frames and forks were reinforced and designed to facilitate handling of the machines at racing speed, and tires were improved.

It would take a large volume to record the deeds of these early knights of the handlebars. They contributed much to the development of the motorcycle for the tracks were proving grounds that speedily revealed mechanical defects and weaknesses.

A milestone in motorcycling progress was reached in 1913 when Lee Humiston officially covered a mile in 36 seconds on a board speedway near Los Angeles. He rode a two-cylinder Excelsior and was the first rider to attain the coveted speed of 100 miles an hour. The stunt was performed in the course of a 100-mile runâ€”which, incidentally, required more than an hourâ€” and it was years afterwards before any rider succeeded in covering 100 miles within the hour.

That honor belongs to Joe Petrali who came into prominence at the Altoona Speedway in 1925 by piloting a borrowed Harley-Davidson 100 miles in 59 minutes, 47 seconds, which was another of the big achievements in the motorcycle world. But â€”that’s getting ahead of our story!

During the years from 1915 to 1920, a second crop of great racing riders was developed, and the king of these was Gene Walker. Gene rode Indian machines year after year. He was amiable and had a keen sense of humor. On the track he was cool, calculating and foxy. His teammate, Shrimp Burns, was a more spectacular rider, willing to take the longest sort of chances. When Shrimp was in the lineup you could always expect fireworks. Red Parkhurst rode a Harley-Davidson and was another stellar performer as were Maldwyn Jones and Eddie Brink.

During the same period, the famous Harley-Davidson racing team was developed, comprising Hepburn, Ludlow, Weishaar, Davis and Otto Walkerâ€”the five Iron Horsemen. Whereas Walker and Burns were individual stars, the five horsemen teamed and worked together to an extent never before seen in motorcycling. Time and again the rivals met and the contests were always packed with thrills.

Another branch of motorcycling that has held the interests of fans is intercity and long distance record races. Wells Bennett broke nobody knows how many records riding Excelsiors and four-cylinder Hendersons. Bennett’s record from Los Angeles to New York still stands as does his 24-hour mark made at the old Tacoma Speedway in 1921.

Then there’s Cannonball Baker who has since won wide fame by driving cars of all kinds hither and thence in next to no time. He got his start in long distance competition on Indians. He and Bennett had many a duel over the road.

Interest in contests of this type has waned for several reasons. Primarily, they were of value because in the earlier days it was a wonderful feat for a motorcycle to hold together long enough for a cross-country trek.

These stunts impressed the multitudes with the durability and reliability of the machines. Modern traffic, however, makes road contests today hazardous and another angle, from the point of view of the manufacturers, is the inconsistency of defying police departments by breaking speed laws and then turning around and trying to sell them motorcycles for law enforcement.

No road records of any consequence have been attempted in recent years because most riders know that any modern motorcycle will stand more punishment than the rider himself can endure. In spite of this, though, motorcycle manufacturers are constantly besieged with requests for backing to enable young hopefuls to set new road records. Naturally very few requests are satisfied.