I have heard of women having their clitoris removed, but it is usually referred to as “genital mutilation” and is imposed upon women against their will. Do women still have their clitoris voluntarily removed because they think it is “unsightly”? Would a doctor actually perform that surgery? 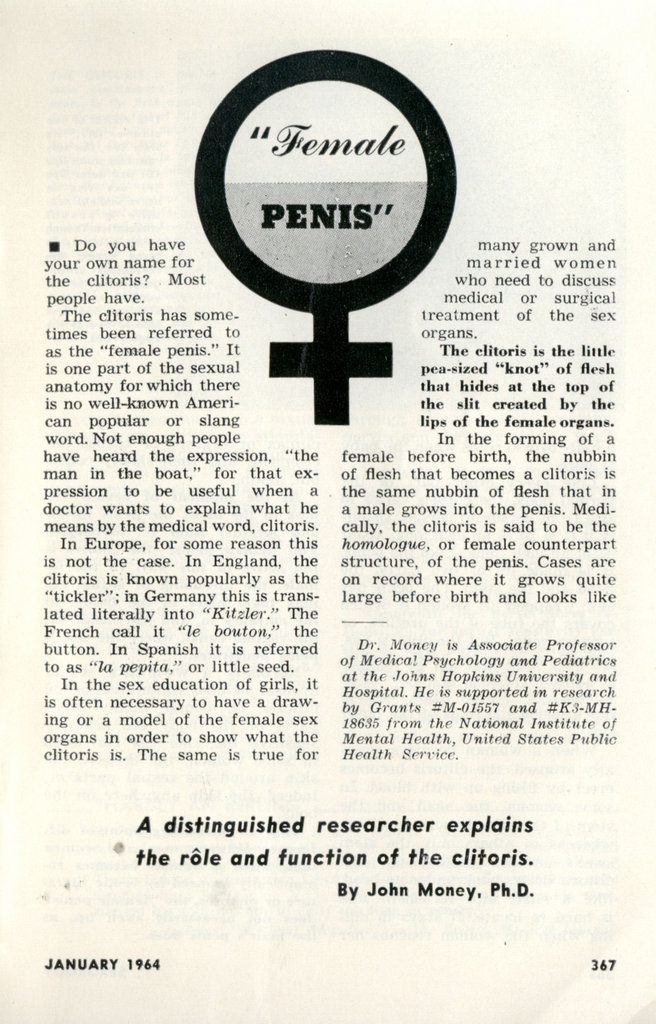 “Female Penis”
A distinguished researcher explains the role and function of the clitoris.

Dr. Money is Associate Professor of Medical Psychology and Pediatrics at the Johns Hopkins University and Hospital. He is supported in research by Grants #M-01557 and #K3-MH-18635 from the National Institute of Mental Health, United States Public Health Seervice.

Do you have your own name for the clitoris? Most people have.

The clitoris has sometimes been referred to as the “female penis.” It is one part of the sexual anatomy for which there is no well-known American popular or slang word. Not enough people have heard the expression, “the man in the boat,” for that expression to be useful when a doctor wants to explain what he means by the medical word, clitoris.

In Europe, for some reason this is not the case. In England, the clitoris is known popularly as the “tickler”; in Germany this is translated literally into “Ritzier.” The French call it “le bouton” the button. In Spanish it is referred to as “la pepita” or little seed.

In the sex education of girls, it is often necessary to have a drawing or a model of the female sex organs in order to show what the clitoris is. The same is true for many grown and married women who need to discuss medical or surgical treatment of the sex organs.

The clitoris is the little pea-sized “knot” of flesh that hides at the top of the slit created by the lips of the female organs.

Like every other part of the normal body, the clitoris varies in size from person to person. Usually it is 1/4 to 1/2 an inch long, about 1/4 of an inch thick. Like the penis, it is made up of two parts, the head and the stem. The penis has skin wrapped all around it, which covers the tube of the urethra, or urinary canal. But the clitoris has, instead, a cape or hood of skin, the ends of which (called the labia minora, or small lips) stretch down inside the folds of the outer lips.

When a woman becomes sexually aroused, the clitoris becomes erect by filling up with blood. In some women, the head and the stem of the clitoris both swell up, whereas in others only the stem swells. After swelling up, the clitoris draws back under its hood, like a snail into its shell, and is hard to locate. It stays in hiding when the woman reaches her climax or orgasm of sexual excitement, and then slowly comes out again.

At the moment of sexual climax in the male, the penis throbs and seminal fluid is discharged. The “female penis,” the clitoris, is not active in this way. In the female, the throbbing of sexual climax takes place in the tissues at the entrance to, and just inside of, the vaginal canal, where the man’s penis penetrates.

Normally a woman’s sexual arousal includes stimulation of the clitoris. Of course, many other parts of the body are sexually sensitive too, like the ear lobes in some women, the breasts, the skin around the sexual parts or, indeed, the skin anywhere on the body.

Even though the clitoris is sexually very sensitive, it is not essential to sexual arousal and sexual climax. Girls born with an enlarged and unsightly clitoris usually prefer to have it removed, for the sake of feminine appearance. Afterwards their sexual pleasure continues nevertheless, through adjoining and remaining nerves and they are able to reach a climax.

The same is true for women who have had to have the clitoris and all the surrounding skin removed because of a skin cancer. Men, too, who have lost the penis either accidentally or through surgical necessity are still able to reach a sexual climax.

Apparently the nerve fibers responsible for sexual sensitivity can still do their work, even when their endings in the skin have been cut away. The indispensable location of sexual climax, in the woman, appears to he the entrance way and first inch or two of the vaginal canal.