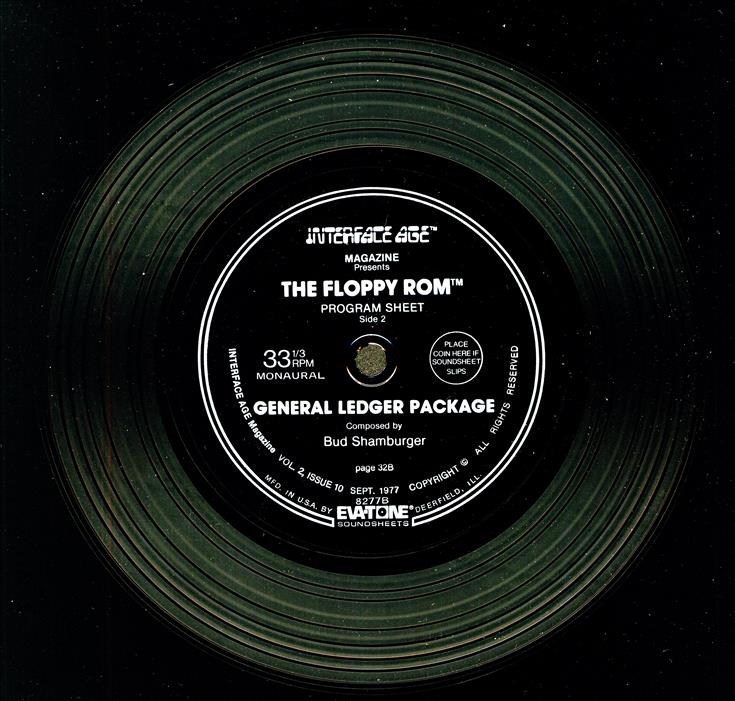 By popular request this month’s Floppy ROM™ is a business program rather than a software development program. The reception to Bud Shamburger’s General Payroll Package in the June issue was overwhelming with many additional requests for his General Ledger Package to be featured on a Floppy ROM™. This provided us not only a good technical challenge but also an editorial problem. Therefore, a few words are in order regarding the following business article. It will become immediately evident that a general ledger program worth its salt will be extensive in length and description.

From an editorial point of view the listing alone comprises over 80 pages not including the text. When you consider the amount of programming and the space which it must occupy on a Floppy ROM™ you realize that the Kansas City Standard and 300 baud will never cut the mustard on a 6-inch disc.

Now the Floppy ROM™ must reenter the experimental domain for higher baud rates and complexities. The results were quite pleasing as 1200 baud proved to be no problem for the crew and equipment at Eva-Tone, nor for those who spent long hours in preparing the program prior to transcription. Hats off to the good people at the Chicago Computer Store, Inc., Park Ridge, IL, who provided the computer equipment and technical expertise in the form of Lou Van Eperin, president; Jim Rembis, senior technician; and Terry Marshall, graduate student Northwestern University.

As most of you are aware the first Floppy ROM™ took nine months to debug and produce. Under the direction of Bill Turner and Bill Blomgren they were able to overcome the hardware and software idiosyncrasies in less than a week for this program. It has become quite clear that for future Floppy ROMs we will have to standardize on hardware that allows the maximum flexibility for the user to feed the data from the Floppy ROM™ directly into a computer. The philosophy behind this concept is that the original recording is made directly from a computer output to the master cutting head on a first generation basis. Having to record it on a tape subsequently provides at best a second generation program which potentially could contain bugs.

Over the next two issues we are providing in serial form the balance of the program source code so that you may take advantage of this program to tailor it to your own systems requirements. In some cases this will be very straightforward and in other cases may require a liberal amount of massaging. For those who have an Altair™ system containing 48K+ bytes of RAM, disc and Tarbell cassette interface, the work will be little more than lifting the tone arm and recording.

Should you have any technical questions regarding the program featured on the Floppy ROM™, I suggest you direct any inquiries to either Lou Van Eperin, Chicago Computer Store, Inc., Park Ridge, IL, (312) 823-2388; or Bill Turner, Southeast Regional Editor, INTERFACE AGE Magazine, P.O. Box 1234, Cerritos, CA 90701.

For those interested in the answers provided by many of our readers regarding the first Floppy ROM™ in the May 1977 issue, we will be publishing the results in our November issue. I strongly urge those of you who work with this month’s Floppy ROM™ to please answer the survey questions listed as they will directly influence our future Floppy ROM™ activities. Good Luck!

HOW TO LOAD THE FLOPPY ROM

WARNING . . . Failure to read this article before attempting to load the floppy may be hazardous to your health, especially if you do not have an 8080 system capable of running version 4.0 or 4.1 of ALTAIR DISC EXTENDED BASIC. This is an absolute requirement, as the programs are all stored on the FLOPPY-ROM in ALTAIR’s internal format. Also required is a TARBELL cassette interface strapped for 187 characters per second operation, an 80 column line printer, and a CRT terminal. A floppy disk drive and 48K of memory is also required.

Users of other BASIC systems will not be able to use the programs without first undertaking some sort of conversion activity. Most BASIC systems do not support the LPRINT command which is being used to direct printing operations to the line printer, and these commands would have to be changed to a “PRINT” statement. The other major area of incompatibility is due to the fact that the ALTAIR software does not allow programs to be saved on tape in a normal ASCII format. Instead ALTAIR software compresses the keywords into a unique one or two byte code and then saves the programs. This allows a faster operation to and from tape (less data to transmit!).

The best method of loading the programs into your 8080 computer system, according to Lou Van Eperin and Jim Rembis of the Chicago Computer Store, is to play back the FLOPPY-ROM on a medium grade stereo system and to re-record the data onto a cassette tape. The Tarbell interface is sensitive to both tone and volume settings, so expect to have to “diddle” the settings a little, either during recording or during playback of the cassette tape. Once you find the correct settings, you should have no further trouble. If there are any errors while trying to load the programs, they will usually show up as strange line numbers beyond the last valid line in each program. Should this occur adjust your volume and/or tone settings a little and try again. Use the information contained in Table 1 to assist you in verifying the accuracy of the program loads.

Each program was given a unique 1-character name on the cassette tape and this name should be used when loading the programs into your computer system.

After each program is loaded, you should then save it under its real name on the disk. A typical sequence would be:

The Disk names and the tape names can also be found in Table 1.

If you are normally running version 4.1 EXTENDED BASIC, then you should unload the cassette tape into your system using the Version 4.0 system, saving the programs on your disk in ASCII format. After loading all programs in this manner bring up version 4.1 and resave the programs on your version 4.1 diskette as normal program files. This will eliminate any possible problems regarding incompatibilities between version 4.0 and 4.1. This precaution may not be absolutely necessary, for I have been told that the internal codes in both 4.0 and 4.1 are supposed to be the same. However, I have no way of personally verifying this, as my own personal system is a SWTPC 6800.

The first thirty seconds on side 1 of your FLOPPY-ROM is a sync stream which will allow you to set the phase on your recorder if necessary. The running times of all the programs on the FLOPPY-ROM are identified in Table 1.

I would like to extend my personal thanks to Lou Van Eperin and James F. Rembis of the Chicago Computer Store for their assistance in producing this FLOPPY-ROM; also assisting was Terry Marshall, Don Tarbell, Bill Blomgren and Jimmy Hoehn located in Chicago, Los Angeles, Tampa and Tampa . . . Special thanks go to Norman Welch at EVA-TONE and his staff for the long hours that they devoted to this project; and last, but not least, if Bud Shamburger in Conwal, Arkansas hadn’t written the programs in the first place, then maybe I would have gotten some sleep in the evenings of the past four weeks . . .!