Modern Mechanix
Issue: Feb, 1931
Posted in: Automotive, Sign of the Times
12 Comments on The Great Wall of China to be Motor Highway (Feb, 1931) 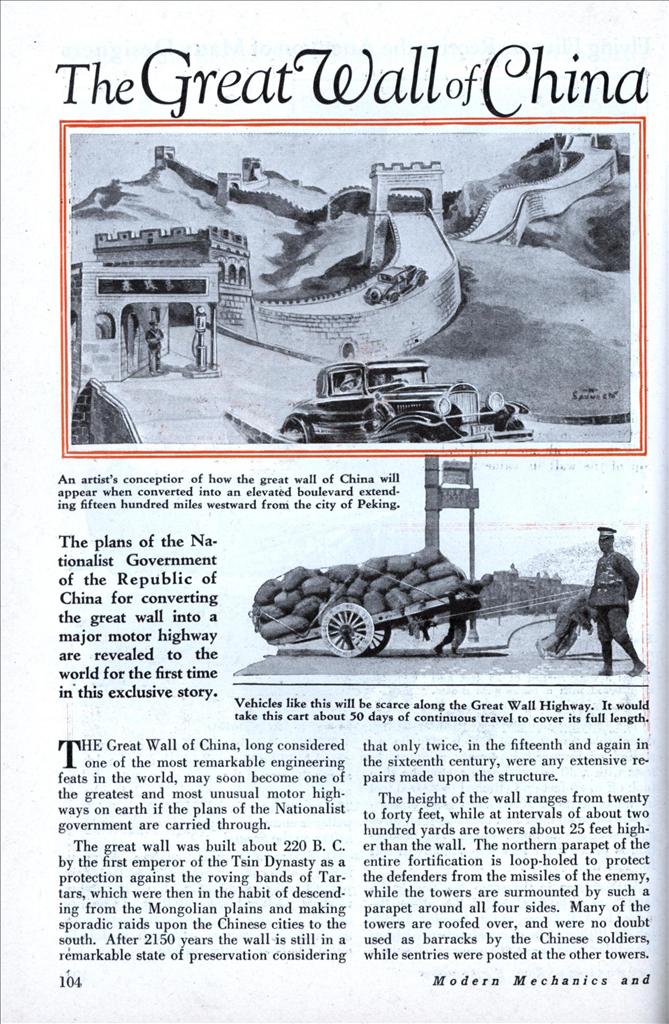 The Great Wall of China to be Motor Highway

The plans of the Nationalist Government of the Republic of China for converting the great wall into a major motor highway are revealed to the world for the first time in this exclusive story.

THE Great Wall of China, long considered one of the most remarkable engineering feats in the world, may soon become one of the greatest and most unusual motor highways on earth if the plans of the Nationalist government are carried through.

The great wall was built about 220 B. C. by the first emperor of the Tsin Dynasty as a protection against the roving bands of Tartars, which were then in the habit of descending from the Mongolian plains and making sporadic raids upon the Chinese cities to the south. After 2150 years the wall is still in a remarkable state of preservation considering that only twice, in the fifteenth and again in the sixteenth century, were any extensive repairs made upon the structure.

The height of the wall ranges from twenty to forty feet, while at intervals of about two hundred yards are towers about 25 feet higher than the wall. The northern parapet of the entire fortification is loop-holed to protect the defenders from the missiles of the enemy, while the towers are surmounted by such a parapet around all four sides. Many of the towers are roofed over, and were no doubt used as barracks by the Chinese soldiers, while sentries were posted at the other towers.

The wall is from fifteen to thirty feet wide at the base, and tapers inward to an average width of about twelve feet on top. Two solid masonry parallel walls from eighteen inches to four feet in thickness were first built, and the space between was then filled with loose stone and earth. Owing to lack of care, these outside walls have crumbled in places, but not to such an extent that their repair would be exorbitant.

Imagine, if you can, such a wall stretched across the United States. Starting at Washington, D. C, it would extend north to Cincinnati, then south around Cairo, Ill.; north again to Marshall, Missouri, south of Wichita, Kansas, and west to about fifty miles from Denver, Colorado—a serpentine path more than 1,500 miles in length.

With a smooth motor road laid on top of the wall its value to China would be enormous; for besides its unquestioned military value, enabling the government to stamp out the incessant banditry in the interior provinces, it would do much toward helping the rehabilitation of those who are isolated in this mysterious interior country, and who sometimes starve to death because food, plentiful on the coast, cannot be transported inland i*i time.