Life
Issue:
Posted in: Ahead of its time, Computers
22 Comments on The Handy Uses of a Home Computer ()

The Handy Uses of a Home Computer ()

This family gives new meaning to the term “early adopter”. Though at $7.50 an hour ($40 in 2007 dollars) it would almost be cheaper to send the kid to a casino to play blackjack. 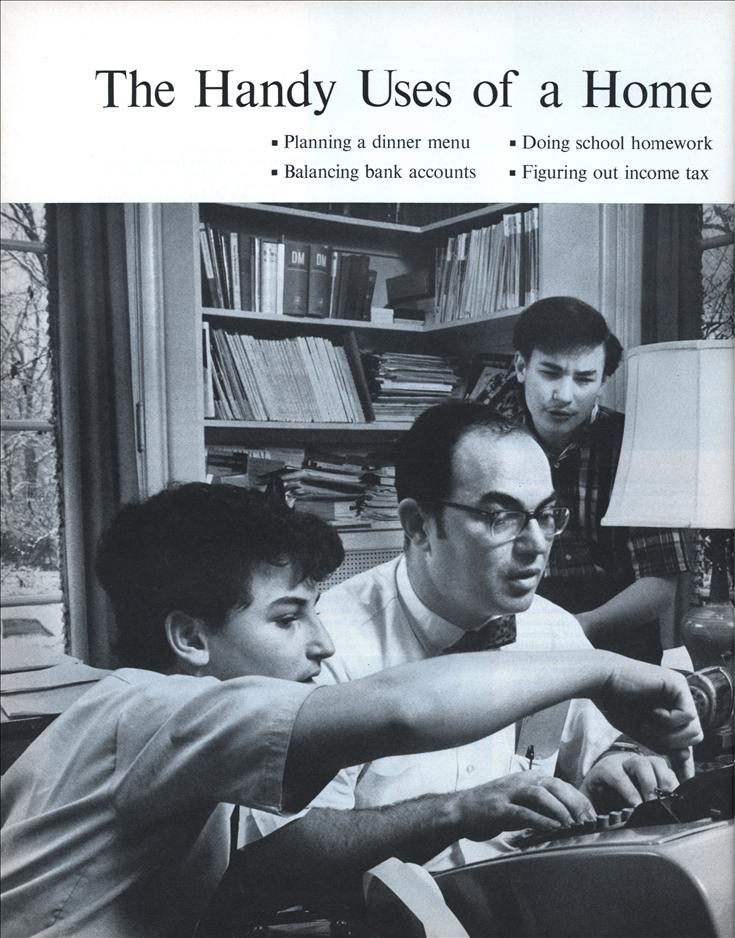 The Handy Uses of a Home Computer

Computers for the home have been envisioned by science fiction writers and engineers ever since a huge, unwieldy prototype was developed 25 years ago. The whole futuristic age they prophesied, with an omnipotent electronic monster named Horace in every living room, is still a long way from realization, but compact consumer computers have quietly entered the household. While the market hardly rivals TV sets or refrigerators, the computer-as-home-appliance is now more than just a toy for the wealthy or a mysterious instrument for technical specialists.

Those pioneer families who have one, like the Theodore Rodmans of Ardmore, Pa., have discovered their obedient machine can perform a large variety of useful functions. Dr. Rodman originally brought it home for medical research, but then his family found it could also plan mortgage payments, help out with homework, even play with the children. Although the cost is still high, computers like theirs have come within possible reach of a two-car family budget. A small, self-contained model is available for $8,000, complete. The Rodmans’ computer system, called time-sharing, uses a Teletype terminal connected to a big central unit via telephone. It costs $110 a month to rent, plus $7.50 per hour of use.

The Rodmans’ computer is no anthropomorphic robot that can accomplish physical feats. It cannot flip the light switch, monitor the thermostat or do the cooking. Rather, it is a sophisticated mental appendage with a capacity for problem-solving that is limited only by the family’s imagination. Neither Dr. Rodman nor his family had ever operated, much less programmed, a computer before a terminal was installed in their home last August. Since then they have assigned it so many chores that Mrs. Rodman says, half seriously, “It’s really become a member of the family.”

For me, the main physical effect of having a computer at home is that I’m able to spend a lot more time with my family,” says Dr. Rodman, who is a lung specialist on the faculty of Temple University medical school in Philadelphia. “For all of us the real impact is mental. Programming a computer is like thinking in a foreign language. It forces you to approach problems with a high degree of logic. Because we always have a computer handy, we turn to it with problems we never would have thought of doing on one before.”

Mrs. Rodman heads the Department of Consumer Affairs in the Philadelphia public high schools. When the budget for which she is responsible failed to match the schools’ figures, her husband fed it to their computer. Then, armed with a lengthy print-out, she confronted her startled supervisor, who had been all set to explain her errors to her by using a print-out from his computer.

David, 14, the Rodmans’ oldest son, did a similar favor for his father one night. Seeing him struggle with pencil over the family bank account, David programmed it. The Rodmans now compare every bank statement against those prepared by their machine.

The youngest Rodman, Kevin, 11, is a picky eater with tastes limited to tossed salads, pies, steaks and sloppy joes. Some nights his mother made meals he would scarcely touch. This gave his older brother, Mitchell, 13, the idea for a computer program he named, appropriately, “Eat.” Mitchell first asked Kevin all the foods he was willing to eat and divided them into categories by course. He then wrote a program that can print out, at random, a weekly menu listing dishes for each meal and day. Three thousand different meal combinations are possible. (If Kevin would eat just one more kind of salad besides tossed, there would be 6,000 possibilities.) The print-out, after serving as Mrs. Rodman’s shopping list, is posted on the kitchen wall, always with the same message that Mitchell has instructed the computer to print at the bottom: NO SUBSTITUTIONS PLEASE UNLESS ABSOLUTELY NECESSARY.

Although Kevin himself has not yet shown any interest in programming, he does interact with the machine through stored demonstration programs. One of them is the card game Black Jack. When Kevin activates the computer, it grants him an imaginary $500 to gamble with. The machine then “deals” by printing both its own and Kevin’s cards from a random selection. After totaling the visible cards, it asks if it should deal another. When each hand is finished, it computes how much of Kevin’s money is left and offers condolences if he has gone broke.

When he got the computer for his home, Dr. Rodman had no idea his family would become so involved with it. His original project, which he is still working on, was to write a program for diagnosing lung ailments through test readings. Because a successful program will mean instant written diagnoses and also teach interns, Temple University agreed to pay for it.

Because he was a novice at programming, Dr. Rodman required uninterrupted access to a computer. The service he purchases hooks his terminal, a standard Teletype, through his telephone to a large computer 90 miles away in Teaneck, N.J. When the central unit is dialed, it responds with an audio pitch. An electronic device connected to the Teletype translates the computer’s messages to print.

The computer costs $110 a month terminal rental, plus $7.50 to $11 an hour. Once a program is stored, the cost is negligible. “Eat,” for example, costs the Rodmans about 10c for a weekly run-through. The computer, of course, does the bookkeeping for the bill.

Dr. Rodman can also retrieve the program he writes at home by connecting a terminal in his office or anywhere else in the U.S. where there is a telephone. Through a time-sharing system, up to 200 remote terminals can use the central computer simultaneously because the actual time it needs to service each one is a fraction of a second. General Electric, from whom the Rodmans buy their time-sharing, also offers a library of stored prepared programs which range from the Black Jack game to stock purchase calculations. A real mass home market for computers awaits stored programs of broad practical use to homeowners.

Another impetus will come from kids who learn programming in school and accept the computer as a natural tool. Both Mitchell and David use it instead of pencil and paper to figure out their math homework. The teachers are pleased because it forces the two pupils to think out the problems. And classmates often call the boys up for assistance. Meanwhile at home spare-time programming, like “Eat,” has replaced TV as the boys’ major diversion. While both are bright, neither is an exceptional student. And as they grow older, explains Mitchell, “It would be silly not to use a computer if it’s easier and you’re used to it.”

Helping their father program is a regular household chore, and they are now better at it than he is. “One Sunday morning,” recalls Mrs. Rodman, “Ted had to plead with the boys to stop reading the funnies and please come explain to him what he was doing wrong. Since we got the computer,” she adds, “no one’s ever bored around here anymore. When the medical project is over, we’ve decided to buy our own terminal. It’s certainly a better investment than an automobile.”