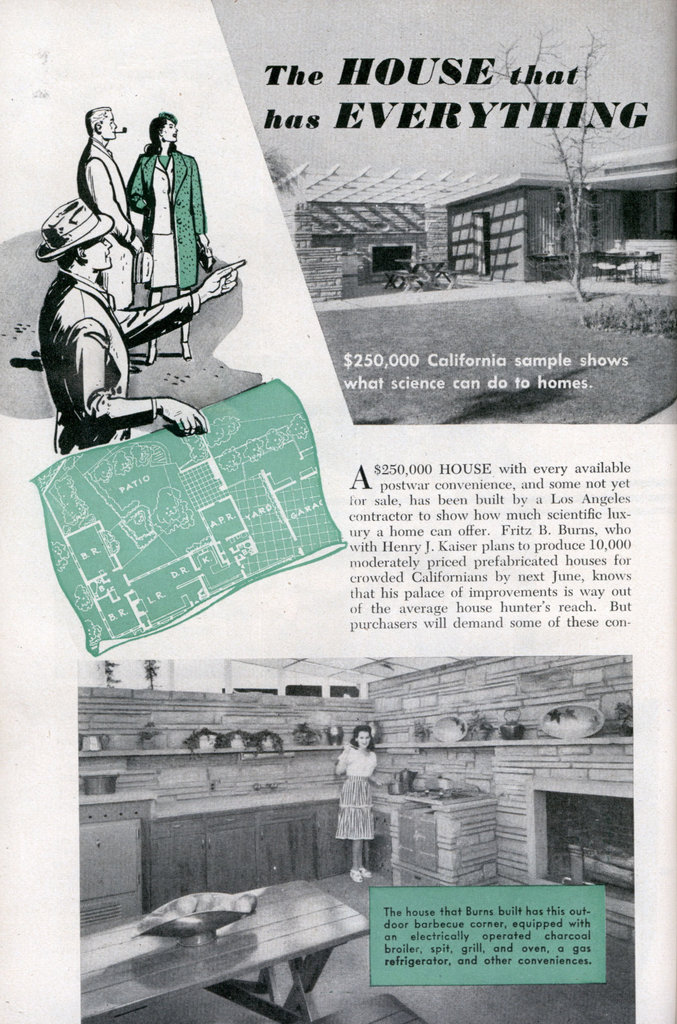 The HOUSE that has EVERYTHING

$250,000 California sample shows what science can do for homes.

A $250,000 HOUSE with every available postwar convenience, and some not yet lor sale, has been built by a Los Angeles contractor to show how much scientific luxury a home can otter. Fritz B. Burns, who with Henry J. Kaiser plans to produce 10,000 moderately priced prefabricated houses for crowded Californians by next June, knows that his palace of improvements is way out of the average house hunter’s reach. But purchasers will demand some of these conveniences in low-cost homes, he believes, and Burns and Kaiser intend to provide them.

Under its aluminum-shingled roof, Burns’s house has only two bedrooms, two baths, living and dining rooms, garage, and extra space for hobbies or old trunks. But its sewing machine disappears, there are electric toothbrushes in the bathrooms, and ultraviolet rays keep the medicine chests sterile.

Picture windows and decorated walls beautify the living room. In the kitchen, where circular shelves rotate to save steps, there is a “nerve center”â€”a control board from which the housewife can manipulate the lawn and garden sprinklers, raise the garage door, and turn on her radio. From here, she can talk to every room in the house. In a cabinet in the master bedroom, infrared lamps dry her stockings in a jiffy.

The kitchen’s hydraulic dish washer lifts a basket to receive dirty plates and lowers them into churning soapy water. The filtering unit in the sink traps grease, while the garbage-disposal unit even chews up bones. The clothesline raises and lowers itself at the touch of a button.

Radio entertainment is available in every room. There are two high-fidelity receivers behind sliding panels at the left of the fireplace. And the house contains recording equipment, an automatic record player, and a built-in television receiver.

Tiny bulbs glowing under plastic pushbutton plates show guests where to turn off lights. Because this system carries low-voltage electricity it uses open bell wire from switches to fixtures instead of conduit or heavy wire. And there is never a burned-out fuse to change; a main circuit breaker in the garage takes care of that. It feeds current to a pair of circuit-breaker panels elsewhere in the house, and if a short circuit causes a momentary overload, these circuit breakers automatically close a small switch. To restore the current, someone merely flicks the switch open.

There are no drafts or cold floors in the Burns house; “Moduflow,” an automatic temperature-control system, balances heat input and loss. And dust is unknown. An electronic system called the Precipitron clears the air of all dirt and foreign particles. Air passing through the Precipitron flows over many strands of fine tungsten wire, thinner than human hair. These wires, carrying electricity, charge dust negatively. Positively charged plates then pull dust out of the air.