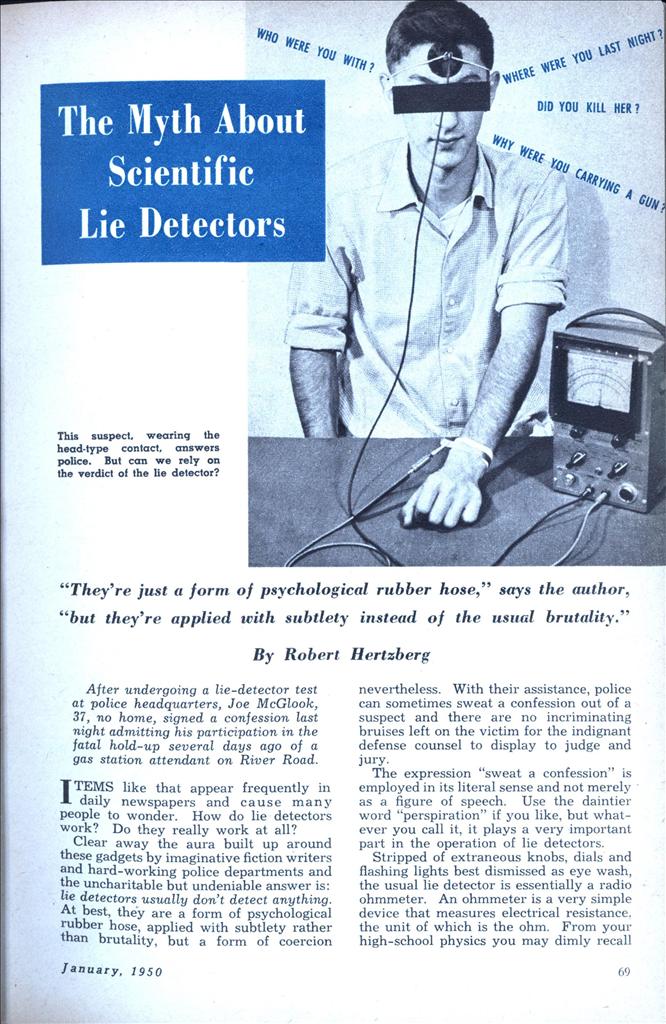 The Myth About Scientific Lie Detectors

“They’re just a form of psychological rubber hose,” says the author, “but they’re applied with subtlety instead, of the usual brutality.”

After undergoing a lie-detector test at police headquarters, Joe McGlook, 37, no home, signed a confession last night admitting his participation in the fatal hold-up several days ago of a gas station attendant on River Road.

ITEMS like that appear frequently in daily newspapers and cause many people to wonder. How do lie detectors work? Do they really work at all?

Clear away the aura built up around these gadgets by imaginative fiction writers and hard-working police departments and the uncharitable but undeniable answer is: lie detectors usually don’t detect anything. At best, they are a form of psychological rubber hose, applied with subtlety rather than brutality, but a form of coercion nevertheless. With their assistance, police can sometimes sweat a confession out of a suspect and there are no incriminating bruises left on the victim for the indignant defense counsel to display to judge and jury.

The expression “sweat a confession” is employed in its literal sense and not merely as a figure of speech. Use the daintier word “perspiration” if you like, but whatever you call it, it plays a very important part in the operation of lie detectors.

Stripped of extraneous knobs, dials and flashing lights best dismissed as eye wash, the usual lie detector is essentially a radio ohmmeter. An ohmmeter is a very simple device that measures electrical resistance, the unit of which is the ohm. From your high-school physics you may dimly recall Ohm’s Law which states that the rate of flow of electricity in a circuit, expressed in amperes, depends on the pressure in volts and on the resistance in ohms of the conductors through which the current passes. The ohmmeter is the basic tool of electronic technicians the world over. Millions are in use.

Ordinarily, we think of electrical conductors in terms of metallic objects, particularly copper wire and brass fixtures which have very low resistance. However, many non-metallic materials also are conductors, although to a lesser and irregular degree, depending especially on the presence of moisture and chemicals. The human body is a case in point.

If an arm is considered an electrical conductor, and the test wires of an ohmmeter are applied to the elbow and the middle finger, just to use two convenient points, the instrument will indicate a value in ohms. The actual figure will depend on the contact area of the test leads, the length of the arm and the condition of the skin. Some people have naturally dry skins, so the resistance is high; others have slightly sweaty skins, and their resistance is much lower.

I conducted the foregoing experiment on my left arm, using a standard RCA radio-shop ohmmeter. With the skin rubbed dry, when I made contact near the elbow, the meter registered about 1,000,000 ohms. I then moistened the elbow by applying a bit of saliva with my finger, put the test lead back and watched the needle swing over to about 350,000 ohms!

Using a couple of steel hand grips connected to the test leads, and with my palms moistened slightly with salt water to simulate perspiration, I could make the needle dance up or down irregularly, depending on how I loosened or clenched my fists.

I made repeated tests on several adults and teen-age boys and girls over a period of two days, using wrist, palm and head electrodes. These people were comfortably seated in pleasant surroundings and were under no mental stress whatsoever, yet in almost every case the meter needle jiggled erratically, proving absolutely nothing.

For a detector to detect anything, there must first be a set of reference readings to indicate normal reaction; any departures might then possibly be interpreted as something other than normal. However, sharp changes in the surface resistance of the skin produced by an outbreak of perspiration during a period of stress, doesn’t mean that a person is answering questions falsely or truthfully. Almost anybody will perspire if he is annoyed enough or nervous enough whether he’s guilty or innocent.

Certain advanced forms of the lie detector make an inked record of a suspect’s reactions on a continuous strip of paper. Such recorders are common laboratory and industrial instruments. The individual is questioned at great length, sometimes over a period of days, during which time his general attitude and behavior are observed closely. Often, careful and skillful questioning by itself elicits valuable and pertinent information, regardless of what the detector detects.

The psychologists study the record seriously and try to formulate an honest opinion based on their interpretations of the readings. It is significant, however, that judges of many high courts refuse to accept lie detector “evidence” as such, on the simple premise that no inanimate machine is capable of plumbing the depths of the human mind. A psychologist presented as an expert witness may offer other relevant testimony, as might a handwriting expert or a firearms expert, but whether the court or the jury believes his evidence is another question.

In the unfamiliar, unpleasant atmosphere of a drab police station, with a spot light glaring in his eyes and with a couple of wires tied to his body as if he were undergoing execution, an innocent man is more likely to become sick and frightened than an experienced law breaker. Prodded with questions and perhaps by something more solid in the form of a night stick, he’ll sweat down to his shoes and probably faint. The lie-detector needle meanwhile will resemble the movements of a fan dancer trying to keep cool on a hot night.

Admittedly, a lie detector sometimes does contribute to the psychological breakdown of an offender who really has something to confess. However, it’s the dramatic use of the apparatus, not its actual performance, that usually does the trick. Consider the mental level of a criminal, especially one dumb enough to get caught. His mind is slightly— or considerably—twisted, and he doesn’t think very clearly or logically. He is probably superstitious, because superstition flowers in ignorance. He is readily impressed by pseudo-scientific mumo-jumbo and thus the ideal customer for the lie detector. The cops don’t even have to turn the equipment on. They can make a great pretense of fiddling with the control, throw questions at the guy and wait for him to “sing.”

It isn’t always quite that pat, however. The suspect might be so moronic that he doesn’t understand what’s going on. or he might be smart enough to out-talk his inquisitors. All police can do is report “inconclusive results.”

The psychological impact of a bizarre “scientific test” on an impressionable mind was illustrated during my measuring trials. One of my subjects was a neighbor who thought the test would be fun. As I was getting the apparatus in order she recoiled slightly, turned a bit pale, and exclaimed in a thin voice, “Oh, I’m beginning to feel the current!” I looked at her in astonishment because the meter wasn’t even hooked up! And even if it had been, the current at the most would have been about a half-millionth of an ampere, not enough to twinge the muscles of a gnat! She was so fidgety that the meter readings fluctuated over a 100 to 1 ratio.

It is old stuff for radio technicians to bring a sensitive ohmmeter to a party and to use it on unsuspecting females to gauge their Kiss Appeal or Love Power. The girl holds one hand grip, the man the other. Their lips (moist and highly conductive) meet, the meter needle swings wildly across the scale and the delighted onlookers roar their approval. As a stunt, it’s huge fun. But as a scientific lie detector, it’s “myth-leading.”