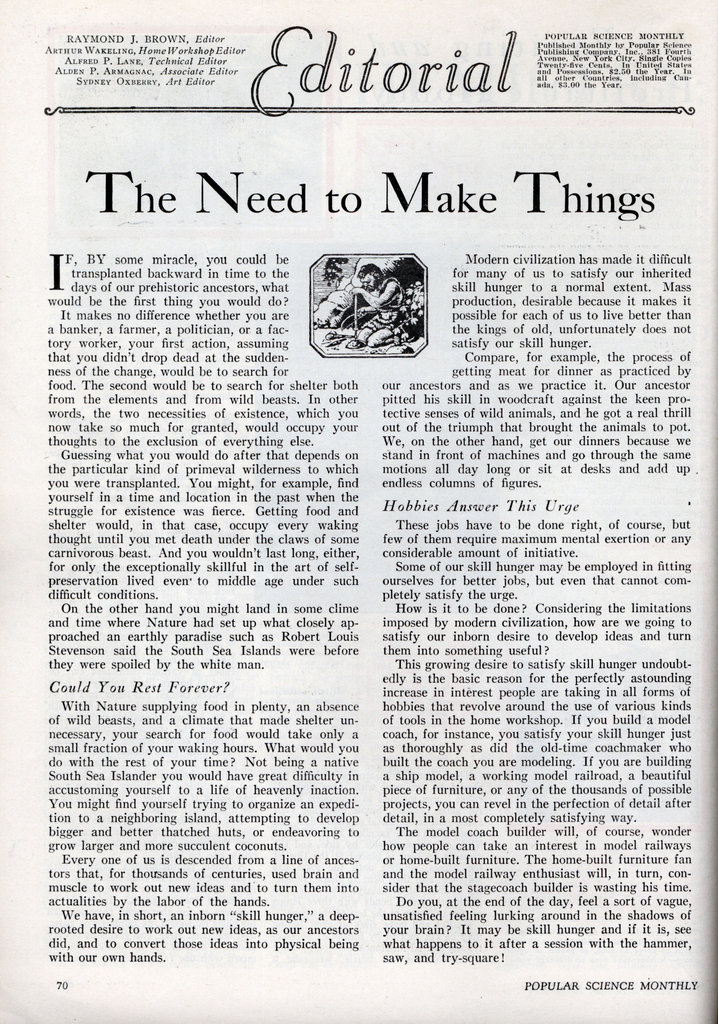 The Need to Make Things

IF, BY some miracle, you could be transplanted backward in time to the days of our prehistoric ancestors, what would be the first thing you would do?

It makes no difference whether you are a banker, a farmer, a politician, or a factory worker, your first action, assuming that you didn’t drop dead at the suddenness of the change, would be to search for food. The second would be to search for shelter both from the elements and from wild beasts. In other words, the two necessities of existence, which you now take so much for granted, would occupy your thoughts to the exclusion of everything else. Guessing what you would do after that depends on the particular kind of primeval wilderness to which you were transplanted. You might, for example, find yourself in a time and location in the past when the struggle for existence was fierce. Getting food and shelter would, in that case, occupy every waking thought until you met death under the claws of some carnivorous beast. And you wouldn’t last long, either, for only the exceptionally skillful in the art of self-preservation lived even to middle age under such difficult conditions.

On the other hand you might land in some clime and time where Nature had set up what closely approached an earthly paradise such as Robert Louis Stevenson said the South Sea Islands were before they were spoiled by the white man.

Could You Rest Forever?

With Nature supplying food in plenty, an absence of wild beasts, and a climate that made shelter unnecessary, your search for food would take only a small fraction of your waking hours. What would you do with the rest of your time? Not being a native South Sea Islander you would have great difficulty in accustoming yourself to a life of heavenly inaction. You might find yourself trying to organize an expedition to a neighboring island, attempting to develop bigger and better thatched huts, or endeavoring to grow larger and more succulent coconuts.

Every one of us is descended from a line of ancestors that, for thousands of centuries, used brain and muscle to work out new ideas and to turn them into actualities by the labor of the hands.

We have, in short, an inborn “skill hunger,” a deep-rooted desire to work out new ideas, as our ancestors did, and to convert those ideas into physical being with our own hands.

Modern civilization has made it difficult for many of us to satisfy our inherited skill hunger to a normal extent. Mass production, desirable because it makes it possible for each of us to live better than the kings of old, unfortunately does not satisfy our skill hunger.

Compare, for example, the process of getting meat for dinner as practiced by our ancestors and as we practice it. Our ancestor pitted his skill in woodcraft against the keen protective senses of wild animals, and he got a real thrill out of the triumph that brought the animals to pot. We, on the other hand, get our dinners because we stand in front of machines and go through the same motions all day long or sit at desks and add up . endless columns of figures.

These jobs have to be done right, of course, but few of them require maximum mental exertion or any considerable amount of initiative.

Some of our skill hunger may be employed in fitting ourselves for better jobs, but even that cannot completely satisfy the urge.

How is it to be done? Considering the limitations imposed by modern civilization, how are we going to satisfy our inborn desire to develop ideas and turn them into something useful?

This growing desire to satisfy skill hunger undoubtedly is the basic reason for the perfectly astounding increase in interest people are taking in all forms of hobbies that revolve around the use of various kinds of tools in the home workshop. If you build a model coach, for instance, you satisfy your skill hunger just as thoroughly as did the old-time coachmaker who built the coach you are modeling. If you are building a ship model, a working model railroad, a beautiful piece of furniture, or any of the thousands of possible projects, you can revel in the perfection of detail after detail, in a most completely satisfying way.

Do you, at the end of the day, feel a sort of vague, unsatisfied feeling lurking around in the shadows of your brain? It may be skill hunger and if it is, see what happens to it after a session with the hammer, saw, and try-square!