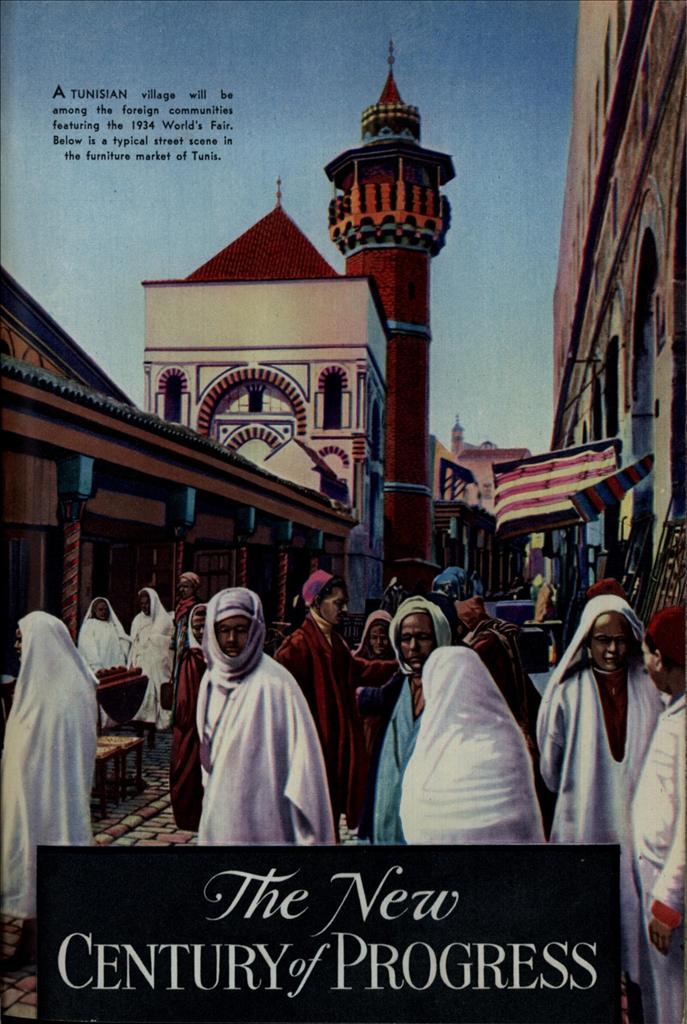 The New Century of Progress

HOW would you like to make a trip around the world in a day, stopping for an hour or two in England and Prance, seeing the sights of Italy, Spain, Ireland and Switzerland, paying a visit to Germany and China and catching a glimpse of such out-of-the-way places as Tunis and Morocco ?

This is part of the lure of the Century of Progress for 1934 which has been transformed into an international exposition by adding to the wonders of industry and science shown last year more than a dozen foreign villages, each a faithful miniature of the nation it represents.

These foreign communities, depicting the architecture, industries, customs and dress of most of the principal countries of the world, will give visitors an insight into other nations which could be obtained otherwise only by expensive travel or by weeks of intensive reading and research.

The mediaeval Belgian village of last year which charmed millions of visitors with its age-weathered stone towers, winding cob- bled streets, quaint buildings, old-world population and exact detail of life in Flanders, gave the cue for the many-picturesque communities this year and forms the nucleus about which cluster these villages of the nations.

One of the most elaborate is the Spanish village whose three acres are covered with reproductions of historic castles and other structures from the six most famous provinces of Spain. To produce these feudal towers in exact detail, architects and antiquaries made moulds and rubbings on the spot from the ancient buildings themselves. Casts were made in plaster from the moulds, and these casts formed the models for making exact duplicates and providing the same coloring. Native people wind through the old streets lined with Spanish workshops and restaurants.

Reminiscent of the Moorish conquests is the Tunisian village, a typical North African hamlet with its “souks” or bazaars, a mosque where a priest calls the faithful to prayer and an Arab theater presenting native entertainment and music. Appropriately near is the “Oasis,” representing a Bedouin village on the edge of the great desert. Bedouin war dances.

drills of the French Foreign Legion and native craftsmen hammering their silver and brass ornaments will greet visitors here.

The entrance to old Italy is a reproduction of the gateway of Signa with a tower representing the Campanile of San Gimignano. Here the visitor finds himself in the Piazza Benito Mussolini, with the Vias Marconi and Cristoforo Colombo to his left and right while before him rises an antique temple. A leaning tower from Bologna, a reproduction of a feudal tower of the thirteenth century is another feature.

The Swiss Alpine village has as background a reproduction of the mountains with synthetic snow, chalets and St. Bernard dogs. This village is a reproduction of the older portions of Berne where Swiss watch makers, yodelers and native dancers entertain visitors. Nearby is the German Black Forest village, a winter scene with synthetic snow and icicles, snow covered hills and a frozen mill pond in the center for ice skating all summer long. Air conditioning plays an important part in carrying out the illusion of cold weather by maintaining the buildings of this group at low temperatures. Around the mill pond are shops showing German home industries.

The French village this year represents a section of the old Montmartre quarter of Paris and the England of the sixteenth century is brought back in the Old English community which includes a reproduction of part of the famous Cheshire Cheese Inn of London, resort of Samuel Johnson and his literary cronies. Sulgrave Manor, ancestral residence in England of George Washington’s family, the cottage of Anne Hath- away, Shakespeare’s sweetheart, the church where Gray wrote his “Elegy in a Country Churchyard” and the gateway of the Tower of London are other reproductions.

America is represented in this galaxy of nations by a Colonial village with reproductions of Washington’s birthplace, Franklin’s print shop, Paul Revere’s house, Pilgrim cottages and a village smithy. Old North church dominates one vista of this community and Mount Vernon the other.

The Chinese village portrays a gay and colorful section of the streets of Shanghai. Pagoda towers eight stories high and painted in brilliant hues mark the entrance to a colony of typical Chinese buildings of brilliant mandarin red, jade green, Chinese yellow, blue and gold. Chinese shops, theaters and restaurants contain native merchants and craftsmen and the narrow streets are illuminated by thousands of Chinese lanterns.

Nestling in the deep green moss, ferns and shrubbery of its native heath and flanked by a setting of blue-flowered flax, peat bogs, thatched cottages and ancient gray castles, the Irish village typifies the life and activities of all the counties of Ireland. There is a reproduction of Tara’s hall, famed in literature as the meeting place of Irish kings, clergy, princesses and bards. A Creole village, a Mexican colony and a section of old Vienna also nestle in the international section.

The largest new structure erected for the 1934 fair is the Ford exposition building, 900 feet long, 110 feet high and situated in an eleven acre tract. The main section of the structure is cylindrical with a sawtooth wall on the outside and three similar sawtooth walls set back at intervals as the structure rises. This gives the impression of a set of four gears and the idea of motion is supplied to the gears by lights, thus presenting a gigantic optical illusion.

The structure is to house a drama of transportation, depicting the development of passenger vehicles from the early chariots of the Egyptian kings to the automobile of today with a moving spectacle of all the industries which contribute to the automobile today, including the parts played by farms, mines and factories.