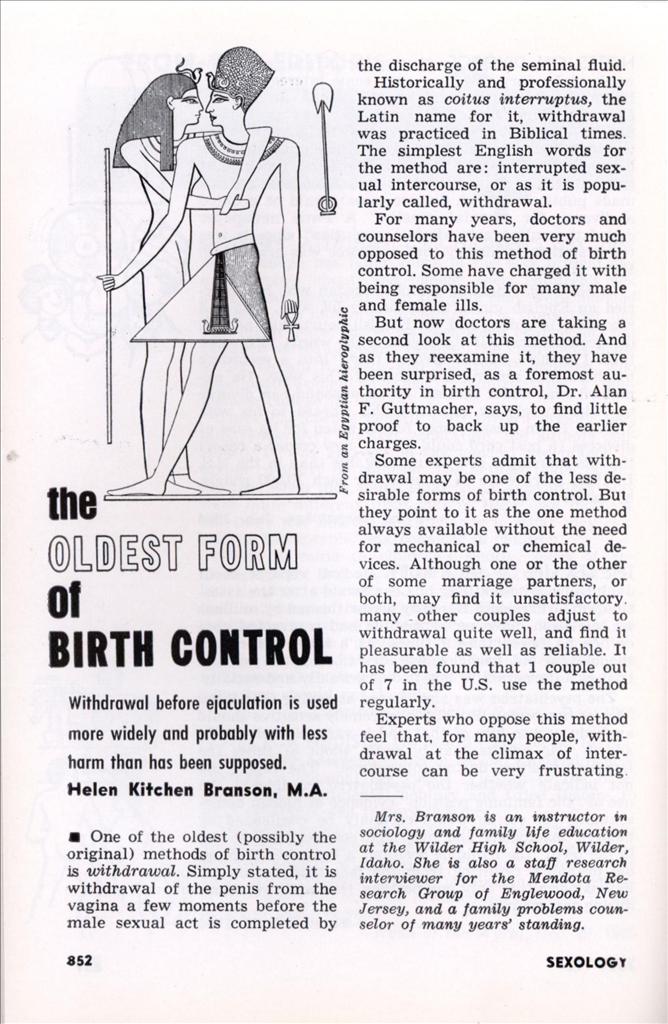 For many years, doctors and counselors have been very much opposed to this method of birth control. Some have charged it with being responsible for many male and female ills.

But now doctors are taking a second look at this method. And as they reexamine it, they have been surprised, as a foremost authority in birth control, Dr. Alan F. Guttmacher, says, to find little proof to back up the earlier charges.

Some experts admit that withdrawal may be one of the less desirable forms of birth control. But they point to it as the one method always available without the need for mechanical or chemical devices. Although one or the other of some marriage partners, or both, may find it unsatisfactory, many other couples adjust to withdrawal quite well, and find it pleasurable as well as reliable. It has been found that 1 couple out of 7 in the U.S. use the method regularly.

Experts who oppose this method feel that, for many people, withdrawal at the climax of intercourse can be very frustrating They feel that the husband is under continual anxiety during intercourse, and that the wife may be left disappointed and unsatisfied if she fails to reach her orgasm when her husband has his climax.

Anxiety in the husband, of course, is very individual in its effects. It may make some men completely impotent. Others will show little or no concern. Some men engage in withdrawal with no feeling of frustration. The husband who feels he may lose control, or who prefers the condom or another method, would probably use withdrawal only in an emergency.

The individual needs of women also vary widely. Some can have an orgasm almost immediately. Experts agree that the emotional and physical excitation of the wife is important. If she is well-aroused and responsive, she may be able to enjoy full satisfaction when he withdraws at his peak. If his climax should come before hers, he could relieve her tension by clitoral manipulation.

There is no definite evidence which proves that withdrawal intercourse is physically harmful to either sex. Emotionally, however, there are situations in which its prolonged and regular use might lead to frustration, when other methods could be more gratifying with superior results in preventing unwanted pregnancies.

Those who use the withdrawal method for the control of conception, should observe a few simple precautions.

Many men do not realize that they often release sperm in their pre-intercourse lubricating liquid. This preliminary liquid should be wiped off the penis before intromission. This precaution is desirable to help avoid the possibility that some live sperm may be carried into the womb, and possibly impregnate an egg.

The husband must also exercise careful control. Even a drop of semen in the vagina is dangerous since the first few drops of the ejaculate contain the greatest concentration of, sperm.

If there should be an ejaculation before withdrawal, a douche may be helpful in preventing conception. If the semen can be washed out of the vagina before any sperm have a chance to enter the womb, a pregnancy will not occur. Of course, the douche should not be relied on, but it is better than nothing.

In spite of the fact that there are more effective contraceptive methods than withdrawal, why is it so popular, and why do some doctors approve it for many classes of patients?

Withdrawal is always available for instant use. It is free. There is nothing to buy, nothing to prepare.

In a broad study of family planning in which the views of doctors were asked, most of them felt that contraceptive jellies, condoms and diaphragms were more effective than withdrawal. But they all emphasized that, particularly among the less educated and lower income families, the success of a method depends on its being one they will really use, and have readily available at all times. One doctor said: “It’s better to have something effective 80 per cent of the time, and know that it is practical for all situations, than to prescribe something that will only be used one-third of the time because it must be purchased.

“Whether the reason is lack of funds, laziness, or inability to make proper use of other contraceptive methods, coitus interruptus has the advantage that it is always available to the couple who really want to prevent unwanted pregnancy.”

In a recent study, I interviewed 100 married couples about their use of the withdrawal method.

I found that almost 1 out of 4 (23 couples) used withdrawal exclusively as their birth control method. Ninety-two of them had used it at least once, 17 had used it “frequently” and 22 used it “quite often.”

These 100 couples were lower income families living in towns and cities. Their annual incomes were between 53,600 and $5,000. All the families had 2 children. Some had 3 or 4.

A vast majority—87 per cent— felt that they had controlled pregnancy reasonably well or very well. Only 14 per cent reported unwanted pregnancies.

However, in other data I have seen on the withdrawal method unexpected conceptions resulted in a failure rate of from 50 per cent to 60 per cent. The source of such data is not stated, so it is difficult to compare this type of child spacing with others.

Although withdrawal is in widespread use and acceptance, very little is written about it. Some reliable sources on marriage counseling list it as undesirable, unadvised, or never advised.

But apparently many doctors do advise it in some circumstances. In the study of family planning referred to earlier, 29 doctors were asked about their attitude to withdrawal. These doctors were specialists, who limit their practice to obstetrics and gynecology. All were members of the American Medical Association. They were non-Catholic in religious preference and background.

Their replies indicated that all but one had at some time advised withdrawal as one form of birth control. Estimates of its effective- ness ran from 75 per cent to 90 per cent when used as directed.

Four doctors, who felt withdrawal was not the most effective method, advised it because of the economic situations of the families they served. Three doctors knew of no reason why withdrawal should be unhealthful, physically or mentally, as long as it was accepted by a couple as the best method for them.

In conclusion, it may fairly be said that the withdrawal method is a sort of compromise, like many other factors in sexual expression. Some couples accept it and enjoy mutual gratification. For most, perhaps, it may be a temporary or emergency method. Still other couples would never use it if it ended in emotional and physical distress.

The choice of a contraceptive method is a very personal decision. The advice of a doctor or marriage counselor is important, but in the final analysis the best method of birth control is the method which the individual likes and uses most consistently.