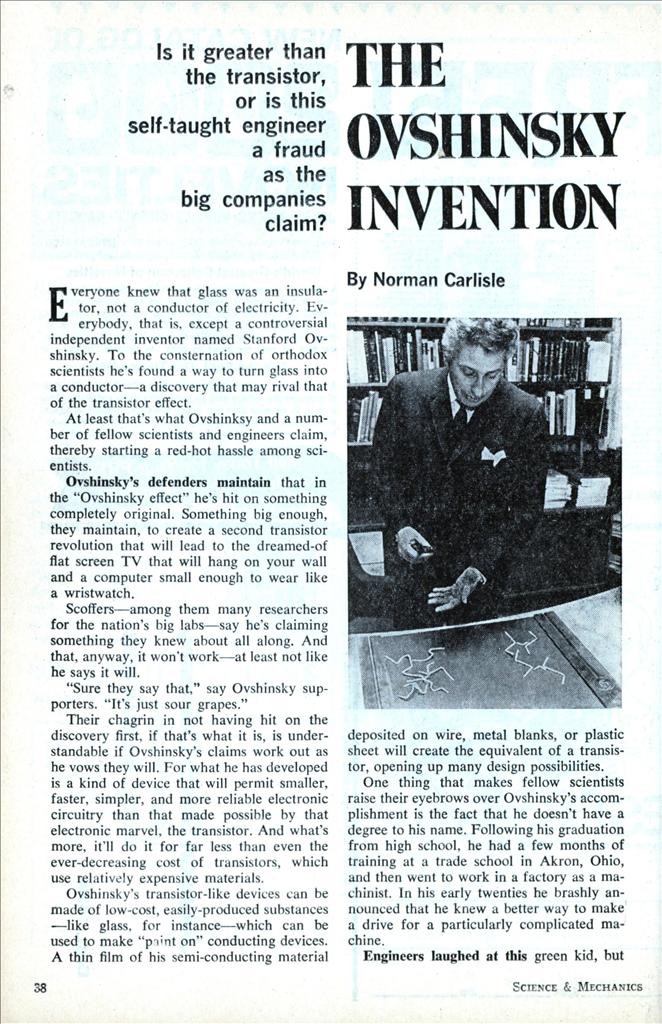 Is it greater than the transistor, or is this self-taught engineer a fraud as the big companies claim?

Everyone knew that glass was an insulator, not a conductor of electricity. Everybody, that is, except a controversial independent inventor named Stanford Ovshinsky. To the consternation of orthodox scientists he’s found a way to turn glass into a conductor—a discovery that may rival that of the transistor effect.

At least that’s what Ovshinksy and a number of fellow scientists and engineers claim, thereby starting a red-hot hassle among scientists.

Ovshinsky’s defenders maintain that in the “Ovshinsky effect” he’s hit on something completely original. Something big enough, they maintain, to create a second transistor revolution that will lead to the dreamed-of flat screen TV that will hang on your wall and a computer small enough to wear like a wristwatch.

Scoffers—among them many researchers for the nation’s big labs—say he’s claiming something they knew about all along. And that, anyway, it won’t work—at least not like he says it will.

Their chagrin in not having hit on the discovery first, if that’s what it is, is understandable if Ovshinsky’s claims work out as he vows they will. For what he has developed is a kind of device that will permit smaller, faster, simpler, and more reliable electronic circuitry than that made possible by that electronic marvel, the transistor. And what’s more, it’ll do it for far less than even the ever-decreasing cost of transistors, which use relatively expensive materials.

Ovshinsky’s transistor-like devices can be made of low-cost, easily-produced substances —like glass, for instance—which can be used to make “print on” conducting devices. A thin film of his semi-conducting material deposited on wire, metal blanks, or plastic sheet will create the equivalent of a transistor, opening up many design possibilities.

One thing that makes fellow scientists raise their eyebrows over Ovshinsky’s accomplishment is the fact that he doesn’t have a degree to his name. Following his graduation from high school, he had a few months of training at a trade school in Akron, Ohio, and then went to work in a factory as a machinist. In his early twenties he brashly announced that he knew a better way to make a drive for a particularly complicated machine.

Engineers laughed at this green kid, but they didn’t laugh long. He came up with a design involving electrical, hydraulic, and pneumatic servo-mechanisms that actually worked.

Before he was thirty, Ovshinsky was president of a big machine tool company. His machine became standard in the industry during the Korean war when it proved that it could turn out shell cases ten times faster than any other.

For all his success, Ovshinsky felt restless and confined inventing for other companies, even ones he had an interest in. He kicked over the traces to tackle the Big One, the idea that glass and related materials might be used in transistor-like devices. The problem facing him looked insurmountable. In the crystalline substances from which transistors are made, such as germanium and silicon, current is easily controlled because these materials are structured in neat lattices through which current can be made to flow predictably.

Materials like glass would never have anything like the transistor effect, most scientists were sure, because they are disorderly in structure, jumbled into helter-skelter arrangements. Surely, in such materials, electrons would be so isolated from each other that they could not join up to move in a steady stream, as required in transistors.

Ovshinsky had a bold idea about that. Maybe those disordered materials had a property nobody had really checked out. Perhaps there was some way to bring “short range order” into them. Suppose you shot an electric current of just the right voltage into them. Might it not change the material, per- mitting the electrons to join up and flow as a current?

After thousands of mathematical calculations and lab experiments, Ovshinsky emerged with the announcement that he had established the existence of the “Ovshinsky effect.” In layman’s terms it boils down to this: when you apply a certain voltage to a material of a given chemical composition, this material will be affected by this current and turned into a conductor.

The result is embodied in “Ovonic Switches,” for which the inventor has been granted patents. They are now being turned out by Ovshinsky’s company, Energy Conversion Devices, Inc., in Troy, Mich.

One type is the Ovonic Threshold Switch. It switches from blocking a current to conducting it in 150 trillionths of a second. The switch keeps conducting as long as the current through it exceeds a certain voltage. When the current drops below this voltage, the switch again blocks current rather than conducting it.

A second Ovshinsky invention is the Ovonic Memory Switch. It operates like the Threshold Switch, but it remains in the conducting condition even when the current is turned off. A pulse of electricity is required to convert it back to the blocking state. Ovshinsky sees it as being the “perfect” memory unit for computers. One of its main advantages is the fact that it’s blackout proof; it isn’t affected when the current goes off. Therefore a computer using Ovonic switches wouldn’t lose its memory in power failures, as many did in the big Northeastern U.S. blackout of ’65. (Continued on next page) All Ovshinsky switches have a property transistors lack. A transistor sends current in one direction only and therefore operates on D.C. or requires special adaption to operate on A.C. Ovonic switches operate on A.C., which makes them ideal for home use, Ovshinsky asserts. The inventor pictures small, cheap computer control units that will do the thinking for all kinds of household appliances—like, say, robot vacuum cleaners and lawnmowers.

Is Ovshinsky’s invention as big as many claim it is? Will Ovonic switches create, as Ovshinsky believes they will, a second transistor revolution? Will the scientific critics who say it really isn’t all that great be proved wrong?

Ovshinsky isn’t worried about the answers. His switches are being tried out in military hardware and a number of consumer products. Ovshinsky shrugs off the skeptics who doubt that they’ll really work.

“We’re going to prove that,” he says, with the confident smile that befits a man who’s sure he has invented something bigger than the transistor. •