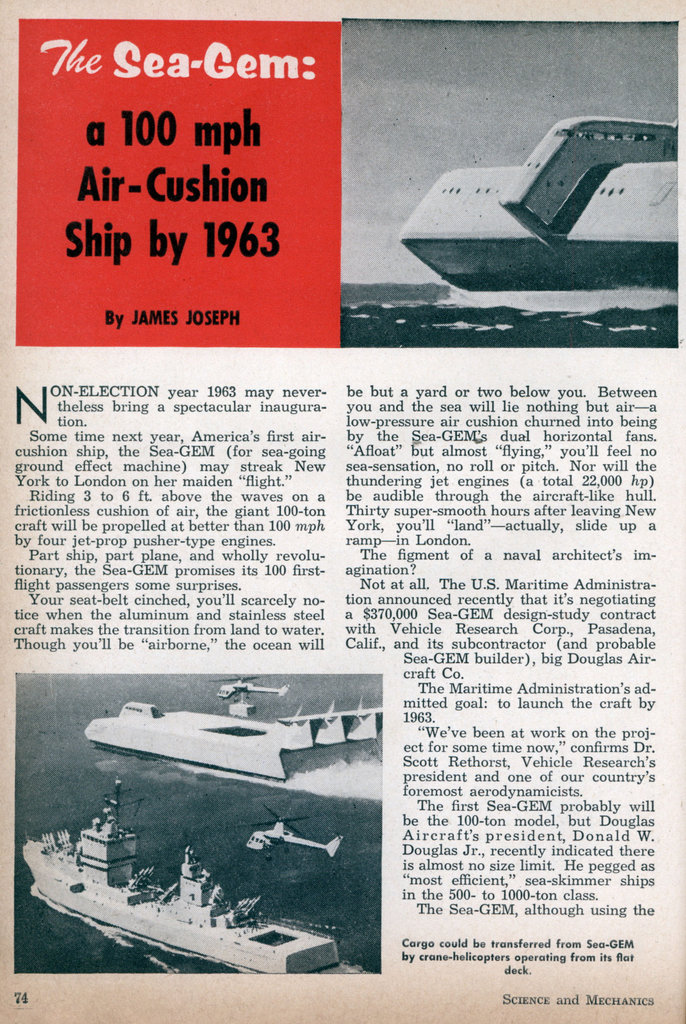 Some time next year, America’s first air-cushion ship, the Sea-GEM (for sea-going ground effect machine) may streak New York to London on her maiden “flight.”

Riding 3 to 6 ft. above the waves on a frictionless cushion of air, the giant 100-ton craft will be propelled at better than 100 mph by four jet-prop pusher-type engines.

Your seat-belt cinched, you’ll scarcely notice when the aluminum and stainless steel craft makes the transition from land to water. Though you’ll be “airborne,” the ocean will be but a yard or two below you. Between you and the sea will lie nothing but air—a low-pressure air cushion churned into being by the Sea-GEIV^ dual horizontal fans. “Afloat” but almost “flying,” you’ll feel no sea-sensation, no roll or pitch. Nor will the thundering jet engines (a total 22,000 hp) be audible through the aircraft-like hull. Thirty super-smooth hours after leaving New York, you’ll “land”—actually, slide up a ramp—in London.

The figment of a naval architect’s imagination?

Not at all. The U.S. Maritime Administration announced recently that it’s negotiating a $370,000 Sea-GEM design-study contract with Vehicle Research Corp., Pasadena, Calif., and its subcontractor (and probable Sea-GEM builder), big Douglas Aircraft Co.

The Maritime Administration’s admitted goal: to launch the craft by 1963.

“We’ve been at work on the project for some time now,” confirms Dr. Scott Rethorst, Vehicle Research’s president and one of our country’s foremost aerodynamicists.

The first Sea-GEM probably will be the 100-ton model, but Douglas Aircraft’s president, Donald W. Douglas Jr., recently indicated there is almost no size limit. He pegged as “most efficient,” sea-skimmer ships in the 500- to 1000-ton class.

In contrast to the Avro, the Sea-GEM will, at most, skim the water, its great weight supported by the cushion of air (only about 1/4 psi, or 36 lbs. per square foot). Douglas estimates that even a 500-ton craft would operate about half of the time at just 3 ft. or less above the surface—closer in calm seas; higher, and probably slower, when it’s rough.

For its main propulsion, the craft will depend on its four jet pusher engines. But propulsive power, even for the 500-ton ship envisioned by Douglas, won’t need to be anywhere near as big as for either jet planes or helicopters. Reason: The jet engines’ total power is translated into thrust; none of it (as in aircraft) is squandered on lift.

Artist’s drawings of the first 500-ton craft confirm Donald Douglas’s statement that “the craft’s configuration will tend toward a low, functional profile with essentially straight-line elements which permit the structure, although aircraft type, to be simple and low in cost.”

Although the Maritime Administration’s underwriting of the first Sea-GEM ostensibly aims at faster, more economical over-water transport, the Navy is also eyeing the craft as a multi-functioned amphibian: a land-to-water assault and supply ship.