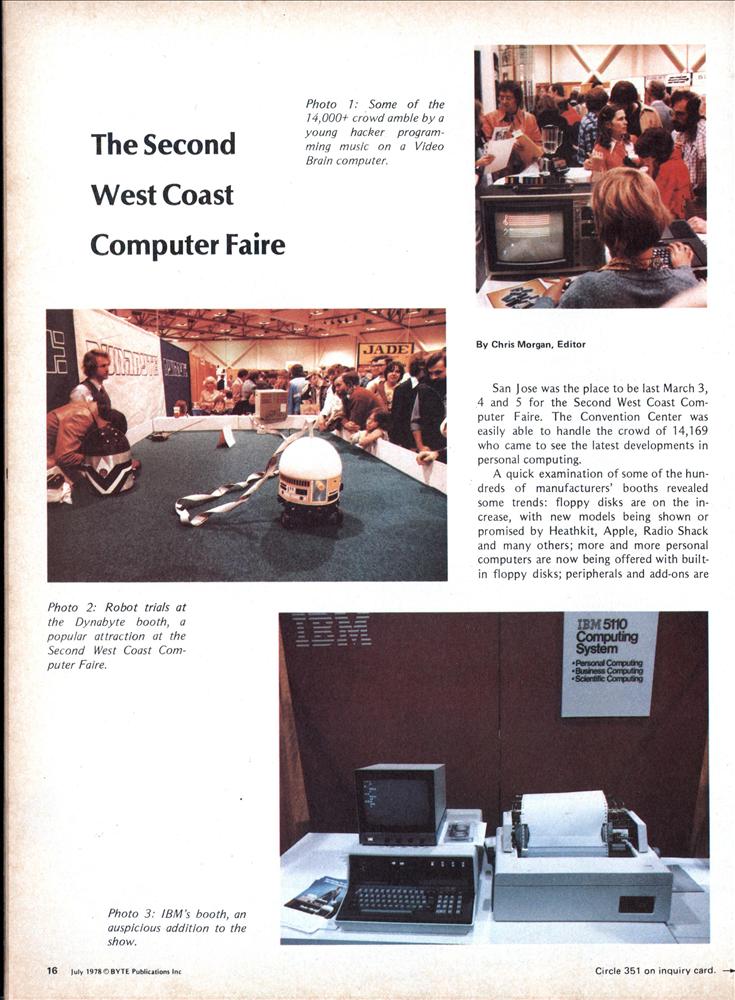 San Jose was the place to be last March 3, 4 and 5 for the Second West Coast Computer Faire. The Convention Center was easily able to handle the crowd of 14,169 who came to see the latest developments in personal computing.

A quick examination of some of the hundreds of manufacturers’ booths revealed some trends: floppy disks are on the increase, with new models being shown or promised by Heathkit, Apple, Radio Shack and many others; more and more personal computers are now being offered with built-in floppy disks; peripherals and add-ons are now available for a wide variety of computer buses.

I enjoyed the many special features of the show, particularly the excellent computer generated art on display in the lobby. The microcomputer chess tournament proved to be one of the hits of the show. Larry Wagner from Atari presided over the 3 day battle of the processors, taking time out to give me a guided tour of the tournament. The level of play was impressive, and the winning program, called SARGON, was a 16 K byte Z-80 assembler program written by a husband and wife team, Kathe and Dan Spracklen. It beat some highly touted com- petition. (A copy of the SARGON program is available for $15 postpaid from the Spracklens, 10832 Macouba PI, San Diego CA 92124.) I was impressed with the professional appearance of the show, which held its own with many of the established engineering and computing shows. The Third West Coast Computer Faire will be held this coming November 3, 4 and 5 in Los Angeles. Plan to see it if you can.”

Photo 1; Some of the 14,000+ crowd amble by a young hacker programming music on a Video Brain computer.

Photo 3: IBM’s booth, an auspicious addition to the show.

Photo 8: Students from Mills College Center for Contemporary Music in Oakland demonstrate- a digital and analog hybrid music synthesizer system, one of many special exhibits at the Faire.