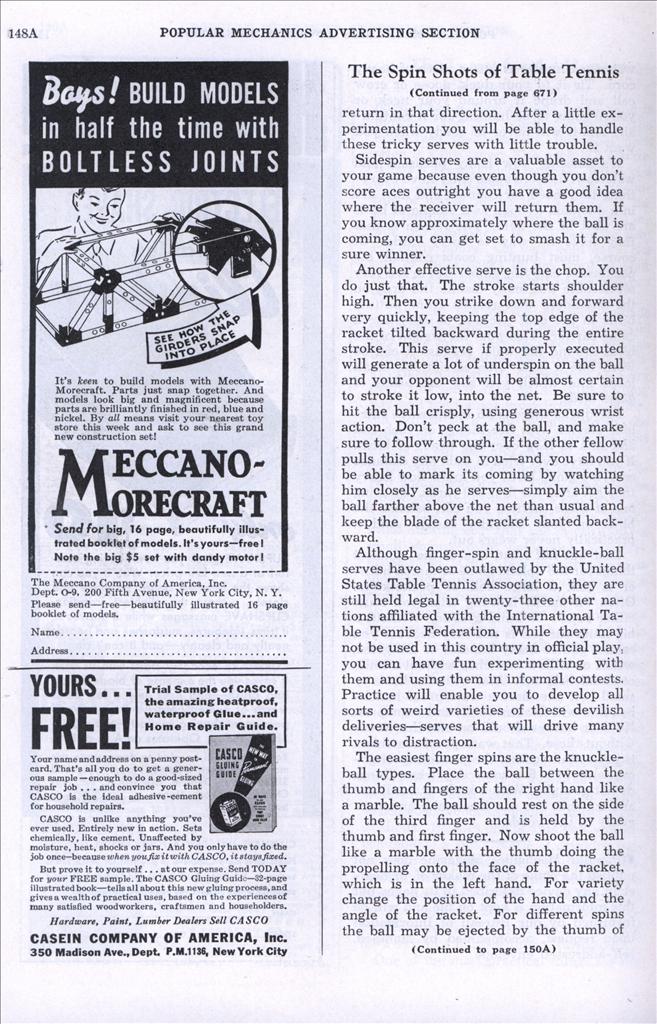 The SPIN SHOTS of TABLE TENNIS

Former National Champion OF ALL the games in which a ball is used, table tennis by all odds is the “spinniest.”

Willie Hoppe, the billiard wizard, puts plenty of “English” on the cue ball and Dizzy Dean flicks his wrist and manipulates his ringers as he whizzes the revolving ball through the air to get his “up-shoots,” “outs,” “ins” and “drops.” Every golfer knows one sort of spin makes his ball slice and a different one brings about a hook. Smart lawn tennis players consciously impart certain spins or twists to the ball to force their opponents into errors. Even top-notch bowlers get more strikes if they roll “hooks” by a simple twist of the wrist as the ball leaves their fingers.

In all these sports the ball revolves in the course of its flightâ€”sometimes fast, sometimes slow, to the left or to the right, up or down, as the case may be. The table tennis ball, however, does more weird, mysterious, rapid-fire revolving than any other ball used in sports. The reason is simple. It lies in the construction and materials of the present-day ball and racket. The little white sphere, made of sheet celluloid scarcely the thickness of a piece of paper, weighs only one-fourteenth of an ounce or 224 balls to the pound. The rackets, weighing between five and six ounces, have blades covered with a soft, pebbled-rubber cloth, which, upon close examination, reveals thousands of little pillar-like “nibs” which resemble goose flesh. When the zephyr-like, ball comes into contact with this sensitive surface you find it not only possible to put enormous English on the ball but quite hopeless to prevent imparting some sort of spin to it.

It is obvious, then, that even a dub can spin a table tennis ball, but it is something else to put the kind of spin on the ball that will fool the other fellow and enable you to return safely spin shots directed at you. All this may give you the impression that such shots are difficult to learn. Such is not the case. Many of them are very easy to master and it will surprise you how simply you can outwit your unsuspecting adversary and win point after point. Spin is part and parcel of the modern game and one of its greatest fascinations. Besides no one can become proficient without understanding the underlying principles.

Before telling you how to make spin and trick shots, I want to urge you to adopt the so-called “tennis” grip, the most natural and effective way to hold the racket. The winning shots and most of the trick shots are learned quicker and can be executed more effectively if this grip is used rather than the old-fashioned “penholder” method, still seen frequently among novice players. Also, use a racket surfaced with pebbled rubber which will give you better control and provide the means of imparting added English to the ball. Wooden and sandpaper rackets, of course, are still available.

We are now ready to deliver some fancy spin serves to make your receiver sit up and take notice. Let us first try the right-to-left sidespin service, so named because the stroke starts from the right side of the body and winds up on the left. Take a position a foot or two behind the table. The ball is held in the fingers of the left hand approximately waist high. The racket is held outstretched in the right hand and to the right side and the blade of the racket must be at right angles to the table. Now quickly draw racket and ball together, releasing the ball when the racket reaches the center of the body. As the hands cross one another in delivering the stroke the left should be in front of the right. Get plenty of zip into the shot and keep the blade of the racket upright through the entire sweep of the stroke. This serve will impart violent sidespin on the ball and unless the receiver realizes what you are doing the chances are he will return the ball clear off the table to your left side. This will score a point for you and should give you a kick if you enjoy outsmarting your opponent in any game.

The twin to this is the left-to-right sidespin serve. In this instance, deliver a backhand sidespin serve which starts on the left side and finishes on the right The ball is held in the fingers of the left hand well out in front of the body. The racket hand lies across the body with the racket about opposite the left hip. Draw the right arm quickly to the right and release the ball just as the racket crosses the middle of the body. This action will give you a powerful side-spin which your opponent most likely will return off the table, this time to your right side. Practice these two sidespin serves until you can put them on the table every time and at the same time put a lot of stuff on the ball. Then spring them on your friends and watch their faces.

But suppose your opponent springs these spinny sidespin serves on you. Are you going to be caught napping? Not if you follow this simple rule. Be sure to aim your opponent’s service to the side of the table from whence the serve started. In other words, push the ball back in the direction opposite to that which your adversary’s racket moved in slicing the ball. If it started from his left side, aim your return in that direction. After a little experimentation you will be able to handle these tricky serves with little trouble.

Sidespin serves are a valuable asset to your game because even though you don’t score aces outright you have a good idea where the receiver will return them. If you know approximately where the ball is coming, you can get set to smash it for a sure winner.

Another effective serve is the chop. You do just that. The stroke starts shoulder high. Then you strike down and forward very quickly, keeping the top edge of the racket tilted backward during the entire stroke. This serve if properly executed will generate a lot of underspin on the ball and your opponent will be almost certain to stroke it low, into the net. Be sure to hit the ball crisply, using generous wrist action. Don’t peck at the ball, and make sure to follow through. If the other fellow pulls this serve on youâ€”and you should be able to mark its coming by watching him closely as he servesâ€”simply aim the ball farther above the net than usual and keep the blade of the racket slanted backward.

Although finger-spin and knuckle-ball serves have been outlawed by the United States Table Tennis Association, they are still held legal in twenty-three other nations affiliated with the International Table Tennis Federation. While they may not be used in this country in official play, you can have fun experimenting with them and using them in informal contests. Practice will enable you to develop all sorts of weird varieties of these devilish deliveriesâ€”serves that will drive many rivals to distraction.

The easiest finger spins are the knuckle-ball types. Place the ball between the thumb and fingers of the right hand like a marble. The ball should rest on the side of the third finger and is held by the thumb and first finger. Now shoot the ball like a marble with the thumb doing the propelling onto the face of the racket, which is in the left hand. For variety change the position of the hand and the angle of the racket. For different spins the ball may be ejected by the thumb of the left hand onto the racket, clasped in the right.

Still another variation involves holding the ball between the pad of the thumb and the nail of the middle finger, which in this case ejects the ball. Or hold the ball between the pads of the thumb and third finger. Now snap these fingers and this will shoot the ball spinning into the air. As it comes down, bat it with the racket and the rapid spin on the ball will give the receiver something to worry about.

But there are other tricky spin shots besides serves that can be used to advantage during an actual contest. Here is a real fooler, a shot that can be employed when you are on the receiving end of a serve. Some call it “Old Faithful” because the ball shoots high and abruptly into the air and reminds them of that spout of water in Yellowstone park.

It is easier to execute this shot successfully when the serve is delivered to your right or forehand side. Hold the racket pointing forward and tilted slightly backward. As the ball is served toward you, advance the arm forward and contact the ball with an upward lift on the half-volley or directly after it has touched the table. You sort of scoop the ball. The upward movement will cause the ball to soar high in the air, and the forward impetus of the stroke will impart excessive underspin. Try to so strike the ball that it will land just over the net on your opponent’s half of the table. If you can do this the underspin should be strong enough to make the ball jump back to your side of the net without the receiver being able to even touch it with his racket. This will score a point for you even though your adversary finds it impossible to reach the ball. This return of service comes as a sensational surprise. It is not an easy shot to learn but if mastered it will give you no end of satisfaction. Of all the trick shots in table tennis, this shot probably is the most unusual and sensational.