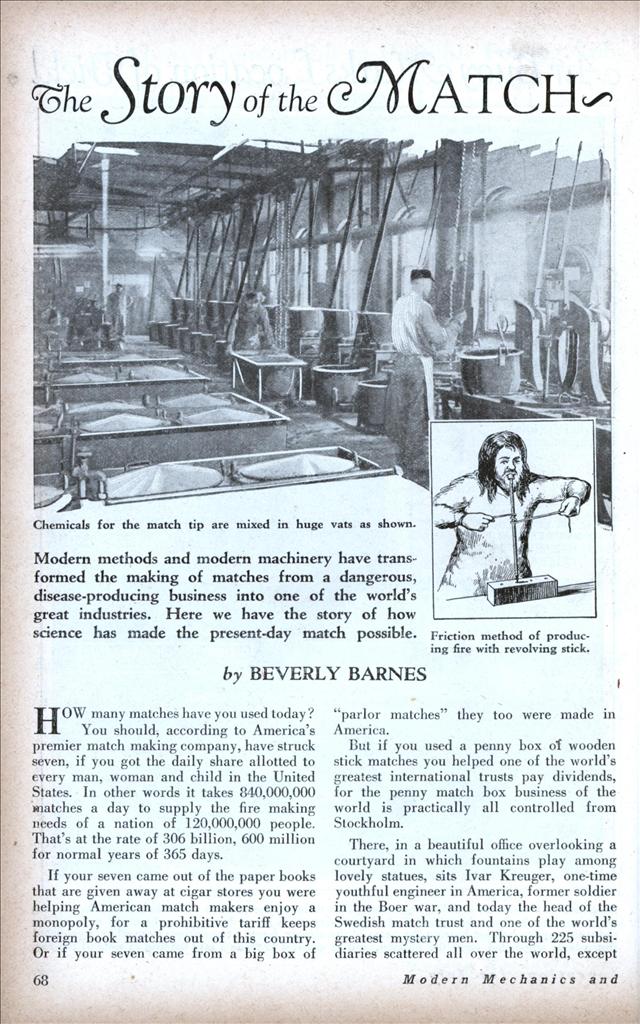 The Story of the Match ~ a Great World Industry

Modern methods and modern machinery have trans formed the making of matches from a dangerous, disease-producing business into one of the world’s great industries. Here we have the story of how science has made the present-day match possible.

HOW many matches have you used today? You should, according to America’s premier match making company, have struck seven, if you got the daily share allotted to every man, woman and child in the United States. In other words it takes 840,000,000 matches a day to supply the fire making needs of a nation of 120,000,000 people. That’s at the rate of 306 billion, 600 million for normal years of 365 days.

If your seven came out of the paper books that are given away at cigar stores you were helping American match makers enjoy a monopoly, for a prohibitive tariff keeps foreign book matches out of this country. Or if your seven came from a big box of “parlor matches” they too were made in America.

But if you used a penny box of wooden stick matches you helped one of the world’s greatest international trusts pay dividends, for the penny match box business of the world is practically all controlled from Stockholm.

There, in a beautiful office overlooking a courtyard in which fountains play among lovely statues, sits Ivar Kreuger, one-time youthful engineer in America, former soldier in the Boer war, and today the head of the Swedish match trust and one of the world’s greatest mystery men. Through 225 subsidiaries scattered all over the world, except in the United States, he makes* seventy-five per cent of the world’s matches, and out of the profits he buys match monopolies in many lands, and stabilizes national currencies by huge loans to governments. He goes and comes unannounced in the press, travels in private airplanes, maintains year around apartments in Paris, Berlin, London, New York and other cities, directs a world-wide organization that is rivaled in scope and size, among American companies, only by Standard Oil, and through it all remains one of the least known big business men in the world. In his middle forties, he is a bachelor, though his engagement to a Swedish countess has recently been reported.

And all this achievement has been built on an article that sells for a penny, a success story that makes the five and dime background of the Woolworth building seem tame in comparison. If a nation needs fifty or a hundred million dollars to tide it over an emergency Ivar Kreuger stands ready to lend the money—in exchange for a monopoly on that nation’s match business. Even the state-owned match factories of France have been unable to compete, and have been turned over to the Swedish Trust, in exchange for a loan.

The Swedish penny matches, made of cheap northern aspen, can be laid down in this country, after paying the duty, for less than half what it would cost to make similar matches over here out of fine white pine. Rather than compete in such an unprofitable market the Diamond Match company, America’s biggest manufacturer in the field, acts as agent and distributor for the Swedish matches, and thus shares in the profits, confining its own manufacture of small size matches to a slightly larger and superior size.

The fact that the bulk of the world’s fire-making business should center in Sweden is not an accident, for the Swedes have been active in match making almost from the beginning.

The first friction match was invented in 1827 by an Englishman, John Walker, who thought so little of his invention he decided it was too trivial to warrant patenting. He used sulphite of antimony, chlorate of potash, gum and starch for the match head, and to light one of his matches you had to draw it between the folds of a sheet of coarse sandpaper.

The next match was the phosphorus type, which continued with some modifications as late as 1911, when it was finally put out of existence by the development, by William Armstrong Fairburn, now president of the Diamond Match Company, of the modern match, which, unlike its predecessor, is not injurious to its makers nor a constant source fire risk.

Swedish ingenuity contributed the first development to match making in 1844 when G. E. Pasch excluded phosphorus from the match head and included it among the striking ingredients on the box—and that was the basis of the modern safety match, the kind that strikes only on the box. Two brothers, Johan Edward and Carl Franz Lundstrom, perfected the Pasch invention and started a small factory- that same year at Jonkoping—and those two names, Lundstrom and Jonkoping, have been associated with match making ever since. The brothers made an ideal combination, one a business executive and the other an inventor, chemist and engineer.

They were followed by Alexander Langerman, also of Jonkoping, who invented the first match making machine in 1872, and that original machine, by the way, is still in service.

A modern match making machine looks very much like a huge newspaper printing press. Blocks of wood, cut as thick as a match is long, are fed in at one end, and out of the other comes matches packed in boxes. Dies stamp the match splints out of the blocks and stick the splints in holes in iron plates, which are attached to a moving, endless belt. One machine will produce 900,000 splints an hour. As the belt moves along the splints are dipped in a chemical bath that prevents afterglow when the match goes out, in paraffin to insure that they will burn freely, in the “bulb” compound, and finally in the chemical which produces the friction tip.

Before the day of the modern machine and the modern non- poisonous match, hundreds of workers died from a terrible disease in which phosphorus ate away the bones of the jaw. In those days splints were cut twice as long as a match, then rolled into a huge cart wheel by feeding them between two strips of belting which were being wound around an axle. When the roll reached a diameter of two feet or more it was removed, each side dipped by hand in the chemical baths, and then unrolled, after which the double-ended, double-length match was cut in half in the center and .boxed by hand.

The romance of fire making dates back to the dawn of earliest recorded history. Six thousand years ago the Egyptians were using both flints and the fire bow, in which the vertical friction rod was rotated by a bow, with the bow string wound once around the rod.

The most interesting of all primitive fire making apparatus, however, is the piston and cylinder developed in the East Indies and India. No one knows how many centuries old it is, but it is the lineal forefather of the modern Diesel engine, employing the heat of compression to provide ignition. A bamboo cylinder a couple of inches long was fitted with a piston rod, wrapped with silk thread for a piston ring. A bit of dried fungus is placed in the end of the piston, which is then inserted a short distance in the cylinder. Holding the cylinder in one hand, the native strikes the outer end of the piston a tremendous blow with the palm of the other hand, forcing it down the tube so fast that the heat of compression fires the tinder. The piston is instantly withdrawn, the smoldering fire blown to a flame, and transferred to the hearth.