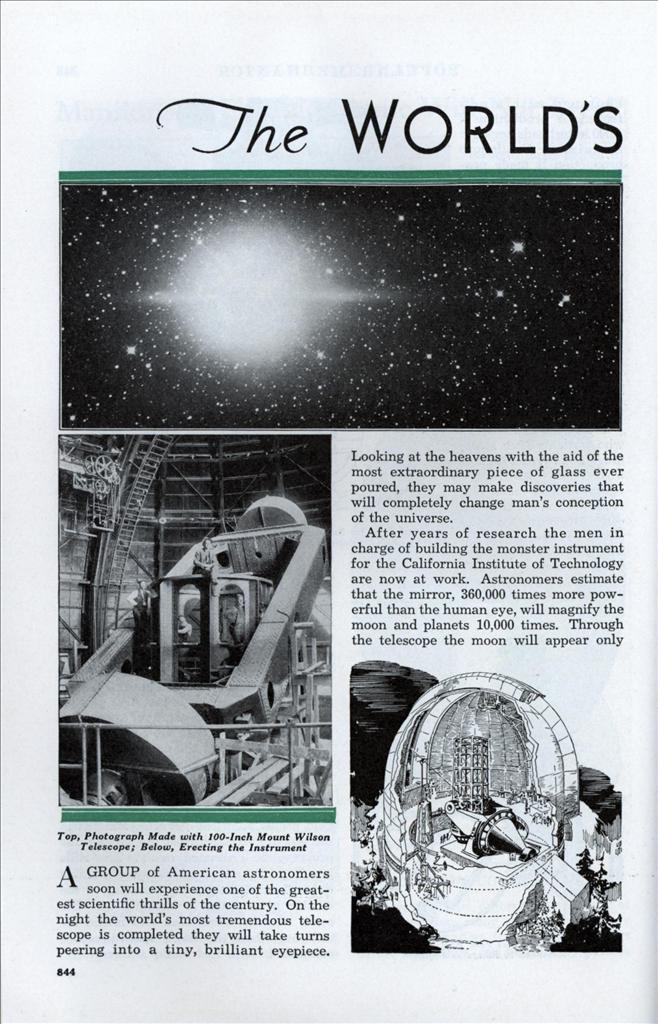 A GROUP of American astronomers soon will experience one of the greatest scientific thrills of the century. On the night the world’s most tremendous telescope is completed they will take turns peering into a tiny, brilliant eyepiece.

Looking at the heavens with the aid of the most extraordinary piece of glass ever poured, they may make discoveries that will completely change man’s conception of the universe.

After years of research the men in charge of building the monster instrument for the California Institute of Technology are now at work. Astronomers estimate that the mirror, 360,000 times more powerful than the human eye, will magnify the moon and planets 10,000 times. Through the telescope the moon will appear only twenty-five miles away, at which distance large buildings could be easily seen. The 100-inch telescope on Mount Wilson, only half the diameter of the newest instrument, can detect a candle flame 5,000 miles away. With the aid of this telescope approximately 2,000,000 nebulae, each as crowded as the Milky Way, have been found. It can peer into space a distance of 400,000,000 light years.

The new telescope, astronomers hope, will penetrate at least three times farther into space, thus opening an unexplored sphere thirty times the size of that now sounded. Already tasks that appeared insurmountable have been overcome in constructing the curved mirror that has 240 square feet of surface and is to be smoothed to an accuracy of two one-millionths of an inch.

Under the guidance of Dr. George Ellery Hale, who built the 100-inch telescope, leaders in many branches of science are co-operating with the International Education Board of New York which provided the $6,000,-000 telescope fund. Drs. J. A. Anderson and Francis G. Pease of the Mount Wilson observatory are in charge of the work.

Instead of gathering light by lenses, all large astronomical telescopes use a curved mirror to gather the light from a star and focus it at one point inside the barrel of the telescope. There a prism diverts the light to a point outside the barrel, or a flat mirror returns the gathered light will be able to sit inside the tube, directly in the path of the incoming light, for in spite of the shadow the observer will cast on the mirror, less light will be lost than if the rays were shunted outside.

The most crucial part of the project—that of making the giant reflector—is now well under way. The problem was to find a material that could be ground to the necessary accuracy and that would remain unaffected by atmospheric changes. Glass and fused quartz were tried but a super pyrex borosilicate glass finally was selected after a trial mirror 120 inches in diameter, the largest ever made, was poured, allowed to cool and examined. The giant 200-inch disk of this substance was poured recently. Instead of a deep disk, the mirror is comparatively thin, with an intricate system of ribs and webs on the back to give the surface strength and to provide grips for the metal backing. Even in this thin form, the completed mirror will weigh nearly twenty tons. Months will be required for the mirror to cool, after which it will be ground and polished. In the final stages polishers will work less than an hour a day. Otherwise the heat from their bodies might affect the curve on the surface.

Instead of silver, the new mirror will be coated with aluminum. Inside a huge vacuum chamber individual atoms of aluminum will be deposited on the glass surface, giving it a reflective power greater than that of silver and one that is especially sensitive to weak ultraviolet rays. Meanwhile, a vast amount of auxiliary instruments like thermocouples, spectroscopes, and photoelectric cells are being built. Among other unique devices is a solar furnace consisting of mirrors and burning glasses with which astronomers hope to focus the sun’s rays and obtain a heat approximating the 6,000 degrees centigrade temperature of the sun’s surface.

The ponderous fork-type mounting from which the telescope barrel will swing is also being designed. Huge motors and cylinders of compressed air will move the whole base under the control of an astronomical clock so that after the instrument has been pointed at a star, it will automatically follow the object as the earth turns. A change in temperature of only a few degrees would influence the “figure” of the mirror, throwing its focal point out, so the huge dome is to be double-walled to prevent the entrance of heat during the daytime. The mirror will remain covered and protected when not in use, and water circulating around its mounting will keep the mass at the same temperature as the outside air when the shutters of the dome are rolled back. The mirror will never be used to observe the sun, for the hot rays might permanently disfigure its surface.

Contrary to accepted notions, the telescope will rarely be used for visual observations of the stars. Photographic plates are infinitely more sensitive to light than the human eye. By means of time exposures astronomers can obtain pictures of stars so faint the eye would never detect them. In the future astronomers will make their greatest discoveries in the photographic dark room.

Instead of trying to make the telescope increase the size of star images, astronomers hope that it will condense them to the tiniest pin-points of light. No telescope powerful enough to show the shape of a star can be built and the goal of the telescope builders is to achieve an instrument in which even microscopic vibration is absent.

Nearly as important as the mirror itself is the site at which the telescope is to be erected. A place where the stars twinkle less is sought. Twinkling is caused by unequal densities in the air, giving a fuzzy appearance to star photographs. The choice now has narrowed down to one of four mountain tops.