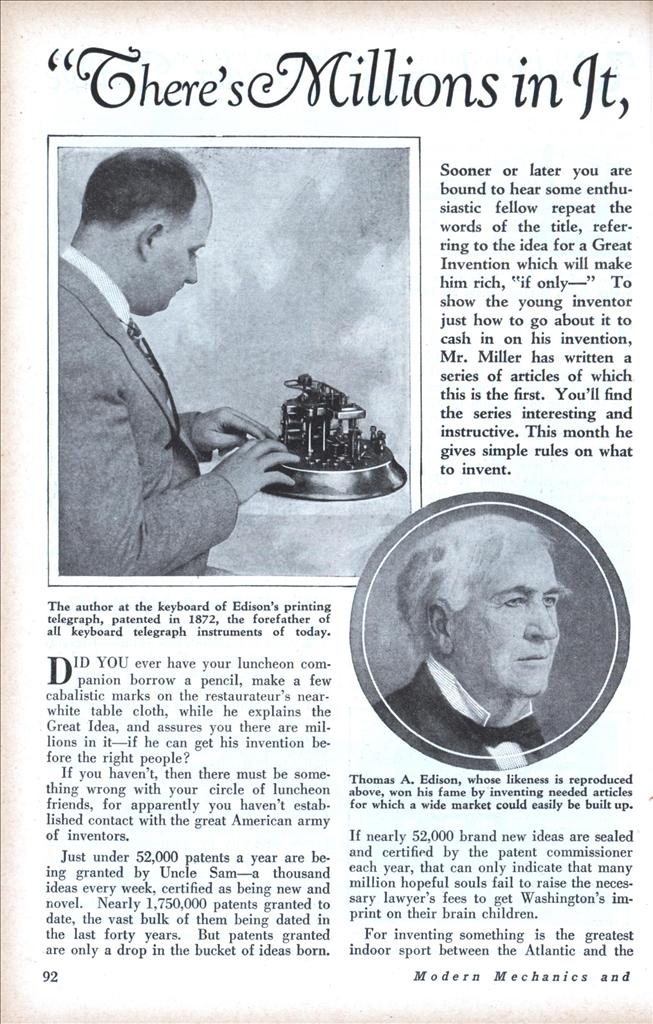 Sooner or later you are bound to hear some enthusiastic fellow repeat the words of the title, referring to the idea for a Great Invention which will make him rich, “if only—” To show the young inventor just how to go about it to cash in on his invention, Mr. Miller has written a series of articles of which this is the first. You’ll find the series interesting and instructive. This month he gives simple rules on what to invent.

DID YOU ever have your luncheon companion borrow a pencil, make a few cabalistic marks on the restaurateur’s near-white table cloth, while he explains the Great Idea, and assures you there are millions in it—if he can get his invention before the right people?

If you haven’t, then there must be something wrong with your circle of luncheon friends, for apparently you haven’t established contact with the great American army of inventors.

Just under 52,000 patents a year are being granted by Uncle Sam—a thousand ideas every week, certified as being new and novel. Nearly 1,750,000 patents granted to date, the vast bulk of them being dated in the last forty years. But patents granted are only a drop in the bucket of ideas born.

If nearly 52,000 brand new ideas are sealed and certified by the patent commissioner each year, that can only indicate that many million hopeful souls fail to raise the necessary lawyer’s fees to get Washington’s imprint on their brain children.

For inventing something is the greatest indoor sport between the Atlantic and the Pacific, the Great Lakes and the Rio Grande. It undoubtedly has more devotees than cross-word puzzles and ask-me-another games combined. And it is one of the most wasteful sports ever conceived, for out of the vast army of would-be inventors at least ninety percent, and some would say ninety-nine, are working on the wrong track.

The investment in the appurtenances of invention, tools, models, etc., not to mention patent and attorney’s fees, is probably greater than the expenditure on any other form of sport. I know an airplane inventor who recently spent $2,200 on one small model of a revolutionary propeller, and junked it as soon as it was finished for another model costing only a fraction of that sum. Even if all the models built averaged but a few dollars each, when that sum is multiplied by the millions of potential inventors the result is a grand and staggering sum.

And once a patent is issued, the task has only begun, the hardest work remains. That’s the job of marketing the invention, and it is particularly hard because the average inventor is not a business man, and doesn’t know how to proceed. Even the fact that a patent is issued proves nothing, for the government does not guarantee that an idea is either practical or useful—only that it is new and novel. Out of nearly a thousand ideas patented each week perhaps three-fourths should never have reached that far. Of the other 250, perhaps 245 will appear on the market, battle an unresponsive public, and retire more or less gracefully, while sadder but wiser men pocket the loss. That leaves five, and maybe four will have a fair measure of success, and the fifth may be a real money maker, with millions in it, for the right people.

It isn’t the thousands of unsuccessful inventions that are patented each year, however, that represent the real economic loss. The tragedy lies in the hundreds of thousands of ideas that are stored away to gather dust on some closet shelf, never to get their chance to meet the buying public face to face. It is a tragedy, for among them the simplest law of averages proves there must be many that would have found a place in the world and gathered fame and fortune for their fathers.

Some place between the birth of an idea and its growth to full stature several million inventors are dropping by the wayside. Their models are stored away in the attic, to be resurrected by some future generation that will smile and wonder what harebrained idea grandpa was fooling with when he perpetrated this one.

Rules for Inventors It is to point out the errors that lead to this great economic loss that this series of articles is being written. There are certain simple rules of what to invent, how to invent it, and what to do with it after it is invented, that may help prospective inventors over the hard places in the road.

And the first of all rules is that a successful invention must fill a real need. If we had had some other form of transportation as cheap and fast as the automobile there would have been no field for automobiles. It was because the gasoline buggy was so far superior to the horse-drawn vehicle as a time and labor saver that Henry Ford today possesses one of the world’s largest fortunes.

Consider the case of William Garfield Kendall, of Newark, N. J. There is hardly a woman or girl in the land that isn’t contributing a few pennies every year to Kendall, who holds something like eighty patents on vanity cases, compacts, talcum powders, and similar articles. Kendall and a partner started business life making novelty jewelry in a small factory. They discovered a need for a practical form of solid cake powder—a compact, the ladies call it. The French were marketing a cake powder, but it was held together by gum acacia and baking, and was not satisfactory. Kendall experimented until he developed a cake composed of pure talc and distilled water.

Then he had to develop a metal plate to hold the cake, a vanity case with a means of attaching the plate, and then he invented a metal mirror for the case. Thus one invention led to another. A doctor friend suggested that ordinary sifter-top talcum cans should have self-closing tops, to keep the contents clean. Kendall proceeded to invent one, and sold the patent for $25,000.

And his best advice for inventors brings up the second rule, for Kendall says, “An inventor usually does the best work in the field he knows best.”

That ought to be self evident—yet when a submarine was rammed and sunk a few years ago more than 5,000 people who never saw a submarine and knew nothing about their workings submitted rescue inventions to the navy department. Needless to say, none of the 5,000 proved practical.

In the last half dozen years I have examined hundreds of ideas for airplanes and lighter-than-air ships, ideas conceived by people who never flew a ship—some of whom had never seen an airship outside of magazine pictures. Needless to say, there wasn’t one that was practical. One inven- tor’s idea was a pendulum, with a heavily weighted end, hung in the cockpit, with controls connected, the theory being that if the plane dipped a wing, or started to dive or climb, the displacement of the pendulum would operate the controls and restore normal flight. A pretty theory, but unfortunately the inventor didn’t know about centrifugal force; didn’t know, for example, that you can place a glass of water on the floor of a plane and loop the loop without spilling a drop.

These are some of the reasons why practically every successful inventor advises prospective inventors to stick to the fields they know best. The street car motorman may invent a new electric control, or a new car door opener, and the office worker a new gadget for the desk, but each would be lost in the other’s field.