THESE SIMPLE HINTS WILL HELP YOU LEARN SURFBOARD RIDING (Jul, 1937)

How would you get a 21 foot long, 165 pound surfboard to the beach? 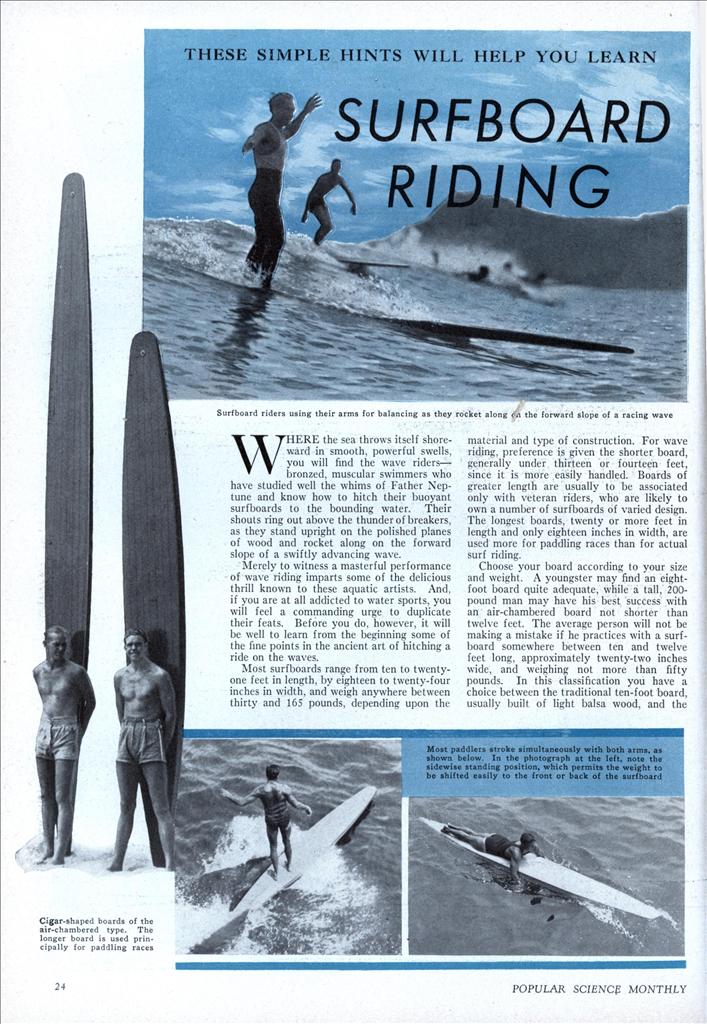 THESE SIMPLE HINTS WILL HELP YOU LEARN SURFBOARD RIDING

WHERE the sea throws itself shoreward in smooth, powerful swells, you will find the wave riders— bronzed, muscular swimmers who have studied well the whims of Father Neptune and know how to hitch their buoyant surfboards to the bounding water. Their shouts ring out above the thunder of breakers, as they stand upright on the polished planes of wood and rocket along on the forward slope of a swiftly advancing wave.

Merely to witness a masterful performance of wave riding imparts some of the delicious thrill known to these aquatic artists. And, if you are at all addicted to water sports, you will feel a commanding urge to duplicate their feats. Before you do, however, it will be well to learn from the beginning some of the fine points in the ancient art of hitching a ride on the waves.

Most surfboards range from ten to twenty-one feet in length, by eighteen to twenty-four inches in width, and weigh anywhere between thirty and 165 pounds, depending upon the material and type of construction. For wave riding, preference is given the shorter board, generally under thirteen or fourteen feet, since it is more easily handled. Boards of greater length are usually to be associated only with veteran riders, who are likely to own a number of surfboards of varied design. The longest boards, twenty or more feet in length and only eighteen inches in width, are used more for paddling races than for actual surf riding.

Choose your board according to your size and weight. A youngster may find an eight-foot board quite adequate, while a tall, 200-pound man may have his best success with an air-chambered board not shorter than twelve feet. The average person will not be making a mistake if he practices with a surfboard somewhere between ten and twelve feet long, approximately twenty-two inches wide, and weighing not more than fifty pounds. In this classification you have a choice between the traditional ten-foot board, usually built of light balsa wood, and the more modern cigar-shaped hoard, which contains an air chamber throughout its entire length Once you have selected a good surfboard, it is advisable that you first become a competent paddler. Prone upon your stomach, balance your weight on the board so that the deck is almost level with the water. A choppy surface will require a slight uptilt to the bow. Now, arch your back and raise your shoulders with face forward, and start to stroke with extended arms, as though they were the oars of a boat. Most paddlers, especially beginners, prefer to stroke simultaneously with both arms, although an alternating, over-arm stroke, similar to that used in swimming the crawl, also can be employed. It is interesting diversion, too, to paddle Indian-style on the knees,, or in a sitting position.

But whatever the method, the stroke is made with the wrist and arm tensed, and fingers cupped together. Relax as the arm is being carried forward. On the hollow racing boards, practiced paddlers can sprint at approximately twice the speed of champion swimmers. Distance also is possible on the paddle board. Beach guards of Santa Monica, Calif., recently paddled from the mainland to Santa Catalina Island, a distance of more than twenty-six miles, in less than six hours. The paddle board also suggests adventure on lakes and broad rivers. When resting, merely sit upright on the board, astraddle near the point of balance.

When paddling, you have two methods of guiding your thin craft. To negotiate a slight curve, it is necessary only to vary the power of your strokes, or to dip one hand shallowly as you increase the force of the other. But in order to turn sharply, it may be advisable to drag one foot as well.

Most buoyant boards will carry two persons on a favorable surface, and you and a companion may paddle tandem fashion, timing your strokes rhythmically like members of a rowing crew. The more experienced person should ride behind and act. as steersman.

The paddle board can be used to advantage in accomplishing a water rescue, particularly where a swimmer has become tired and is unable to return to shore without assistance. Should the subject be helpless, it is recommended that you sit astraddle the board when attempting to drag his weight into an advantageous position.

The beginner should exercise caution when taking a surfboard through the breakers. Always keep the bow headed squarely into the incoming waves, and time your progress so that the curling water will not crash down upon you. You may buck through breakers that are largely spent, but watch out for those which still have a forceful rumble. Where waves are breaking is the real danger zone. When attempting to pass a breaker at “this point, it generally is advisable to slip from your board and, holding it firmly by the stern, drive it deeply into *the rolling water, ducking as the crest of the wave sweeps over you. Should you happen to lose hold of your craft, remain submerged until the breaker has passed, and even then come up with your arms above your head. Strong men have been knocked unconscious when struck by a runaway surfboard. Now that you have become familiar with the buoyant surfboard, you must learn to judge waves. Except when swells are uncommonly high and steep, the best point to catch a wave is just outside the area where local breaks begin. Where there are shoals you will find the first crests of white water. Heavy ground swells generally run in series, and most riders prefer to let the first one or two go by, since the later waves usually are smoother and better for riding. It is the habit of these largest waves first to break locally, and the white crests will gain breadth in accordance with the shallowing water. It is on this smooth “shoulder” beside the foam that surfboards slide to the greatest advantage.

In hitching to a wave, it is important that you keep your board at right angles to the advancing slope of water. Keep well back on your water sled, so that the bow will ride fairly high, particularly if the wave is steep. Try to paddle at approximately the speed of the swell. As the stern lifts, throw your weight slightly forward in order to gain a final impetus for the slide. If all is well, you now will start to glide down the slope of water, just as a toboggan speeds down an icy hillside.

Once under way at a pace that drives wind and spray whistling by your ears, your first maneuver is to “slide,” or angle to one side, away from the break of the wave. This may be accomplished simply by shifting your weight and, if the board fails to respond instantly, using a foot as a rudder. Failure to come into a slide sometimes causes a board to dive, especially on steep waves. On this initial ride you probably will be content to maintain a prone position, but continued practice will eventually find you standing on the speeding plane.

Many riders come to their feet in a single movement, holding the board steady with their hands. The beginner, however, probably will feel more secure if he first draws his knees beneath him. An erect wave rider generally has one foot slightly in advance of the other, in some cases standing almost sidewise to the direction of travel. Like a tight-wire artist, you may have to use your arms vigorously in balancing.

GUIDE your sensitive craft by shifting your weight from side to side. If the bow appears to be dropping, take a short step backward to alter your balance slightly. Conversely, a step or jump forward will tend to lower the bow and send you farther down the slope of the wave. A zigzag course can be maintained by careful steering. Expert wave riders have been known to dart in and out among the mussel-crusted pilings of a pier while standing erect and steering solely by balance.

At length, you approach shallowing water and the point where all waves must break. To prevent any mishap in the breakers you will “cut out.” Step well back on your board and, as the bow lifts, lean sharply to one side. This will allow the wave to pass on beneath you. Once you have escaped a wave, however, be quick to paddle seaward again, lest you be mauled by the following breaker.

Sometimes a rider is able to survive the break and continue his ride clear to the glistening sand, but no matter how experienced he may be, there always is considerable danger when passing the break. Short rides can be had on waves that already have broken. In fact, this elementary form of surf riding has a considerable following, especially among younger swimmers and persons with small, improvised boards. In catching a half-spent breaker, keep well back on your board and paddle strongly as the water rolls against you. Sometimes you may be carried to the beach.

On the greater swells before the break, tandem riding is gaining popularity. The additional weight makes a wave more difficult to catch, and a steeper slope is preferable. The steersman, who rides behind, first rises to his feet, and then assists his companion to an upright position very close to him. A sturdy rider sometimes is able to hold a passenger on his shoulders.

Those who have years of wave-riding behind them are able to perform sensational feats on the speeding surfboard. It is not unusual to see a man balancing on his head and hands while the craft is in full swing. Others are able to ride backward, turning around by a single quick movement. Two persons riding parallel may change boards in midflight. Such trick riding requires a smooth, clean wave.

Another stunt that catches the eye of the visitor is free-board aquaplaning. As practiced on the hollow board, the rope attached to the power boat is held in the hands of the rider, who maintains his position on the board solely by the friction of his feet on the smooth surface. Sharp turns with the free board are deadly, but in case of a spill you still will have your craft near at hand for support, even though the boat speeds on.

IN “BODY SURFING”—riding waves without a board—the technique varies from that practiced on the surfboards. Although very steep swells may be taken in this manner, most body surfers elect to catch a wave just as it is breaking and then travel with their heads and shoulders just ahead of the “suds.” Where the breakers are not strong, you may find it a help to kick the feet while under way, or to bend one or both legs at the knees.

Some “body surfers” prefer to extend their arms forward, but you will note that under most circumstances the most proficient performers will keep their arms close to their sides. This position allows the chest, which is the body’s region of greatest buoyancy, to be as far as possible in advance of the rolling water.

And now, as we rest upon our surfboards, awaiting a green swell which moves silently toward us, let us hail the cradle of the wave rider — Hawaii. May we salute, also, that ancient island conquerer, King Kamehameha I. Legend tells us that, even when old in years, he was a skillful wave rider. But surely no man is old who can hitch his surfboard to the untamed waves. To him, and to those other sunny-souled people of the islands, let us be grateful for at least one secret of prolonging youth.