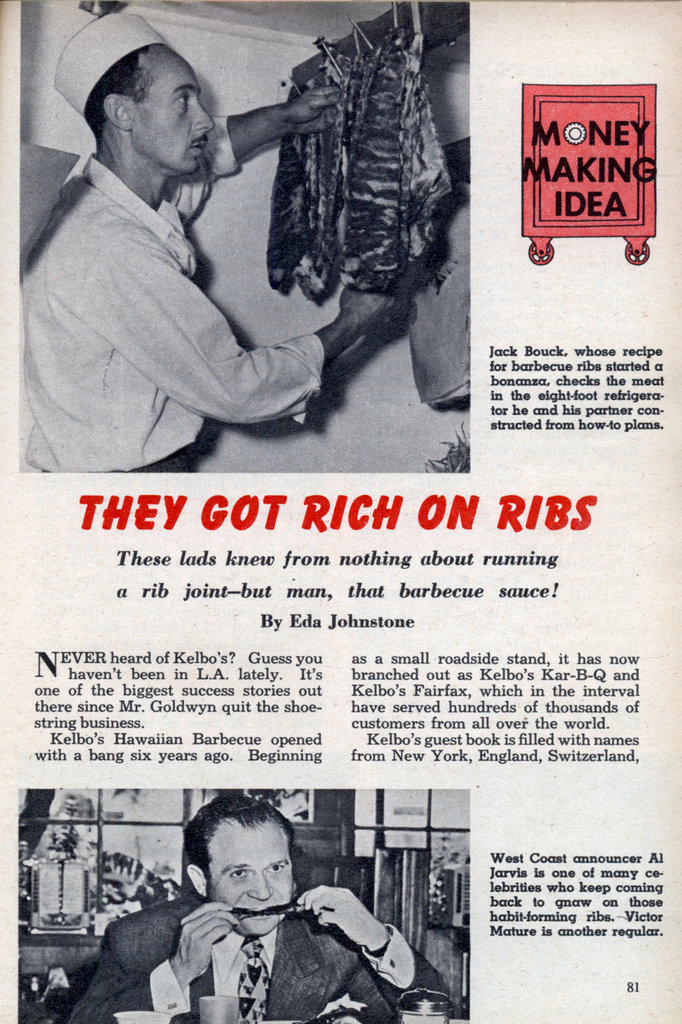 They Got Rich on Ribs

These lads knew from nothing about running a rib joint—but man, that barbecue sauce!

NEVER heard of Kelbos? Guess you haven’t been in L.A. lately. It’s one of the biggest success stories out there since Mr. Goldwyn quit the shoestring business.

Kelbo’s Hawaiian Barbecue opened with a bang six years ago. Beginning as a small roadside stand, it has now branched out as Kelbo’s Kar-B-Q and Kelbo’s Fairfax, which in the interval have served hundreds of thousands of customers from all over the world.

Kelbo’s guest book is filled with names from New York, England, Switzerland, Shanghai, Alaska and Honolulu. Lord Denbigh, an English milord, wrote “Jolly place.” A New Jersey patron wrote, “I traveled 3,000 miles to get a good meal.” The late Susan Peters was a regular customer and the only one to receive car service before the Kar-B-Q was built. Other movie stars are regular patrons. Nowadays when a West Los Angeles businessman wants to take a client to lunch, he takes him to Kelbo’s.

All this developed because Jack Bouck, an ex-musician working in a shipyard, knew the secret of barbecued ribs and roasts. Neither he nor his partner Tom Kelley knew beans about running a beanery. Jack and Tom went blindly into a business venture with only a recipe and ran head-on into success.

As a youngster, Jack joined a professional band engaged by the Dollar Steamship line. In restaurants in Hong Kong, Shanghai, Manila and Honolulu Jack was impressed by the quality of the barbecued ribs and roasts. On his free time he visited the kitchens and made friends with the Chinese chefs. There he learned the secret of barbecued ribs, roasts and sauces.

In World War II, after a hitch in the Marines, Jack got a job at the San Pedro shipyards where he met Tom Kelley.

In a shipyard you get sick of sandwiches. While Jack and Tom were griping one day Jack said, “You and your wife come over to the apartment and I’ll cook you the best barbecued dinner you ever ate.”

“To make a long story short,” Tom rentes, “when I finished the barbecued ribs, yams, and pineapple, they had to walk me around the block four times!”

They pooled their savings—$250 each. They spent their time off searching for a suitable location. The corner at Exposition, Gateway and Pico boulevards in West Los Angeles looked good.

They bought an old Army barrack for $155. Two hours daily, before going to the shipyard, they worked dismantling it, hauling the material to their site. They decided to begin with the refrigerator. They studied books and how-to articles in magazines and squared that away.

The barbecue pit was next on the program. They found that an old brick building at the Veterans Hospital in Sawtelle, two miles away, was being razed. They bought one wall for eight dollars, knocked it down, cleaned the brick, and hauled it away themselves. When the novice bricklayers had finished the pit their nest egg was exhausted. To earn more money they contracted for Sunday work installing safes in markets and other businesses. When they had established another small fund they went on with their building.

“It was a wonder,” Jack said, “that the neighborhood didn’t circulate a pe- tition against us, we were so long finishing the thing.”

Opening night was 18 months after starting the project. For months a sign in front had proclaimed, “Kelbo’s Hawaiian Barbecue Opening Soon—It Says Here.” By that time they were really broke. They had to borrow $50 for cash register change. And having gone into it so far, they hired an Hawaiian string orchestra to play outside.

A huge spotlight shuttled across the sky. Opening hour was to be at eight p.m. Late in the afternoon all was in readiness—gallons of salad, the pit filled with meat and yams.

When Jack returned at seven o’clock he was astonished to see lines of people. Cars were double parked; police directed traffic. When the doors opened the crowds jammed the place. Orders started piling up when they discovered that coffee had not been made. The French Fry cutter broke down and the potatoes had to be cut by hand. They worked so hard and fast that they never did hear the music outside. Periodically they bolted into the refrigerator to cool off. And they just stared at each other, bug-eyed. They had cut fingers, burned hands and arms, and still the crowds came. Some of the customers stood in line from eight o’clock until eleven.- The boys had to close the place at one a. m. because their food ran out.

When the last customer had left, Tom and Jack dropped exhausted onto a bench, “Where did they all come from?” gasped Tom.

Jack explained that one man had been watching the building go up for a year and a half. Others had smelled the ribs barbecuing all day.

It was many months before the boys had more than four or five hours sleep each night. They did their own dishwashing, and after the last patron* left at 1:30 in the morning, preparations were made for the following day—ribs and roasts into the barbecue, salad to make, pineapple to slice, working until five a. m., then back again to open up at eleven for lunch. In the first year of operation they grossed a quarter of a million dollars!

In 15 months they had 13 employees, serving 2,300 customers each week, added the Kar-B-Q, enlarged the pit and built the Fairfax place opposite Gilmore Stadium. And the feverish pace of that opening night has never let up. Once they opened their doors, success hit the boys like a tidal wave. Neither is complaining—not seriously, anyway. For anyone who wants to copy them they have some advice. First, find your magic recipe. Second, learn something about business management. If they’d done that, the boys say, they’d have saved the first two or three fortunes they made in ribs. As the first tip is the toughie, maybe you’d better learn about management first—you can always use this basic knowledge.