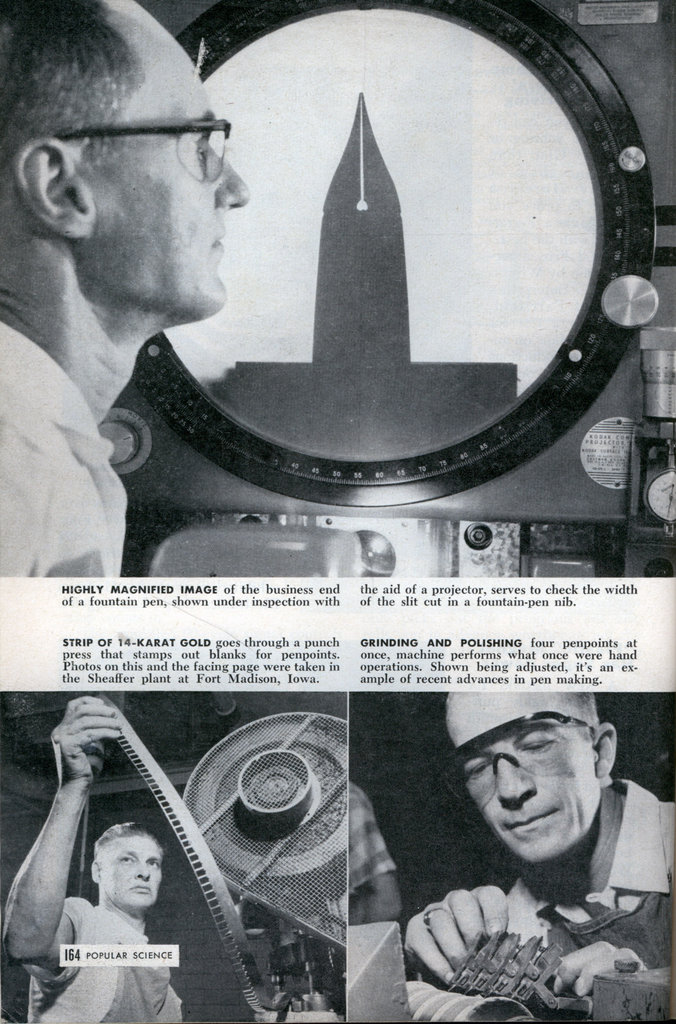 The ubiquity of the American fountain pen still surprises even its export-minded makers. Before V-J Day, isolated Chinese and Burmese guerrilla outfits solved the medal shortage by awarding American fountain pens in lieu of decorations for valor. A New York Times correspondent tells of a British diplomat, some years ago, negotiating a treaty with a tribal chieftain at a remote North African desert outpost. When the time came for the formal signing, Her Majesty’s envoy produced an inkwell and an old-fashioned dip pen. Signing his name with a blotchy flourish, the diplomat proffered his pen to the Arab leader. “No, thanks,” said the Bedouin, “I have my own.” From his bur-noose he drew forth a two-tone American fountain pen, inked a fingertip and solemnly affixed his thumbprint.

Egyptian “dream” pen. The idea of a pen that could hold its own ink supply is one of writing history’s oldest, most elusive dreams. Archaeologists have dug up a “fountain pen” of sortsâ€”a hollow reed into which ink was pouredâ€”from an Egyptian tomb sealed around 4,000 B.C. But the fountain pen we know today is a monument to a middle-aged New York insurance salesman named Waterman.

In 1884 Lewis Edson Waterman, like every smart salesman of his time, carried on his watch chain a collapsible steel dip pen and a stoppered portable inkwell. This arrangement delighted no one but dry cleaners. Various so-called fountain pens, crude affairs with built-in ink reservoirs, had by this time appeared on the market and Waterman bought himself one. Soon afterward, as one of his prospects was about to sign an application for a large policy, Waterman tendered the fountain pen. Then came the deluge. The pen flooded the document, and Waterman’s testy customer gave his business to a rival agent.

“Controlled leak.” Sorely wounded in pocket and ego, Waterman quit life insurance and applied his natural mechanical talents to the invention of a practical fountain pen. It was easy enough to devise a built-in reservoir, but no pen had been invented that would deliver ink in a continuous flow, or “controlled leak,” starting and stopping as required by the writer.

To ensure steady ink feed, Waterman decided to apply the principle of capillary attraction. He made a hair-thin fissure or capillary channel to lead ink to the penpoint, plus another channel to admit air into the ink chamber so that internal air pressure was balanced. Capillary attractionâ€”the phenomenon that makes liquid ignore gravity when confined in narrow channelsâ€”keeps the ink from leaking out, except when the penpoint is in contact with some object. Patented in 1884, Waterman’s famous “fissure feed” pen worked so well that its principle of ink control is still used in all fountain pens except ball points.

A fine fountain pen is a precision instrument requiring expert hand craftsmanship on tiny parts, sometimes fitted to tolerances smaller than those of a good watch. A typical conventional fountain pen has 36 parts and its assembly entails 300 operations. The penpoint or nib must be shaped with microscopic accuracy if the pen is not to leak, and is still preferably made of gold, which resists ink corrosion better than anv base metal.

Where it touches the paper, however, the point is tipped with a speck of extremely hard metal such as osmium, palladium, ruthenium or iridiumâ€”members of the rare and expensive platinum group.

Ball points today account for four-fifths of our annual output of fountain pens. But Americans still buy about as many old-style liquid-ink pens as they ever did, many users preferring the flexibility, expressiveness and individuality of the conventional penpoint.

For lefties, too. At present you can choose a stock-model fountain pen from over 30 nib styles, running the handwriting gamut from the “accountant’s hairline”â€”thinner than paperâ€”through the “executive stub” and on to a “paintbrush” nib made for writing Chinese ideographs. There is even a left-handed pen, its nib especially ground to avoid scratching when it’s held by a southpaw.

Once you’ve broken in your pen to your writing style, true pen artists urge you to reserve it for personal use. Another hand may change the “set” of the point, they say. Mary Roberts Rinehart, for example, writes with a 25-year-old favorite pen that no one else is ever permitted to touch.

Only four years after Lewis Waterman’s invention, one John Loud applied in 1888 for a U.S. patent on a ball-point pen. But technical bugs stood in the way until 1945. Then, with a new design, the ball point zoomed to popularity and was hailed as the postwar “successor to the fountain pen.”

Two years later the bubble burst. Fifteen-dollar price tags were slashed to 15 cents, but no one wanted the pens.

In a ball point, a ball revolving in its socket wipes thick, gelatinous ink from an inner reservoir onto the paper. The trouble was with the ink. It clogged, jammed or skipped; it rubbed over paper, wasn’t water-fast, disappeared after exposure to sunlight. Moreover, a moist thumb could lift a signature and transfer it to another check or document. Forgers rejoiced. Some banks refused to honor checks signed with ball points.

Rescue for the industry came by way of a Hungarian chemist, Fran Seech, who had escaped from Nazi-occupied France and made his way to Los Angeles. Fired from a job with a ball-pen company when disaster hit the business, Seech rented a cubbyhole “laboratory” and attacked the ink problem. In 1949 he discovered the secret formula which, experts agree, saved the dying ball-point industry.

The once-discredited ball point made a remarkable comeback. Five years later Paper Mate was selling 30 million dollars’ worth of pens a year, 80 percent of all ball points sold in America.

To meet ball-point competition, pen engineers have invented all sorts of new gimmicks to overcome the liquid-feed pen’s one obvious disadvantage: the need for frequent, messy refilling from ink bottles. Sheaffer’s answer is the “Snorkel.” The ink bottle is still needed, but at a twist of the pen’s barrel a thin tube snakes out of the point to suck up ink. The penpoint remains dry. Waterman’s new cartridge-filled pen, and others’ models like it, load much like a ball point. You simply unscrew the barrel and insert a neat, transparent polyethylene cartridge full of regular liquid ink. The Parker 61, just introduced, is the first practical self-filler, forsaking levers and plungers altogether. Just dip it in ink and it drinks its fill automatically, by a reverse application of our old friend capillary attraction.

Liquid lead. Virtually all the old-line fountain-pen makers are now making ball points, too. And Parker and Scripto jointly have developed a “liquid lead pencil” that writes like a ball point. It produces an erasable line indistinguishable from ordinary pencil writing, holds enough liquefied graphite to write as much as a wood pencil five feet long, and bodes ill for the pencil-sharpener industry.

Which will win outâ€”the ball point or the liquid feed? The pen of the future may resemble neither.

“The fountain pen of the future,” Waterman’s president, Robert D. Howse, told me, “will write for a lifetime without refilling. Super-concentrated dry ink, drawing its moisture from the air at the moment of writing, will make it possible to pack a century’s supply of ink into a single one-inch capsule.”