Popular Science
Issue: May, 1980
Posted in: Computers
Tags: Atari, Texas Instruments
10 Comments on Three new home computers that teach themselves – and teach you how to use them (May, 1980)

Three new home computers that teach themselves – and teach you how to use them (May, 1980)

Remember: You haven’t lived until your home computer says “hello” and asks you to “please enter a number.” 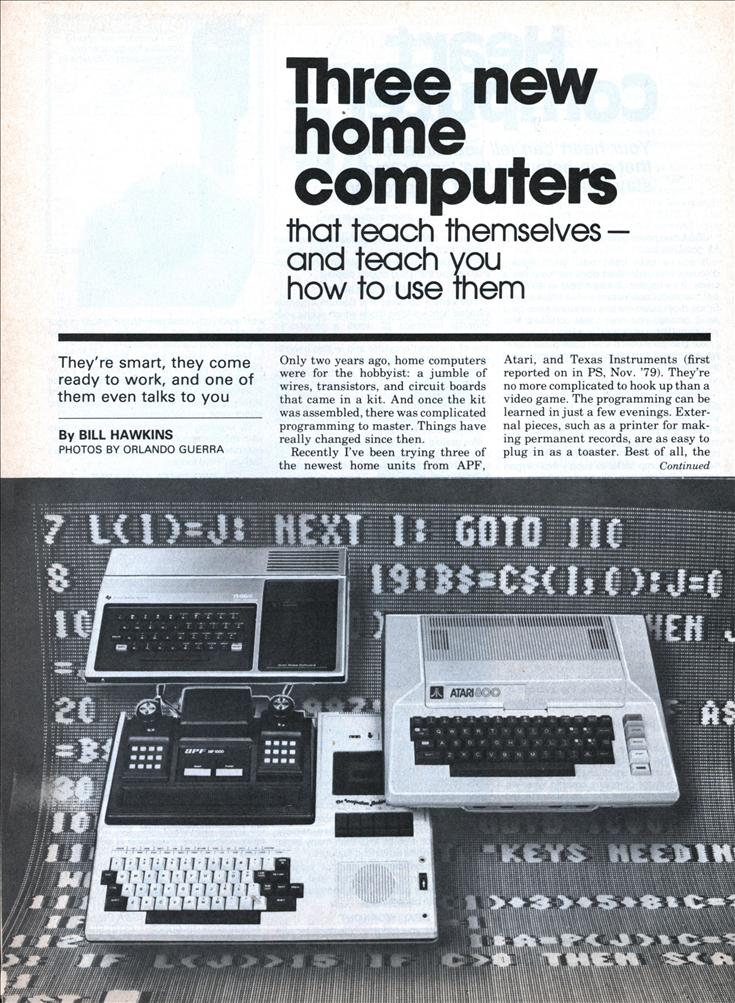 They’re smart, they come ready to work, and one of them even talks to you

Only two years ago, home computers were for the hobbyist: a jumble of wires, transistors, and circuit boards that came in a kit. And once the kit was assembled, there was complicated programming to master. Things have really changed since then.

Recently I’ve been trying three of the newest home units from APF, Atari, and Texas Instruments (first reported on in PS, Nov. ’79). They’re no more complicated to hook up than a video game. The programming can be learned in just a few evenings. External pieces, such as a printer for making permanent records, are as easy to plug in as a toaster. Best of all, the computers can teach themselves.

Basically, these new computers resemble each other. But with prices spread from $600 to well over $1000, there are important differences. Some of that is in what you get now. In other cases, your money goes for what you can add later. I found strengths and weaknesses in each machine.

Before getting into the specifics of these systems, it’s important first to know the basics of what these machines offer.

Minimum gear The brain of a computer is a tiny integrated circuit chip (microprocessor). But for that brain to do actual work, it needs more.

It needs a keyboard for entering information into the computer. To get info back out again so you can see it, the system requires a display. This can be its own (dedicated) video monitor or, as it is in most cases, a standard TV set.

And somewhere between putting data in and getting it out, the computer must have a memory—more integrated circuit chips that can hold bits of information for the system to use.

Conventional memories retain information only until you switch off the power. To save programs or raw data for future retrieval, these home computers include a cassette-tape storage system—usually a standard cassette recorder that’s either attached or built into the computer box.

Now the system has the hardware necessary to enter, retrieve, and save data. But computers are stupid. The final ingredient they need is intelligence—programming—to teach them what to do when asked to print out 2+2, for example.

Using their built-in language-called BASIC—these computers convert your English commands, from the keyboard, into binary numbers the microprocessor can use. Thus all you need to do is learn a few key words used by BASIC to make the system work.

Another plus is flexibility—extremely important to the future of any computer—both in hardware and software. If you want to add a printer later, for example, you not only need a place to attach it to the computer (hardware port), but the computer must also know how to use it (software control). In that respect, these systems become quite clever.

Each contains a monitor program.

When you first switch on the computer, the monitor takes over to give the microprocessor instructions—how to read the keyboard, how to put info on the TV screen, etc. But the monitor also “looks” at what’s attached to the computer. It runs a short test and, if you’ve connected a printer, for instance, it knows that all commands dealing with the printer are operable.

The same holds true when adding a disk system—a high-speed recording device. Data are saved on a record-like disk that’s actually a round, flat piece of magnetic recording tape. Normally, disks are very difficult to “bring up” in a computer system. But, because of these advanced monitors, it’s simply a matter of plugging in the new disk drive when you’re ready to use one. Now let’s take a closer look at the three computers.

APF The APF Imagination Machine is actually made of two separate components. The first is APFs MP-1000 programmable video game ($130 bought separately), which contains the microprocessor, memory, and video circuits (RF out to color TV). As a stand-alone unit, it can use APF’s game cartridges, but will not accept your custom programming. Place it atop the separate keyboard ($500) and connect them together (see photos), however, and the result is a full-scale computer that accepts your commands.

The keyboard box also contains a built-in stereo cassette deck and speaker. As one track of the cassette is played into the computer to give it machine instructions, the other track can contain conventional audio: human instructions (you record with a separate mike) or programming notes to yourself.

The keyboard is of good quality with conventional key placement—important for text-oriented programs and touch-typists. Also, standard BASIC commands such as PRINT or RUN needn’t be typed out each time you need them. Pressing a special control key, along with another key marked with the word you need, automatically spells the word on the screen—a clever, time-saving idea.

The Imagination Machine has the lowest price in this group, and the add-on approach is also economical if you want to start with just the video game. But it does have one drawback. APF has treated each part as totally separate: There are two on/off switches, two power supplies to plug in, two reset buttons, and too much confusion until you get used to it.

Atari Although the Atari 800 will play games with you, it is one of the most serious home computers I’ve seen. A printer, tape deck, and up to four disk drives simply plug in the side. The top swings up and off (see photos), giving you access to all its memory—including the monitor program saved in a permanent (ROM) memory module. (You may not have any reason to change it now, but it gives you added flexibility if Atari comes up with a better one later.) Normal programming memory (RAM) can be added, expanding the system up to 48,000 bytes (48K)— more than enough for most home applications.

Keyboard quality is excellent and special keys, such as INSERT and BACK SPACE, make text creation and editing a breeze with the right software.

Besides the conventional RF connection for attaching the system to a regular TV set, there is also a video jack for connecting it to a video monitor which, theoretically, should give you an even sharper picture.

It’s a good system, but expensive. Besides the cost of the basic system, add in the price of a new color TV.

Texas Instruments If you like bells and whistles, the TI-99/4 should please you. It accepts all the conventional add-ons, such as disk drives, a printer, and a cassette tape recorder, through a side connection. But there is one add-on unique to TI: a speaking module. With it, the computer talks through the speaker in the video monitor ($150 for the module plus $45 for the software necessary to use it).

The module comes with about 300 words (expandable to about 900), and any one or strings of them can be called in your program at any time. The module I tried was just a prototype, but the intelligibility of the voice was incredible. You haven’t lived until your home computer says “hello” and asks you to “please enter a number.” Add together the speech, graphics, and musical capability of this machine, and it could almost become another family member.

Cost of the system ($1150) isn’t bad, considering that it includes the color-TV monitor. There was one disappointment, however. I found the keyboard more difficult to use than the others. It is not standard, so a touch-typist may have a few problems with it.