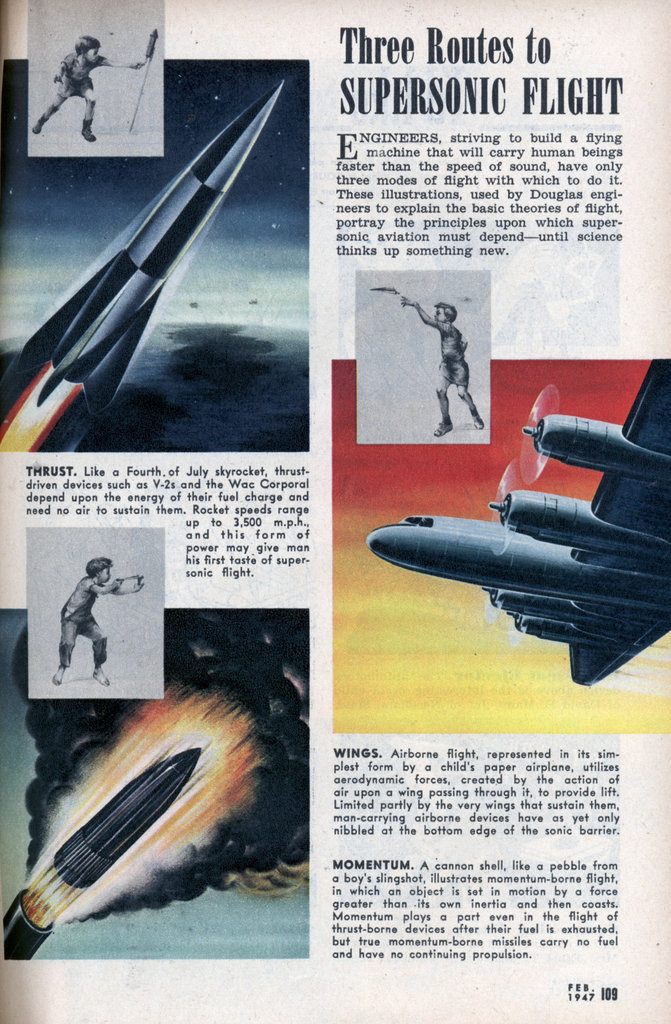 ENGINEERS, striving to build a flying machine that will carry human beings faster than the speed of sound, have only three modes of flight with which to do it. These illustrations, used by Douglas engineers to explain the basic theories of flight, portray the principles upon which supersonic aviation must depend—until science thinks up something new.

THRUST. Like a Fourth of July skyrocket, thrust-driven devices such as V-2s and the Wac Corporal depend upon the energy of their fuel charge and need no air to sustain them. Rocket speeds range up to 3,500 m.p.h., and this form of power may give man his first taste of supersonic flight.

WINGS. Airborne flight, represented in its simplest form by a child’s paper airplane, utilizes aerodynamic forces, created by the action of air upon a wing passing through it, to provide lift. Limited partly by the very wings that sustain them, man-carrying airborne devices have as yet only nibbled at the bottom edge of the sonic barrier.

MOMENTUM. A cannon shell, like a pebble from a boy’s slingshot, illustrates momentum-borne flight, in which an object is set in motion by a force greater than its own inertia and then coasts.

Momentum plays a part even in the flight of thrust-borne devices after their fuel is exhausted, but true momentum-borne missiles carry no fuel and have no continuing propulsion.