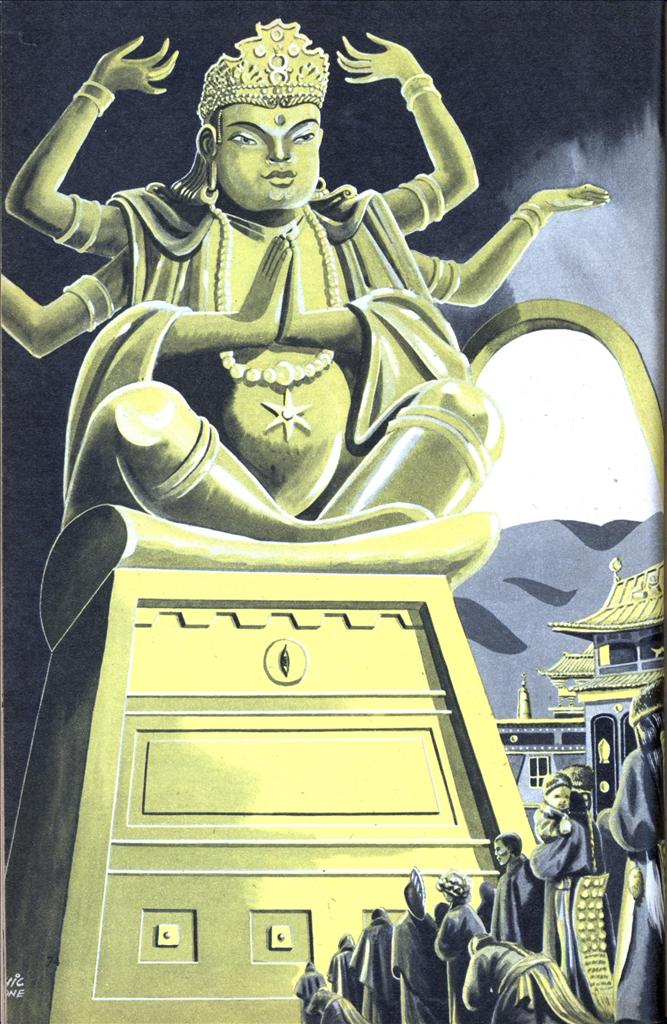 I have watched swaggering warriors with rakish foxskin hats, knee-length boots and huge sheepskin cloaks armed to the teeth with gold-damascened dirks, swords or rifles. On their chests dangled heavy beaten-gold charm-boxes housing tiny idols to ward off bullets and evil spirits. Their pigtails were wound about their foreheads and fastened over the left temple with a gold-filigreed ornament, embellished with precious stones.

I have seen women who were walking fortunes. In addition to the jewel-and-gold charm-boxes, necklaces, rings and earrings, they wore heavy breast-plates and back-pieces to provide even more space for ornamentation. These women, especially those of the nomad tribes in central and northeastern Tibet, wore their hair done up in 108 braids, suggested by the 108 volumes of the Kan-dywr—the Tibetan Bible. The braids reached down to the small of their backs, and attached at the ends was a piece of heavy cloth extending down to the ankles. This was richly studded with ornaments of silver, coral, amber, turquoise, and gold nuggets—some of them as big as walnuts.

But don’t reach for your hat. The gold rush hasn’t started yet—unless you count the Chinese Communist invasion. For one thing, there is no train, plane, or boat service to Tibet that you as an American could use. You might, perhaps, be able to wangle passage on a plane flying from Shanghai to Lanchow or Chengtu. You’d save wearisome weeks of surface travel that way. But then you’d be forced to step almost from the cabin of your airliner to the saddle of a pony, and spend many weeks of riding before you even cross the border into Tibet. That’s assuming optimistically that the Chinese Reds would allow you to come at all.

Of course, if you’ve got a sizable bankroll to invest in the project—purely as business speculation—you might want to hire a plane, or fly your own, all the way in. Obviously, it would be a profitable venture if there is so much gold around and all you had to do was to load up your plane and fly it out.

Sounds simple—but it isn’t quite that easy.

For one thing, as the “Holy Rome” of Buddhism, Tibet is a forbidden land— literally. It is perhaps the most religious country in the world today. The foreigner who crosses its border brings with him the contamination of the outer world of materialism. They don’t want him.

Apart from this, the Land of the Lamas is physically forbidding. Located in the very heart of Asia, high in the Himalayas between China and India, with an area approximately that of Mexico, Tibet is over two miles above the level of the sea. Travel on this windswept, sparsely populated plateau, where little grows and fuel and game are none too plentiful, is discouraging and hazardous at best. Expeditions must be fitted out with scores of pack-animals to carry supplies to last many months, with a sizable complement of natives to attend them. Precipitous canyons must be crossed. Mountain passes are up to and over 15,000 feet high, where the air is so rarefied that the heart pounds like a trip-hammer, leaving you gasping for breath like a drowning man.

And bandits are there—plenty of them. Every man in the nomadic central and northern parts of the country is a potential bandit. In fact, the way you say “hello” to a stranger you meet on the lonely trails is to sling your rifle off your back and place it across your lap as you sit in your saddle, watching him warily in readiness for a sudden attack.

Not that the Tibetan is especially bloodthirsty. To take a life is a most serious offense for the true Buddhist. Robbery, on the other hand, appeals to the average Tibetan much in the same way that football and boxing appeal to us. It is a form of exercise—an outlet for pent-up restlessness and the desire for physical action after the monotony of tending flocks of sheep and cattle.

A tommy-gun or two in your expedition would, of course, discourage any but the most formidable attacks. But that would just be asking for more trouble. For a slain man’s tribe is bound to avenge his death—and a special dispensation from the Church is given for this eye-for-an-eye justice.

But the gold is really there. Practically every river washes through sands filled with gold. The gold mines of Jalung in western Tibet have been worked since the late 19th century—but in a crude and wasteful fashion. Scientific explorations have revealed nuggets varying from the size of peas to walnuts. In fact, as far back as 1888, the Russian explorer Prjevalsky predicted that northern Tibet would prove to be a “second California.”

Even so, once you get your hands on all that gold, you are still faced with the problem of getting it out to a market where you can convert it into cash. With no modern motor roads or railways leading into Tibet, whose borders are at least a thousand miles from the nearest seacoast, horseback and yakback are still the only forms of transport available.

Perhaps, in a sense, all this is a fortunate circumstance for the Tibetans. It may postpone a rape and pillage like that of the Americas at the hands of the gold-greedy Spanish Conquistadores. Meanwhile, the peace and quiet seclusion within their scholarly lamaseries will remain undisturbed—at least until the Chinese Reds reach them.

Like the golden-roofed buildings, for example, in the lamasery of Lhabrang, one of the largest in Tibet, where I spent many delightful months with my friend, Alakh Jamv Japa, its Grand Living Buddha.

Of the many golden-roofed buildings in Lhabrang, the most impressive was its principal idol-house. It was a five-story structure built of massive stones, topped with an ornate penthouse heavily sheeted with beaten gold. The four corners of this glittering superstructure were turned up in the Chinese style and tipped with grotesque gargoyles.

The most amazing thing about this Golden-Roofed Idol House was that, massive though it appeared, it was still no more than a shell to house the huge Golden Buddha which almost filled its interior. The Buddha was over 75 feet high, reaching from the floor to the ceiling, with numerous snakelike arms extending from wall to wall. It was sheeted with burnished gold, seemingly aflame from the reflections of thousands of flickering butter lamps set in tiny niches.

Whenever I think of the ruthless fate in store for this Land of the Lamas if and when the gold rush starts, I remember that Golden Buddha and the benevolent expression on its softly-molded features. And I can’t help but wish this “Holy Rome” of Buddhism—this golden roof of the world—could remain a forbidden land forever.

But I know that the magic lure of gold makes it impossible.