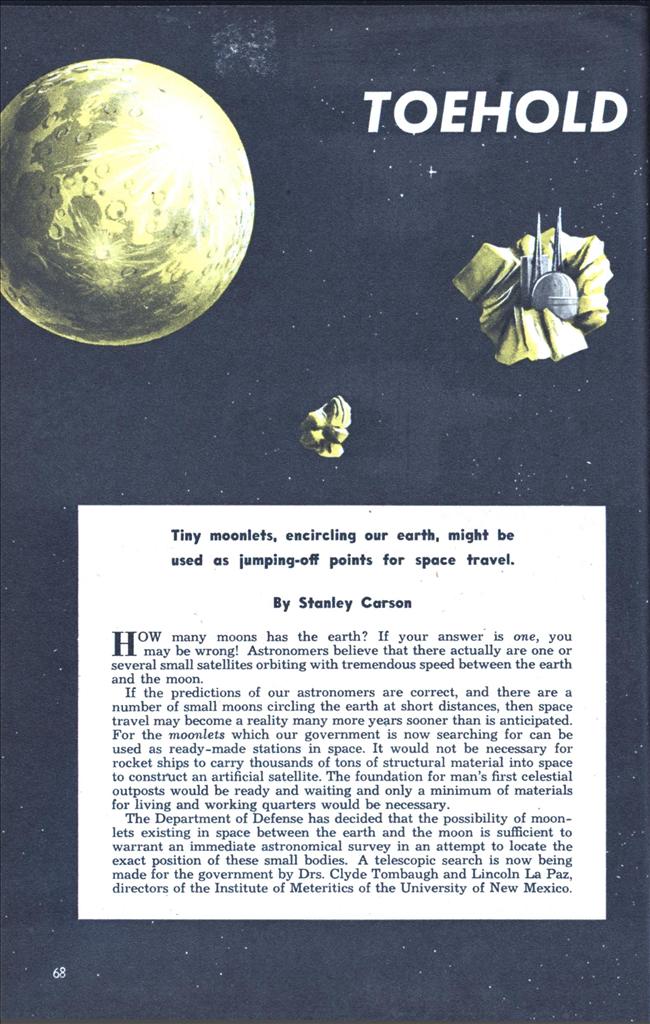 If the predictions of our astronomers are correct, and there are a number of small moons circling the earth at short distances, then space travel may become a reality many more years sooner than is anticipated. For the moonlets which our government is now searching for can be used as ready-made stations in space. It would not be necessary for rocket ships to carry thousands of tons of structural material into space to construct an artificial satellite. The foundation for man’s first celestial outposts would be ready and waiting and only a minimum of materials for living and working quarters would be necessary.

The Department of Defense has decided that the possibility of moonlets existing in space between the earth and the moon is sufficient to warrant an immediate astronomical survey in an attempt to locate the exact position of these small bodies. A telescopic search is now being made for the government by Drs. Clyde Tombaugh and Lincoln La Paz, directors of the Institute of Meteritics of the University of New Mexico.

In a recent interview Dr. La Paz said that the United States had “better get on the ball quickly” if it is not already working on a station in space. He believes that if the search for a small, nearby moonlet is successful it can be built up as an outpost in space.

“Using such natural stations,” said Dr. La Paz. “would save many billions of dollars of taxpayers’ money which would otherwise have to be spent building an artificial satellite vehicle.”

Many astronomers and scientists believe the chances of eventually finding the moonlets are good. It has been pointed out that while the earth has only one known satellite—the familiar moon—other planets have from two to eleven small bodies as moons and that many more probably exist, but have not been seen in telescopes.

Mars, for example, has two tiny moons, Phobos and Deimos. Compared to the earth’s moon with a diameter of 2,163 miles, the two tiny satellites of Mars can hardly be classed as moons, but rather fit into the smaller category of moonlets. Phobos, 5,800 miles from the planet, is only 10 miles in diameter and Deimos, 14,600 miles from Mars, is but five miles in diameter!

With its eleven moons, Jupiter is a perfect example of a solar system in miniature.

Its satellites range from moonlets an insignificant 15 miles in diameter to two great bodies, Ganymede and Callisto, each 3,200 miles in diameter. The closest moon of Jupiter is only 112,600 miles from the monster planet and the most distant orbit is 14,880,000 miles away.

Space abounds with smaller bodies variously described as planetoids and asteroids. Ceres is the largest known of these wandering nomads of the solar system and is 480 miles in diameter. The planetoid Hermes, one mile in diameter and with a mass of three billion tons, can come as close to the earth as 220,000 miles—closer than our moon. The majority of the “minor planets,” however, are less than 50 miles in diameter. At least 1,500 are charted and their orbits known.

There is good reason to believe, therefore, that the earth also may be the mother world of one or a group of small moonlets. These may circle our planet anywhere from 1,000 to 200,000 miles out in space though they are probably quite close to the earth, which accounts for their not having been sighted before.

According to Dr. C. M. Clemence, director of the Nautical Almanac Office of the United States Naval Observatory in Washington, the chances are “very good” that there are one or more small satellites between the earth and the moon.

Such objects will be extremely difficult to find, Dr. Clemence believes. They would have become disastrous meteorites eons ago except that they fell into an orbit about the earth.

Dr. Clemence stated that the speed of the tiny moons would depend upon their distance from the earth. A satellite 1,000 miles in space would whip around the planet in less than two and one half hours, which is one good reason why they have never been spotted. They would be moving too fast to be caught on the usual photographic plates.

Another reason why the moonlets have not yet been sighted, explains Dr. Clemence, is that most of the time they are in the earth’s shadow and therefore do not shine. Every now and then, however, the moonlet in its orbit will whirl beyond the shadow of the earth for a short period of time and may be seen visually. Dr. Clemence believes that one way to track the moonlets is to move the camera at the same speed as the satellite (as it would be seen) would flash through the sky.

Even if the search is successful, Dr. Clemence believes the project will require at least two to three years for completion.

Other astronomers do not feel quite so keenly about the chances of discovering the elusive moonlets. According to Dr. Hugh S. Rice (for whom the Rice Asteroid is named), Research Consultant, Astronomy, The Hayden Planetarium, it is definitely possible that the moonlets do circle the earth, but it is also improbable that we shall be successful in our quest. Dr. Rice points out, and with good reason, that sky observation and study have been conducted for many years. “To my knowledge,” Dr. Rice stated, “our observations have not detected any bodies orbiting about the earth other than the moon.”

The standard method of celestial study and photography is to use an astrograph. This instrument consists of a telescope with a camera plate attached to photograph certain areas of sky. Usually the astrograph is set so that it will follow exactly the motions of the stars as they “swing about the heavens” during the night hours.

Actually, of course, the astrograph’s movement is so governed that it does not turn-with the earth as it rotates. In this fashion, the developed photographic plates will show the distant stars as fixed circles of light. Smaller bodies within the solar system, such as asteroids or moonlets, will appear as streaks of light.

The planetoid Ceres was discovered in this manner, as was the outermost planet, Pluto.

Many asteroids approaching close to the earth are detected in this fashion, although the majority seem to have been discovered by accident. The astronomers, intent upon photographic scrutiny of the stars, have found the tracks of the asteroids across the developed film.

The problem in searching for the moonlets is twofold. Since they are presumed to orbit closely around the planet, as Dr. Clemence pointed out, they are subject to illumination by the sun only during short periods of time. It is’also possible that astronomers have already tracked a moonlet, but were led to believe that what appeared on their photographic plates was a meteor trail.

A moonlet 1,000 miles beyond the earth, for example, must have an orbital velocity of approximately 17,000 miles per hour. That means that if the moonlet was exposed to a lengthy time exposure, it would show as a brilliant streak and could certainly be assumed to have been the passage of a “shooting star.”

Dr. Rice does not believe that the astro-graph, despite its long and successful use in the past, is particularly well suited for the moonlet search. He points out that its angle of view is very narrow and that the astrograph is designed to take large images in very small areas of sky. Astrographic study for moonlets, therefore, would be a long and tedious task.

“There is another method of photographic observation of the sky,” Dr. Rice added, “in which the astrograph is employed to take time exposures. The stare are allowed to appear in the pictures as streaks of light. A deviation from this ‘light streaking’ will indicate another type of celestial body.”

Astronomical science, of course, has other tools at its disposal. Radio detection of small meteors and meteor swarms, during daylight and darkness, possibly can be adapted to the moonlet search. New methods developed during the last several years employ radio waves as “Jacob’s Ladders” to the extreme upper atmosphere. These radio investigations have revealed that the earth is bombarded by a barrage of 10,000 to 100,000 meteoric dust motes every second.

After a radio wave study of 13,000 individual meteors, scientists determined through radio measurements that these celestial bullets travel a speed of from 10 to 45 miles a second.

Radio astronomy methods have permitted scientists to discover and track meteors with an efficiency 100 times greater than that possible through visual observation by telescope. The most important fact revealed by the radio astronomy work is that great clusters of meteoric material move in specific orbits in space. These regularly visit the planets, each time depositing showers of iron and stone particles upon the various worlds.

It is reasonable to assume that the radio astronomy methods, as well as radar detection, can be adapted to the search for moonlets.

Whatever the methods employed, the armed forces appear determined to exhaust the possibilities of the moonlets in space. As Dr. La Paz stated, the moonlet orbiting about the earth is a natural base for a scientific space station upon which we could establish living and working quarters for the first spacemen. The problems of space travel are manyfold and one of the most extensive of all the projects envisioned for the conquest of space is the incredible task of constructing an artificial satellite in an orbit about the earth.

It has been anticipated that such a venture would require many millions of tons of rocket fuel, the passage of many years, billions of dollars, and would impose a strain on the nation’s economy. A moonlet would eliminate the necessity for transporting hundreds of tons of structural members and materials for basic living and working quarters, since the essential structures for supporting life could be erected directly on the moonlet surface.

Of course we still have the problems of how to catch the moonlets when and if we do find them, how we will counteract the pull of gravity on the moonlets themselves, what we will eat, how we will breathe, etc., but our scientists are already hard at work, trying to solve such problems and they have made great strides indeed. It is entirely possible that by the time the tiny satellites are finally spotted and properly charted we will already have amassed enough technical information and built enough equipment to take space travel out of the realm of science fiction and projection and plunge it like a flaming sword into the pulsating domain of reality.