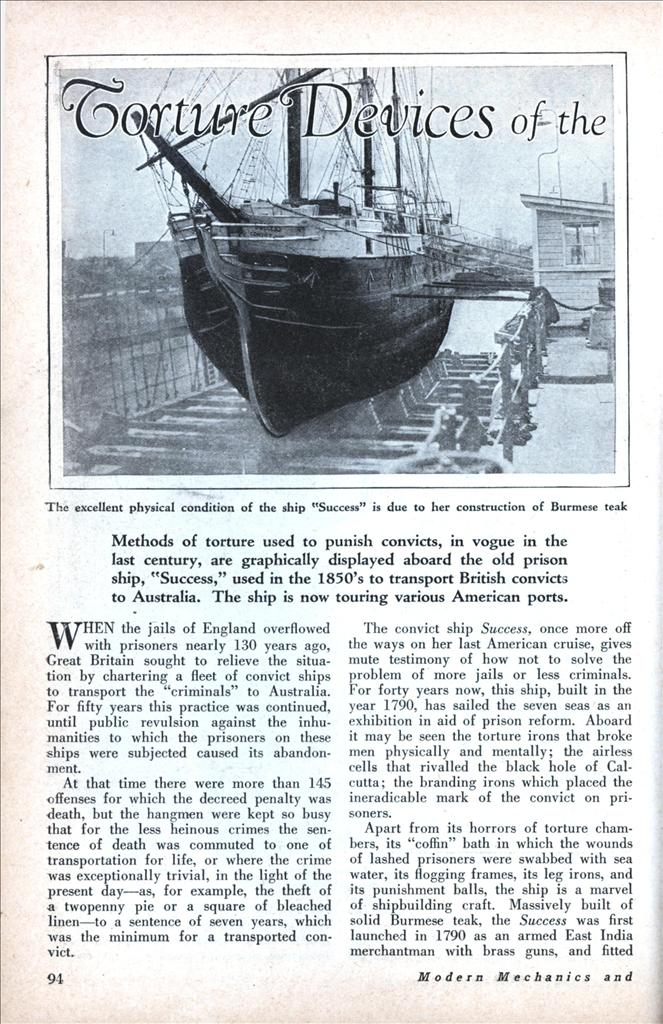 Methods of torture used to punish convicts, in vogue in the last century, are graphically displayed aboard the old prison ship, “Success, ” used in the 1850’s to transport British convicts to Australia. The ship is now touring various American ports.

WHEN the jails of England overflowed with prisoners nearly 130 years ago, Great Britain sought to relieve the situation by chartering a fleet of convict ships to transport the “criminals” to Australia. For fifty years this practice was continued, until public revulsion against the inhumanities to which the prisoners on these ships were subjected caused its abandonment.

At that time there were more than 145 offenses for which the decreed penalty was death, but the hangmen were kept so busy that for the less heinous crimes the sentence of death was commuted to one of transportation for life, or where the crime was exceptionally trivial, in the light of the present dayâ€”as, for example, the theft of -a twopenny pie or a square of bleached linenâ€”to a sentence of seven years, which was the minimum for a transported convict.

The convict ship Success, once more off the ways on her last American cruise, gives mute testimony of how not to solve the problem of more jails or less criminals. For forty years now, this ship, built in the year 1790, has sailed the seven seas as an exhibition in aid of prison reform. Aboard it may be seen the torture irons that broke men physically and mentally; the airless cells that rivalled the black hole of Calcutta; the branding irons which placed the ineradicable mark of the convict on prisoners.

Apart from its horrors of torture chambers, its “coffin” bath in which the wounds of lashed prisoners were swabbed with sea water, its flogging frames, its leg irons, and its punishment balls, the ship is a marvel of shipbuilding craft. Massively built of solid Burmese teak, the Success was first launched in 1790 as an armed East India merchantman with brass guns, and fitted handsomely for the reception aboard of princes, nabobs, and the wealthy traders of the Orient.

Her tonnage is 1100, and she is 135 feet long with 30 feet beam. Her solid sides are 2 feet 6 inches thick at the bilge, and her keelson is a solid teak baulk of great thickness, with sister keelsons little less massive. Her square cut stern and quarter galleries stamp her with the hallmark of antiquity, but her bluff bows show that she could never have distinguished herself for a high rate of speed.

The ship was chartered by the British Government in 1802 as one of a fleet of five convict ships to transport prisoners to Australia. Cells were constructed on the ‘tween and lower decks, and a large force of warders was employed to guard the prisoners. “Refractory” prisoners were immured in dungeons in the dark depths of the lower deck, their only exercise being restricted to one hour in every twenty-four, when they were marched from stem to stern upon the upper deck. The course they followed can still be perceived by tracing the grooved pathway worn into the original planks of the deck.

When a prisoner broke for freedom, and was captured, he was compelled to wear a heavy ball of iron, weighing 72 pounds, attached to his belt by a chain. The eyes of refractories on parade were sometimes lightly bandaged, and a “black gag” was used to silence their cries of pain, the gag consisting of a wooden bit in a leather bridle, the straps buckling around the convict’s head and neck. The blacksmith’s forge was under the fo’c’sle head, where the iron anklets and chains weighing from 7 pounds to 56 pounds were forged.

The corner cells on either side of the lower deck were the dreaded “black holes” in which prisoners who had been guilty of some breach of discipline or fractious conduct were punished by solitary confinement lasting from one to one hundred days, according to the gravity of the offense. These small and tapering torture-chambers measure only two feet eight inches across. The doors fit tight as valves and close with a swish, excluding all air except what can filter through a perforated iron plate over the bars above the door. A stout iron ring is fastened knee high in the shelving back of the cell and through this ring the right hand of the prisoner was passed, and then handcuffed to the left wrist. He was thus prevented from standing upright or lying down.

Constant applications of the “cat, ” imprisonment in the “black hole” and other punishments were the instruments relied upon for producing a reform. In each of the larger cells, on either side of the corridor, the floor is worn into hollows and grooves, close against the doorway by the constant jangling and friction of the prisoners’ leg-irons.

In 1851 the Success was permanently stationed as a receiving prison in Hobson’s Bay, Australia, but in 1857 the disclosures that had been made of the inhuman treatment accorded the prisoners created an outcry in Australia that resulted in 1868 in the abandonment of the hulk system. For some years later the Success was used as a women’s prison, then she became successively a reformatory ship and ammunition store, and later all the prison hulks were ordered to be sold on the express condition that they were to be broken up, and their associations lost to the recollection of the people of Australia.

By a clerical error, this condition did not appear upon the terms of sale of the Success, hence she remains the only British convict ship afloat on the seven seas. In 1885 she was scuttled and sunk in Sydney harbor where she lay under the waters of

Fort Jackson for five years. Then she was raised to be exhibited as an educational object lesson in prison reform. Since then the Success has been on exhibition in the Australasian colonies, has twice circumnavigated England and Ireland, has made one complete circuit of American ports, and now is on her last scheduled cruise in American waters.

The exhibits on the ship include a branding iron with which convicts were branded on the palms of the hand with a broad arrow. They were chained to a triangle while this operation was being performed. Dangerous prisoners were rendered helpless by the use of a body iron with handcuffs attached. There is an iron straight jacket, and a spiked collar, the chain of which was kept short to keep the convict in a stooping posture. The “silent guard” is a ringed stone of Australian blue granite to which twenty convicts were chained at a time. With wrists and ankles fastened to the flogging frame, the prisoner was at the complete mercy of the convict flagellator.