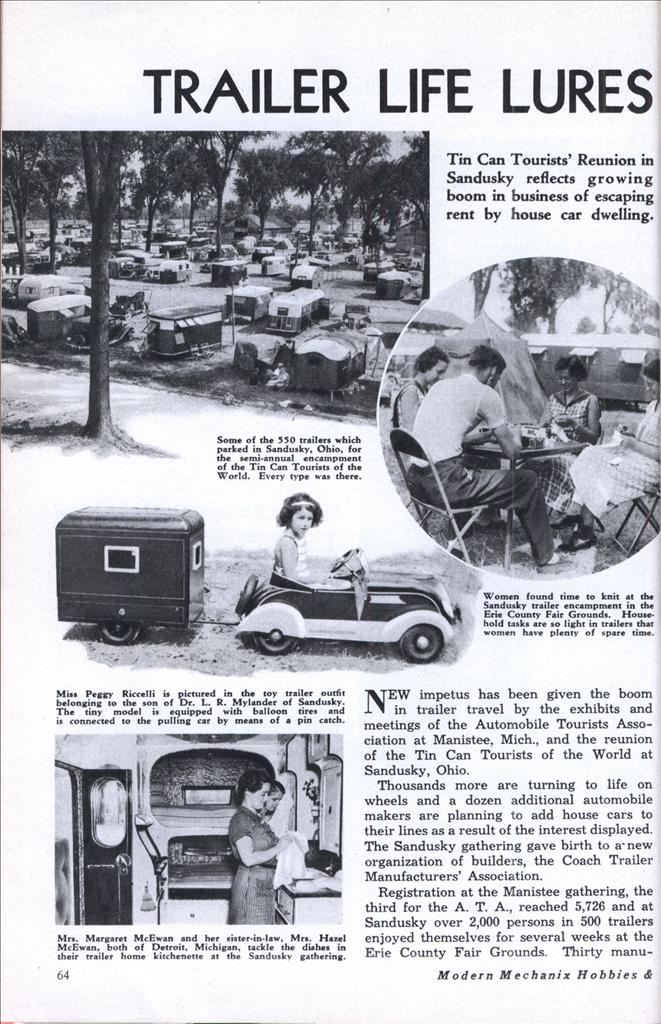 NEW impetus has been given the boom in trailer travel by the exhibits and meetings of the Automobile Tourists Association at Manistee, Mich., and the reunion of the Tin Can Tourists of the World at Sandusky, Ohio.

Thousands more are turning to life on wheels and a dozen additional automobile makers are planning to add house cars to their lines as a result of the interest displayed. The Sandusky gathering gave birth to a new organization of builders, the Coach Trailer Manufacturers’ Association.

Registration at the Manistee gathering, the third for the A. T. A., reached 5,726 and at Sandusky over 2,000 persons in 500 trailers enjoyed themselves for several weeks at the Erie County Fair Grounds. Thirty manu facturers displayed new models of every type at both gatherings.

Scores of noted trailer travelers gathered at Sandusky to hear that the organization had grown to 97,000 members since its formation at Tampa, Fla., in 1919 and to enjoy a recreation program arranged by the entertainment committee of Harry Bolus, Mansfield, Ohio.

Mr. Bolus knows something about entertaining. For many years he was a member of the Fields Minstrels and was long a vaudeville star. Though they have a home in Mansfield, Mr. and Mrs. Bolus spend much of their time in their famous trailer.

Oldest of the tourists present was R. W Vaughn of Rome City, Ind. A charter member of the organization and a former officer, he is still active in its affairs at the age of 85. He credits his health to life in the open.

Mrs. Guy E. Russell of Ripley, N. Y., who has spent most of the recent years living in a trailer with her husband and their four children, was enthusiastic in her praise of house car life.

“We have less worries and after a while one takes on a more cheerful outlook on life,” she said. “We live far cheaper than we could in most any city.

“The time required for cleaning our home daily is negligible. In the food problem, we have the advantage of picking up fresh vegetables and fruits from roadside stands. Hucksters make daily rounds.

“We don’t eat any more canned food than city folk though we are called ‘Tin Canners!’ Meats, ice and other necessities are bought from nearby stores and delivery service is given if we are staying a while. Prices are less than average. We nearly always buy in quantities, and farmers and truck gardeners give us a rate.

“My children get every advantage of education. When we stay in a place for several months, they are sent to the public schools. In some subjects, geography and history, they excel. They have traveled through most of the 48 states and learn more by seeing than they could from books.”

Ira W. Green of Vassar, Mich., royal chief, said attendance exceeded that of the previous reunion and predicted a record attendance at the Sarasota, Fla. Officers are elected and business transacted at this meeting. Capt. Edward H. Jungclas, president and secretary of the A. T. A., announced a get-together meeting at Lake City, Fla., Nov. 22 to 28, and a winter convention at Clearwater, Fla., Jan. 29 to Feb. 8.

Ease and enjoyment of the trailer dwellers at the meetings converted many to the idea. Groups sat about under awnings. Women clicked needles at knitting or crocheting. Dogs frolicked on the grounds. There was a checker tournament, dances and movies. Monday is wash day.

The “Tin Canners” are an organization without dues, fees or assessments. The name comes from their food and not their vehicles. Their original emblem was a can tied to a radiator cap. A neat metal emblem is now placed on car fronts. The sale of emblems and membership badges provides entertainment and operating expenses for the organization.

The organization plans a series of winter trailer exhibitions in various parts of the country. A trailer show will be a feature of the annual New York Auto Show opening this year on Nov. 11.

Many automobile and truck manufacturers have entered the trailer field either directly or through subsidiaries. Among the latest are the Pierce-Arrow Motor Corp. of Buffalo with the Travelodge, the Federal Motor Truck Co. of Detroit with the Motohome and Motomart. The Hayes Body Co. is making a new Motor-Home trailer at Grand Rapids, Mich. The Aladdin Co. of Bay City, Mich., has just produced a new Mayflower trailer.