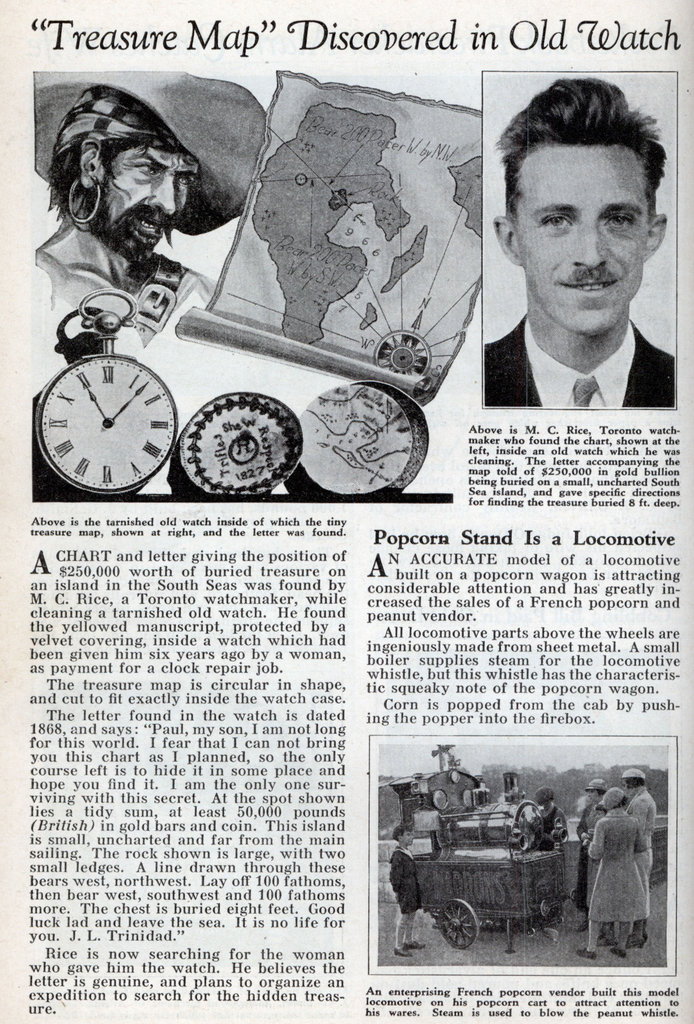 A CHART and letter giving the position of $250,000 worth of buried treasure on an island in the South Seas was found by M. C. Rice, a Toronto watchmaker, while cleaning a tarnished old watch. He found the yellowed manuscript, protected by a velvet covering, inside a watch which had been given him six years ago by a woman, as payment for a clock repair job.

The treasure map is circular in shape, and cut to fit exactly inside the watch case.

The letter found in the watch is dated 1868, and says: “Paul, my son, I am not long for this world. I fear that I can not bring you this chart as I planned, so the only course left is to hide it in some place and hope you find it. I am the only one surviving with this secret. At the spot shown lies a tidy sum, at least 50,000 pounds (British) in gold bars and coin. This island is small, uncharted and far from the main sailing. The rock shown is large, with two small ledges. A line drawn through these bears west, northwest. Lay off 100 fathoms, then bear west, southwest and 100 fathoms more. The chest is buried eight feet. Good luck lad and leave the sea. It is no life for you. J. L. Trinidad.”

Rice is now searching for the woman who gave him the watch. He believes the letter is genuine, and plans to organize an expedition to search for the hidden treasure.