Ah yes, “vari-scenting of mucilage”. Oldest trick in the book. 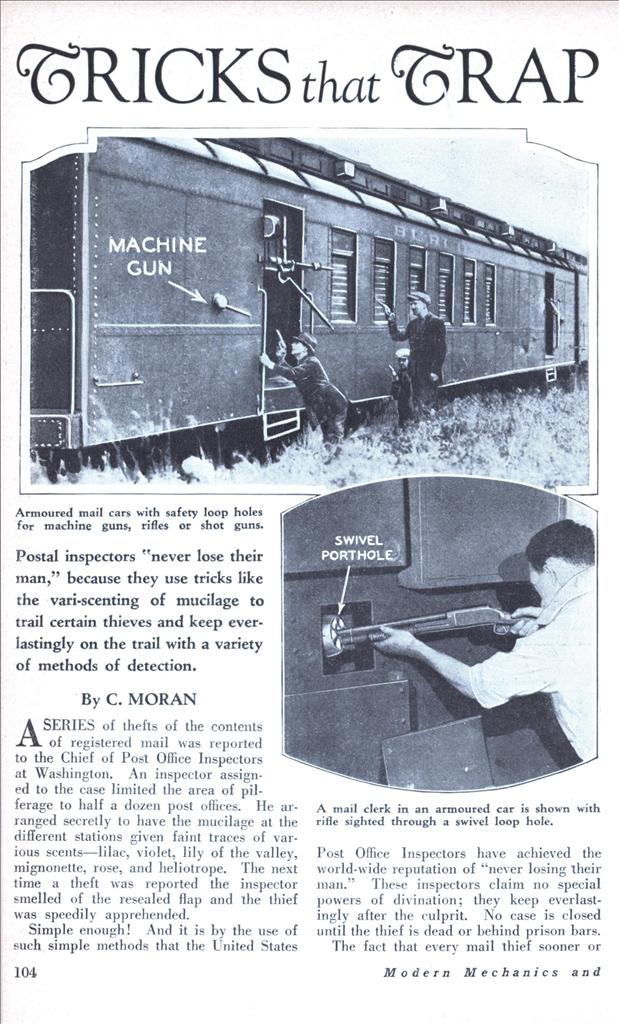 Postal inspectors “never lose their man,” because they use tricks like the vari-scenting of mucilage to trail certain thieves and keep everlastingly on the trail with a variety of methods of detection.

A SERIES of thefts of the contents of registered mail was reported to the Chief of Post Office Inspectors at Washington. An inspector assigned to the case limited the area of pilferage to half a dozen post offices. He arranged secretly to have the mucilage at the different stations given faint traces of various scents—lilac, violet, lily of the valley, mignonette, rose, and heliotrope. The next time a theft was reported the inspector smelled of the resealed flap and the thief was speedily apprehended.

Simple enough! And it is by the use of such simple methods that the United States Post Office Inspectors have achieved the world-wide reputation of “never losing their man.” These inspectors claim no special powers of divination; they keep everlastingly after the culprit. No case is closed until the thief is dead or behind prison bars.

The fact that every mail thief sooner or later must use the mails to correspond with friends or relatives puts the Post Office Department in an especially strategic position to apprehend criminals. Virtually every post office is a detection agency, having been notified of the theft and furnished with a description and photograph of the criminal. One day the thief, about to mail a letter, walks into the arms of a Post Office Inspector. Much of the efficiency of the inspection force is attributed to the fact that the inspectors are recruited from the rank and file of the vast army of postal employes in the approximately 16,000 post offices scattered over the country. Thus, each inspector has an intimate knowledge of the mails and has become a student of human nature through his daily contact with the public. The official inspection staff numbers 535, but practically every man in the postal service is a potential inspector.

Periodically the inspectors are brought to Washington where pending cases are ltviewed and the evidence re-examined for fresh clues. Experiments are conducted with new devices intended to safeguard the mails, as for example the placing of tear gas bombs in post office safes. The bandit is rendered helpless by the gas when the safe is opened. Experiments are made similarly with bullet proof vests for railway mail clerks, armored mail trucks, alarms for post offices, and armored railway cars.

Many mail thieves have been apprehended through clues found in undelivered mail. Thus, an undelivered letter was found to contain five $10,000 bonds that proved to be part of the loot of a mail robbery. The thief was traced through the letter and later sent to jail.

The arrest, conviction and sentence to life imprisonment of the three DeAutremont brothers brought to a successful conclusion what is regarded as the greatest man bunt ever conducted by inspectors of the Post Office Department.

On October 11, 1923, the south bound Southern Pacific passenger train No. 13, was held up in a tunnel just beyond Siskiyou, Oregon. The mail car was dynamited; the mail clerk, engineer, fireman, and brake-man were murdered. Conclusive evidence showed that Roy, Ray and Hugh DeAutremont, three brothers, who lived at Eugene, Oregon, had committed the crime.

Two million five hundred thousand circulars, containing photographs and general description of the trio were sent out by the Post Office Department to every part of the civilized world.

Nearly four years later Hugh DeAutremont was captured in Manila. He had enlisted in the army under an assumed name. Renewed efforts were made to capture the remaining twin brothers, maritime officials in every seaport town being notified to be on the lookout for the criminals.

Four months later the twin brothers were apprehended at Steubenville, Ohio, where they had been working in a steel mill. They had also worked at an automobile factory in Detroit. Following this they had gone to Hanging Rock, Ohio, where they had hoped to lose their identity by having one, Ray, marry a local girl.

The amount of money and securities lost in the mails through the depredations of bandits is infinitesimal compared with the millions upon millions of dollars worth of securities entrusted to the care of the Government in registered packages which are delivered safely. During the war practically $50,000,000,000 worth of Liberty Bonds issued by the Government were carried through the mails without losing one.