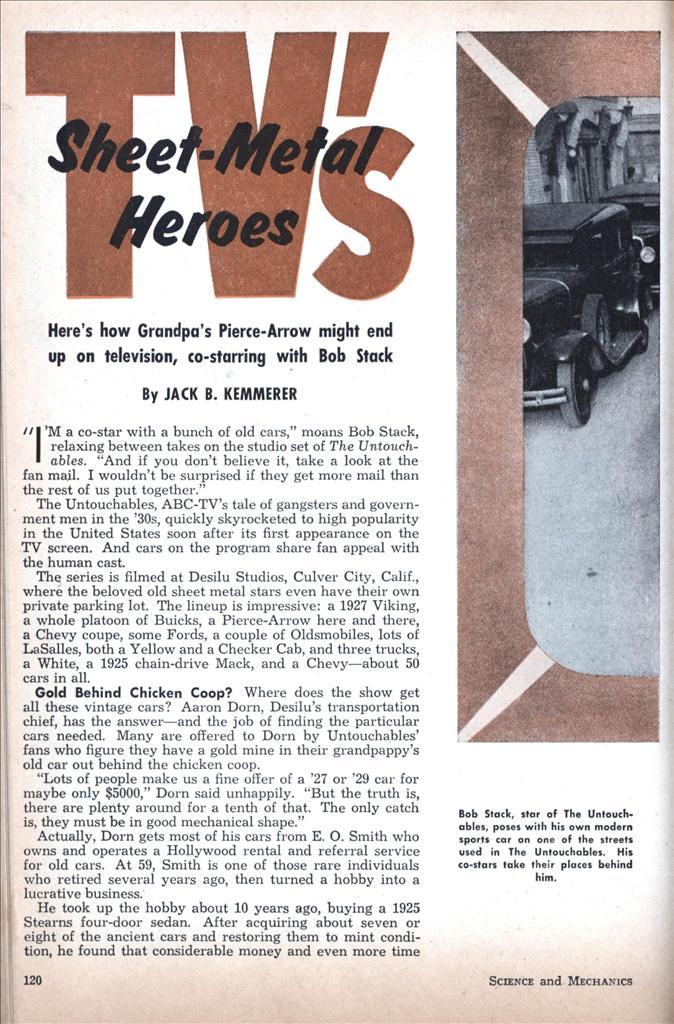 Here’s how Grandpa’s Pierce-Arrow might end up on television, co-starring with Bob Stack

By JACK B. KEMMERER

“I’M a co-star with a bunch of old cars,” moans Bob Stack, I relaxing between takes on the studio set of The Untouch- ables. “And if you don’t believe it, take a look at the fan mail. I wouldn’t be surprised if they get more mail than the rest of us put together.”

The Untouchables, ABC-TV’s tale of gangsters and government men in the ’30s, quickly skyrocketed to high popularity in the United States soon after its first appearance on the TV screen. And cars on the program share fan appeal with the human cast.

The series is filmed at Desilu Studios, Culver City, Calif., where the beloved old sheet metal stars even have their own private parking lot. The lineup is impressive: a 1927 Viking, a whole platoon of Buicks, a Pierce-Arrow here and there, a Chevy coupe, some Fords, a couple of Oldsmobiles, lots of LaSalles, both a Yellow and a Checker Cab, and three trucks, a White, a 1925 chain-drive Mack, and a Chevy—about 50 cars in all.

Gold Behind Chicken Coop? Where does the show get all these vintage cars? Aaron Dorn, Desilu’s transportation chief, has the answer—and the job of finding the particular cars needed. Many are offered to Dorn by Untouchables’ fans who figure they have a gold mine in their grandpappy’s old car out behind the chicken coop.

“Lots of people make us a fine offer of a ’27 or ’29 car for maybe only $5000,” Dorn said unhappily. “But the truth is, there are plenty around for a tenth of that. The only catch is, they must be in good mechanical shape.”

Actually, Dorn gets most of his cars from E.O. Smith who owns and operates a Hollywood rental and referral service for old cars. At 59, Smith is one of those rare individuals who retired several years ago, then turned a hobby into a lucrative business.

He took up the hobby about 10 years ago, buying a 1925 Stearns four-door sedan. After acquiring about seven or eight of the ancient cars and restoring them to mint condition, he found that considerable money and even more time were tied up in something that could only be looked at and driven occasionally.

Cars for Lawless Years. “I knew I had to find some way of making them pay or my hobby was over,” Smith recalls. Some weeks later he heard that M-G-M was looking for cars of the 1920s for a new TV series, The Lawless Years.

Driving one of his cars to the lot, Smith showed it, along with pictures of his other cars, to the transportation chief. Several cars were “signed up” immediately and Smith had a new business. Now, only three years later, he has about 65 vintage cars and is constantly adding more. He supplies cars to every movie studio in Hollywood as well as to television production companies.

Smith belongs to the Antique Car Club and the Horseless Carriage Club; most relics come from members of these two organizations. And, now that he’s well known in the field, Smith gets three or four letters and calls a day from people wanting to unload an old car. “Unfortunately,” he says, “most of these people have an exaggerated idea of what their car is worth.”

Judging the Value. There is no set price for an antique or classic car, according to Smith. It depends entirely on the car’s condition, its rarity, and how bad the would-be purchaser wants it. The least Smith ever paid for a car was $30 for a 1934 Oldsmobile; the most: $1000 each for a 1913 International truck and a 1918 Cadillac. A 1918 Dodge cost him $750 and a 1915 Model T Ford, $900. Each required considerable work to restore; in addition to the time involved, about $500 was spent on each car.

With the exception of major mechanical overhauls, Smith does all restoration work. Body work alone requires about two weeks’ labor and can easily take two months if the car is in really bad shape. He farms out his mechanical work to a neighborhood garage run by another antique car fan who thus has a personal interest in Smith’s problems.

The First Car He Bought (a 1925 Stearns) caused him the most trouble. “It was a case of pure ignorance,” Smith recalls wryly. “If I knew then what I know now, I never would have bought that particular car.”

It was only after a long search for a missing part and much work that he was able to completely restore the Stearns. Later he turned down $1000 for it. He rented it for use in The Lawless Years but now won’t rent it for any price. The make is now quite rare and, while Smith has heard of other Stearns sedans, he has never actually seen one. Those from our century’s “teens” period are valued from $5000 to $7000.

In The Untouchables, Federal Agent Eliot Ness (Bob Stack) uses a 1930 Buick 8 as his personal car. Actually there are two of these Buicks, both identical and both Smith’s. One Buick is used for the destructive scenes where the car gets shot up or wrecked; in one show it was partially burned.

Destructive Scenes Cause plenty of headaches for both Desilu and Smith. They get sacks of mail from angry fans when one of the elderly machines is consumed in a wreck or a fire—the blazing kind or by weapons of the early 1930s.

The wrecks and fires are all real— nothing is faked. If the car is to be totally destroyed, the studio buys it from Smith beforehand. And, naturally, they don’t destroy any of the rare vehicles. “They couldn’t afford to,” Smith grins. “It would cost a lot of money to keep wrecking cars worth four or five thousand dollars.”

When a car is only partially wrecked or burned, Smith is paid for the total damage and he restores it for further use.

Producers of The Untouchables are constantly amazed at the closeness with which its fans watch the show. During one show, some stock footage was used to show a street scene. The film had been checked thoroughly to see that it fits the proper time period. But 2200 letters received the following week disclosed that each viewer writing had spotted the 1941 Pontiac in the 1931 scene.

Death Car for Schultz. Smith has one car, a 1928 Cadillac, that he calls his Dutch Schultz car. Three times by three different studios this vehicle has served as the death car for the Dutchman.

TV commercials offer another source of steady income for Smith. Many of the filmed advertisements require cars of a certain vintage and model. Smith always has four or five of his ancient buggies on loan at the studios that specialize in these short films.

The rental fee per car varies, depending on the vehicle involved, from $30 to $100 a day, with the price increasing with the age and rarity of the vehicle. Most requests are for cars of a particular model and year. Even with 65 on hand, Smith doesn’t have everything the studios want. If he has time, he’ll get the car and restore it, provided enough rental is assured to make it profitable.

“One thing is sure,” Smith says happily. “As long as they make motion pictures and TV films, they’re going to have to have cars of the right age to fit their time requirements. It looks like I’ve got a pretty good hobby.”