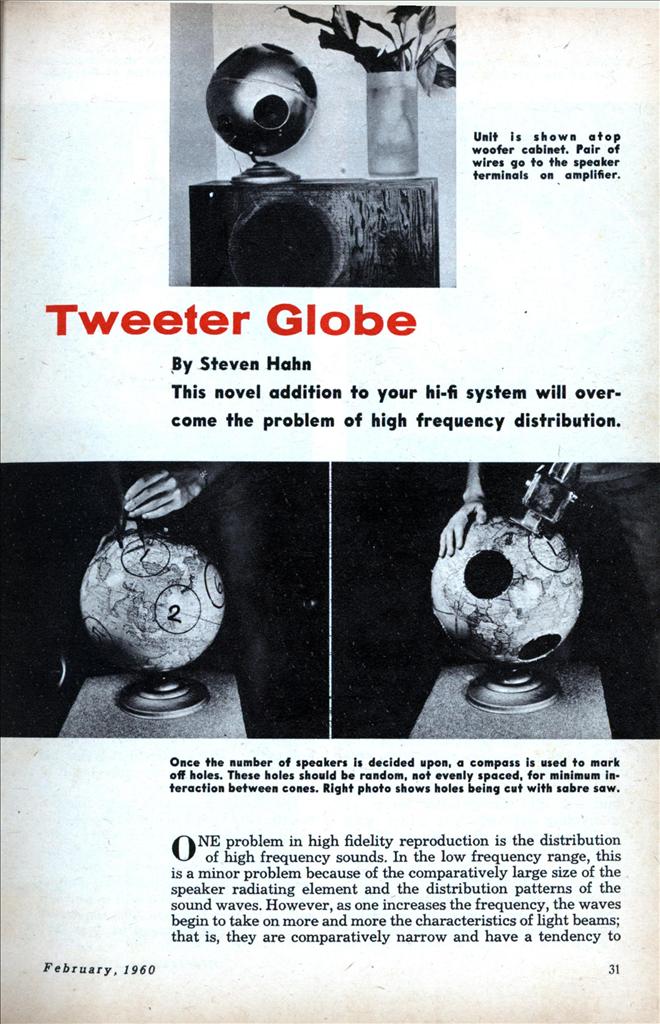 This novel addition to your hi-fi system will overcome the problem of high frequency distribution.

The unit which we have built here can be considered a point source of high frequency sound with even high frequency distribution patterns over the entire listening area. It consists of nine 4″ hard cone tweeters mounted in random positions in a 12″ cardboard ball. An L-pad is added for volume control and a 5 mfd oil capacitor serves as a dividing network. The entire unit, tweeters and all, costs about $35 to build.

Construction The ball in this radiator is actually a cheap 12″ cardboard globe, available from many department stores. The first step is to lay out the tweeter openings on the surface of the cardboard globe. This is done with a compass. After marking the opening, a %” drill is used to drill a hole in the center of each speaker opening. An electric sabre saw with a fine tooth metal cutting blade is then used to cut out the openings. All this work is done with the globe fully assembled on its stand. The tweeter openings can also be cut out with a very sharp razor or modelling knife. In addition to the nine cutouts, a %” hole is drilled near the bottom of the globe to accommodate the L-pad and a smaller hole to take the speaker cable. After this work has been done, the globe is cut in half along the equator.

Sofar as impedance match is concerned, standard formulas for figuring impedance are employed. In this case, some surplus tweeters were used having a voice coil impedance of 3.2 ohms. A set of five and four were connected in series, giving an impedance string of 16 ohms and 12.8 ohms. These two strings were then connected in parallel, resulting in an approximate impedance figure of about 7 ohms. Any set of small cone tweeters will do. A reasonably priced unit is the Jensen P 35 VH ($4.00) or Lafayette SK100 (2 for $5.95—bracket must be removed). Consult the Olson Radio Warehouse or Allied Radio catalogs for others.

After the unit has been assembled and wired, the two halves are put together and the globe is mounted back on its stand. A to 1″ masking tape is used to bind the two halves together. If you desire to paint a new color, save tweeter cutouts to use as masks while painting with one of the popular aerosol