American Magazine
Issue: Oct, 1932
Posted in: Advertisements
Tags: politics
6 Comments on Twenty Cents out of every Dollar of the income of the people is the cost of government in the United States (Oct, 1932)

Twenty Cents out of every Dollar of the income of the people is the cost of government in the United States (Oct, 1932)

I think this is an ad against government spending, but honestly it’s so mild and informative that it’s hard to tell. Whereas today we have crazy ass ads like this one (video) from Herman Cain, who at one point in this election season was the Republican front runner. 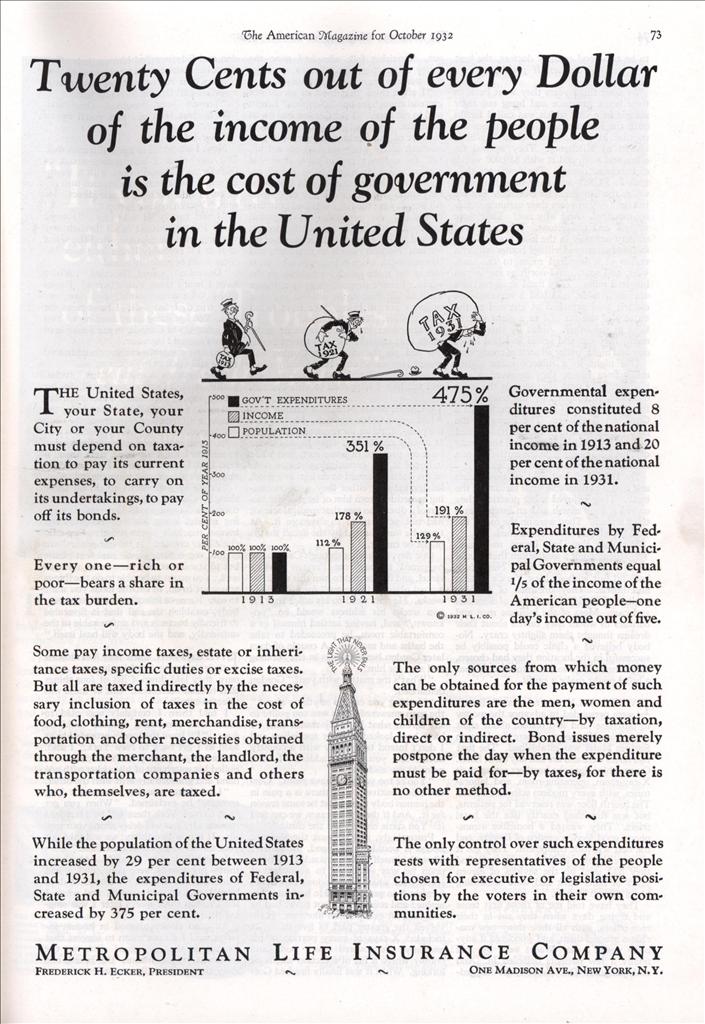 THE United States, your State, your City or your County must depend on taxation to pay its current expenses, to carry on its undertakings, to pay off its bonds.

Every one—rich or poor—bears a share in the tax burden.

Some pay income taxes, estate or inheritance taxes, specific duties or excise taxes. But all are taxed indirectly by the necessary inclusion of taxes in the cost of food, clothing, rent, merchandise, transportation and other necessities obtained through the merchant, the landlord, the transportation companies and others who, themselves, are taxed.

While the population of the United States increased by 29 per cent between 1913 and 1931, the expenditures of Federal, State and Municipal Governments increased by 375 per cent.

The only sources from which money can be obtained for the payment of such expenditures are the men, women and children of the country—by taxation, direct or indirect. Bond issues merely postpone the day when the expenditure must be paid for—by taxes, for there is no other method.

The only control over such expenditures rests with representatives of the people chosen for executive or legislative positions by the voters in their own communities.

Expenditures by Federal, State and Municipal Governments equal 1/5 of the income of the American people—one day’s income out of five.