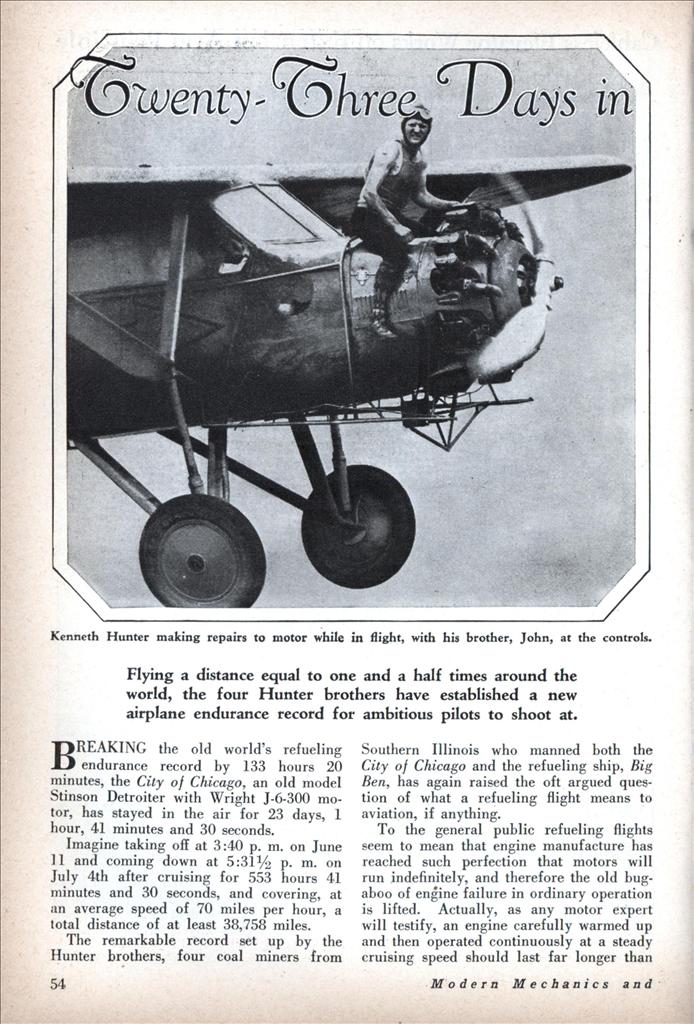 Twenty-Three Days in the Air

Flying a distance equal to one and a half times around the world, the four Hunter brothers have established a new airplane endurance record for ambitious pilots to shoot at.

BREAKING the old world’s refueling endurance record by 133 hours 20 minutes, the City of Chicago, an old model Stinson Detroiter with Wright J-6-300 motor, has stayed in the air for 23 days, 1 hour, 41 minutes and 30 seconds.

The remarkable record set up by the Hunter brothers, four coal miners from Southern Illinois who manned both the City of Chicago and the refueling ship, Big Ben, has again raised the oft argued question of what a refueling flight means to aviation, if anything.

To the general public refueling flights seem to mean that engine manufacture has reached such perfection that motors will run indefinitely, and therefore the old bugaboo of engine failure in ordinary operation is lifted. Actually, as any motor expert will testify, an engine carefully warmed up and then operated continuously at a steady cruising speed should last far longer than one that is warmed up for a short flight, allowed to cool off, warmed up again, then cooled and warmed and so on for many dozens of hops.

What the Hunter flight, and, in fact, all long distance flights, do prove is that plane and engine accessory design has lagged behind the engine design. The Hunters were forced down because of trouble with the oil strainer, the oil line, the oil gauge, and the gasoline tanks. One wing tank, in fact, had been out of commission because of leaks for nearly ten days before the flight ended.

The old Wright J-6 engine was still ticking over when the ship taxied into the hangar after landing. Piston ring wear had progressed to the point where oil consumption was nearly three gallons an hour, yet, if enough oil could have been sent through the engine to protect the bearings there was every evidence the flight might have continued indefinitely.

The leak in the wing tank, first serious trouble to develop, is a trouble that can be avoided, as the army showed some years ago. At McCook field they developed a rubber covered tank, primarily to prevent leakage and fire danger if a machine gun bullet should pierce the tank. A gas container with a rubber cover vulcanized on the outside would be impervious to leaks developing in the metal tank seams. The trouble with the oil lines, gauge and strainer, which finally ended the flight, represents a problem that has been growing more important for several years. The cure, which would not add appreciably to the weight of the ship, would be a dual oiling system, so that one could be cut out of operation for repairs.

The amount of repair work done on the City of Chicago while in flight was considerable. Spark plugs were changed, a magneto overhauled, and even a lost bolt in the engine mount replaced, as well as regular oiling of the rocker arms. For this purpose a light metal cat walk was rigged from the cabin doors to the engine on either side, and Kenneth Hunter, the younger of the four brothers, made regular trips to the motor. He also clambered out of the refueling door in the top of the fuselage and slid back to the tail to clear away string, paper and other debris, blown back during refueling contacts, and threatening to jam the control cables.