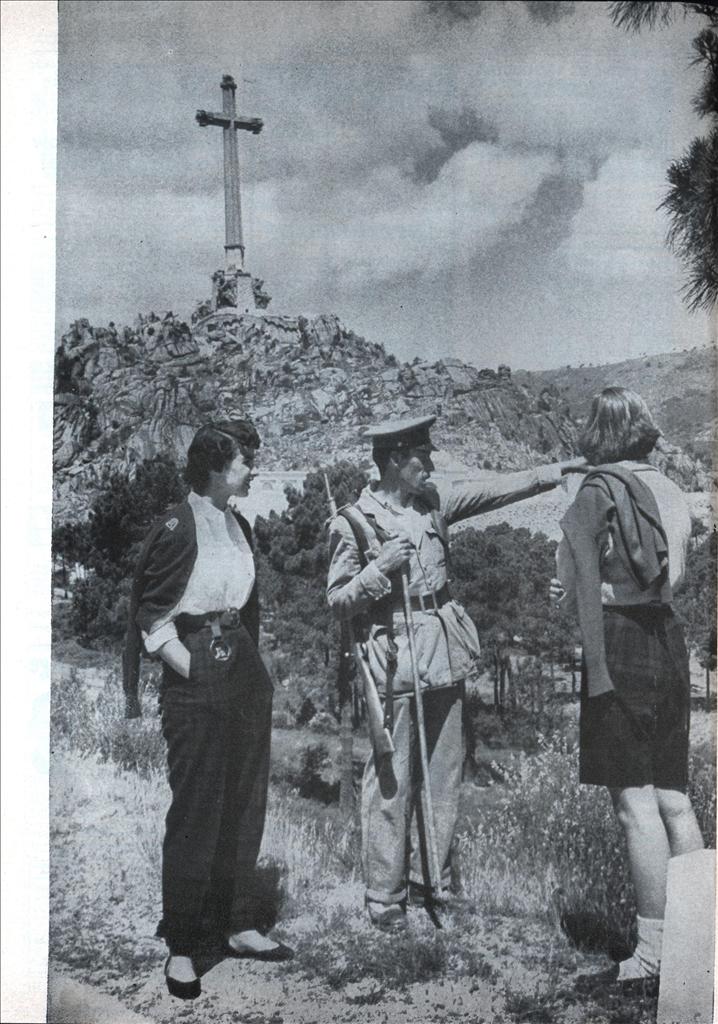 For twenty-year-old Smith College juniors Mariana Moran, of Washington. D.C., and Susan Smith, of Houston. Texas, the New England campus was forgotten in Spain’s sidewalk cafes, in its brilliant sunlight, in the magnificence of Madrid’s famous Prado Museum. As students in good standing and Spanish majors, Susan and Mariana were eligible to spend their junior year abroad, absorbing Spanish culture. This meant learning true Castilian Spanish—spoken with a lisp—all about bullfighting, art. literature, Spanish tradition, how to enjoy horchata (a milklike drink made from almonds), and where to order a perro Caliente (hot dog).

The Spaniards treated the girls with a mixture of friendliness, curiosity, and amusement. Each was quartered with a Madrid family selected by the college, and got a small room, no separate bath. Strict house rules were dictated by the school: only four dates a month for dinner and the evening, and these in a group or with another couple; the rest of the time, home by dinnertime (ten thirty). The school also required twelve hours a week of classes at the University of Madrid, plus two hours of museums a week. On her seventy-dollar-a-month allowance for all expenses —travel, entertainment, necessities, and clothes—Mariana was able to purchase a large wardrobe, dozens of gifts. At year’s end, both girls had learned fluent Spanish, had toured Spain, could explain the difference between an early and a late Goya, and could deal expertly with the flowery piropo (compliment).

ON THE CALLE VICTORIA, in Madrid, Susan and Mariana debate whether to purchase a dollar bullfight seat high in the sol (sunny side of the ring) or a ten-dollar sombra (shady-side) seat up front, compromise on a ringside sol. Both girls fell in love with bullfighting. “Facing a bull,” Susan says, “is like facing a locomotive that can turn like a polo pony.”

AN HOUR FROM MADRID, the girls inspect Valle de los Caidos (Valley of the Fallen), Franco’s personal project. They found this Spanish Civil War cemetery, once forbidden to visitors, an impressive sight. Like all Spaniards, the guard was delighted with their Spanish.

FOR FOUR PESETAS (about ten cents) an hour, Mariana and Susan are taken on an afternoon row in the Parque del Retiro by University of Madrid students Luis Alonzo Alfaro and Alberto Gallego. They met the boys at a party given by a fellow student, think young Spanish boys “have the cultural background of an American professor.” Evening dales begin around seven thirty, usually mean dancing at the Hotel Rex (price: $3.75 for two). Dinner with wine (about $2 for two) follows at ten thirty. Unused to the late dinner hour, the two girls soon learned to stuff themselves before dates with a favorite Spanish snack like gambas (shrimp).

AT MADRID’S PRADO MUSEUM said by some to be more illustrious than Paris’ Louvre, Susan and Mariana came to know intimately the rich paintings of Velasquez, Breughel, Titian, and Rubens. Here they watch an artist copy Goya’s “Maja Clothed.” The Prado—entrance fee: thirteen cents—became the girls’ second home.

ON A WALKING EXCURSION outside the city of Toledo, the girls tired, got a hitch from a friendly Spaniard with a donkey. For two weeks, they toured Castile and southern provinces, studying historical influences on modern Spain.

CARMAELITA, the youngest daughter of Susan’s “family,” teaches her a flamenco dance. The gypsy costume cost $25 to make.

SENORA ROSARIO COPPEL, who was Mariana’s “mother,” teaches her how to wear the, traditional Spanish mantilla.

PENSIVE, the girls look down on a town north of Madrid. At first, the tan-and-orange landscape struck them as harsh, but they came to admire it as “suede, masculine, Spanish earth.” Since Spaniards frown on slacks and shorts, the girls wore them only on country trips. When they were still stared at, they finally gave them up.

AT A SUNDAY-AFTERNOON BULLFIGHT, Susan and Mariana, confirmed aficionadas, chat with Angel Peralta, one of few matadores who fight on horseback.

IN A SMALL VILLAGE between Toledo and Madrid, the girls learn about the people. The woman talking to Mariana is the champion village dancer, mother of six.

TOLEDO’S CATHEDRAL awed the girls, and Mariana concluded, “Going to church here is like visiting a work of art.” Susan added, “Yet religion is as natural to the Spaniards as brushing their teeth.”

MARIANA and Alberto, a medical student, drop into the famous fifteenth-century Cuevas de Luis Candelas, legendary stronghold of a Spanish Robin Hood. A tasca (wineshop) is a conversation spot for everyone, the heart of Spanish life. It fits a student’s budget, too; wine is twenty cents a pitcher.

PROMENADING through the streets (here, in Old Madrid) from eight o’clock till the dinner hour is a popular evening pastime in Spain.

AFTER CLASSES, the girls chat with friends at an outdoor cafe on the main street during the coffee hour—three thirty to four thirty.

ON AVENIDA DE JOSE ANTONIO, Madrid’s main street, the girls are targets for the piropo (compliment). The piropo was often so witty the girls found it hard not to answer with laughter or a humorous reply. Susan’s height, five-feet-seven, almost always drew comments. Embarrassed at first, the girls ducked into cabs—cost per mile: about ten cents, plus a two-cent tip—but later became as impervious to the piropo as Spanish girls.

SUSAN AND MARIANA spend a day at Robledo army camp, where friends Jose Mari Entrecanales and Luis Moratiel put in three summer months as part of the Spanish officers’ training program, similar to the R.O.T.C. For Susan, romance began early in Spain. She met Jose Mari the first week she arrived. Both Jose Mari and Luis are second-year engineering students at the University of Madrid, will end up with better-than-average incomes.

AN ARDENT BULLFIGHTING FAN, Susan knows most of the toreros but has no illusions. “A bullfighter has two qualities—egotism and courage. His conversation is big talk. But though he’s likely to hand out his telephone number to all females won by his egotism, courage is his main characteristic.”

SUSAN GETS EXCITED as Angel Peralta performs on horseback. At her first fight, Susan was shocked at her lack of femininity—she neither fainted nor felt ill.

AT A CLOSE CALL, the girls’ admiration becomes mixed with fear. Here they are embarrassed at having to turn away, but a few seconds later they look back again.

A BAD MOMENT: Susan winces, turns away again. “One bullfight in twenty is beautiful,” she says. “It has to be done artistically, but too often something goes wrong.”

IT GOES WRONG. The bull, hit wide of the mark, spews blood. The girls are sickened but will go again, for next time the bullfight may be “graceful as a ballet.”