Popular Science
Issue: May, 1941
Posted in: Nautical, Origins
2 Comments on U.S. Tries Alaskan Crabbing To Prove It Economical (May, 1941)

U.S. Tries Alaskan Crabbing To Prove It Economical (May, 1941)

And thus “Deadliest Catch” was born. 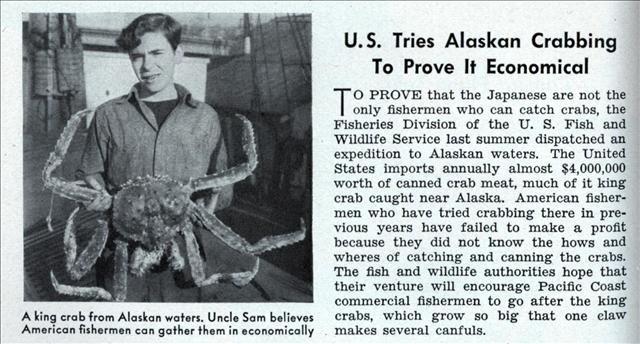 TO PROVE that the Japanese are not the only fishermen who can catch crabs, the Fisheries Division of the U. S. Fish and Wildlife Service last summer dispatched an expedition to Alaskan waters. The United States imports annually almost $4,000,000 worth of canned crab meat, much of it king crab caught near Alaska. American fishermen who have tried crabbing there in previous years have failed to make a profit because they did not know the hows and wheres of catching and canning the crabs. The fish and wildlife authorities hope that their venture will encourage Pacific Coast commercial fishermen to go after the king crabs, which grow so big that one claw makes several canfuls.