Charlie, here is the same scene from the bottom of the page at Google Maps. 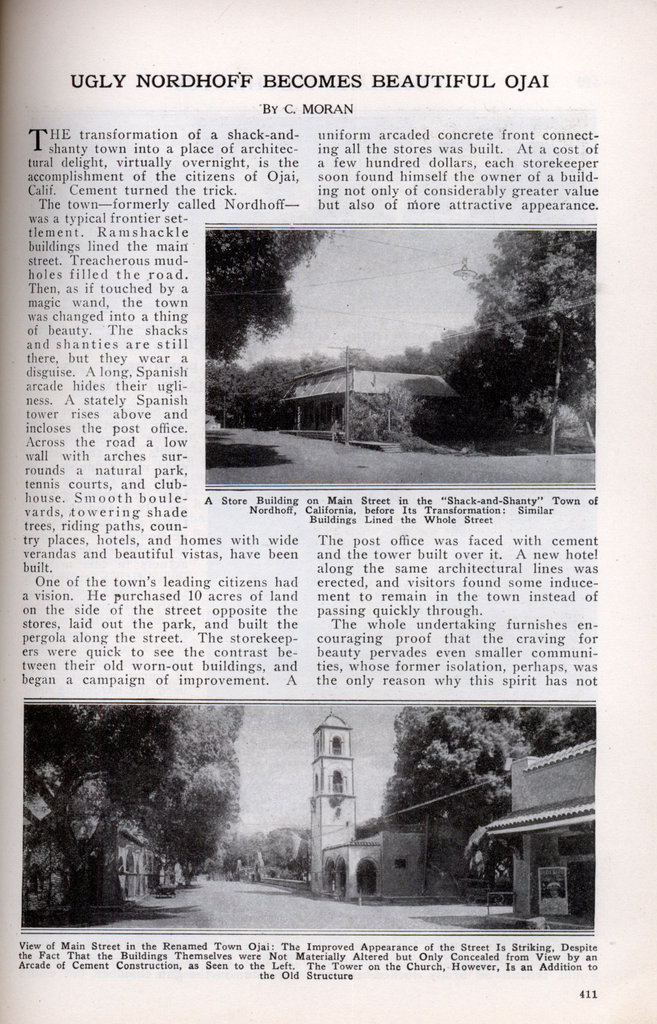 THE transformation of a shack-and-shanty town into a place of architectural delight, virtually overnight, is the accomplishment of the citizens of Ojai, Calif. Cement turned the trick.

The town—formerly called Nordhoff— was a typical frontier settlement. Ramshackle buildings lined the main street. Treacherous mud-holes filled the road. Then, as if touched by a magic wand, the town was changed into a thing of beauty. The shacks and shanties are still there, but they wear a disguise. A long, Spanish arcade hides their ugliness. A stately Spanish tower rises above and incloses the post office. Across the road a low wall with arches surrounds a natural park, tennis courts, and clubhouse. Smooth boulevards, towering shade trees, riding paths, country places, hotels, and homes with wide verandas and beautiful vistas, have been built.

One of the town’s leading citizens had a vision. He purchased 10 acres of land on the side of the street opposite the stores, laid out the park, and built the pergola along the street. The storekeepers were quick to see the contrast between their old worn-out buildings, and began a campaign of improvement. A uniform arcaded concrete front connecting all the stores was built. At a cost of a few hundred dollars, each storekeeper soon found himself the owner of a building not only of considerably greater value but also of more attractive appearance.

The post office was faced with cement and the tower built over it. A new hotel along the same architectural lines was erected, and visitors found some inducement to remain in the town instead of passing quickly through.

The whole undertaking furnishes encouraging proof that the craving for beauty pervades even smaller communities, whose former isolation, perhaps, was the only reason why this spirit has not before expressed itself in visible improvement.

The entire work cost $50,000. Nordhoff was an eyesore; Ojai is a popular resort. Other communities use it as a pattern.