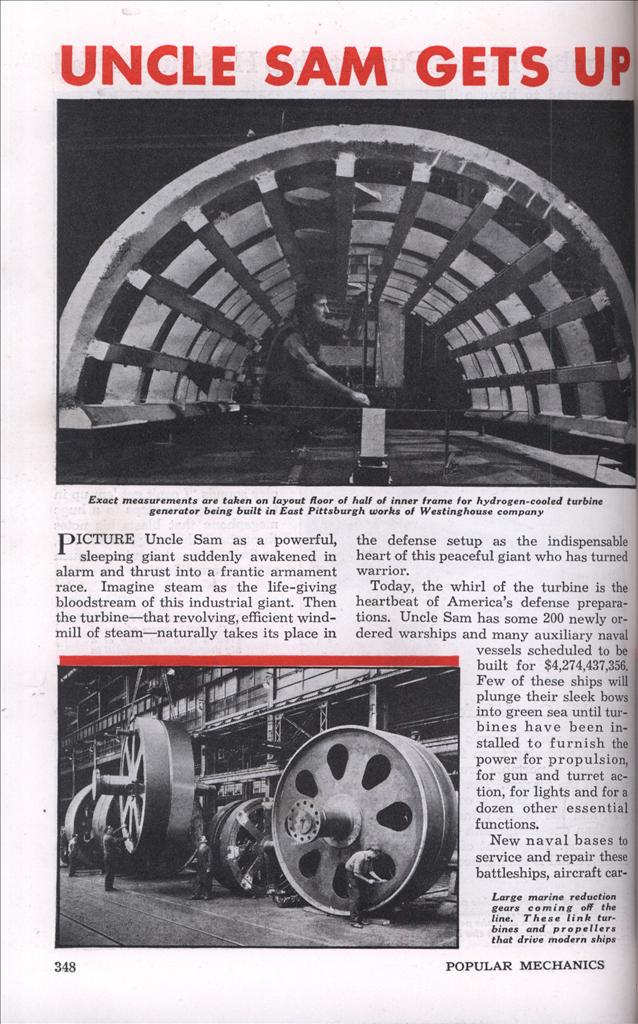 UNCLE SAM GETS UP STEAM

PICTURE Uncle Sam as a powerful, sleeping giant suddenly awakened in alarm and thrust into a frantic armament race. Imagine steam as the life-giving bloodstream of this industrial giant. Then the turbine—that revolving, efficient windmill of steam—naturally takes its place in the defense setup as the indispensable heart of this peaceful giant who has turned warrior.

Today, the whirl of the turbine is the heartbeat of America’s defense preparations. Uncle Sam has some 200 newly ordered warships and many auxiliary naval vessels scheduled to be built for $4,274,437,356. Few of these ships will plunge their sleek bows into green sea until tur-bines have been installed to furnish the power for propulsion, for gun and turret action, for lights and for a dozen other essential functions.

New naval bases to service and repair these battleships, aircraft carriers, cruisers, destroyers, submarines and lesser vessels are being rushed to completion. In many of these bases, not a lathe will turn or a reassuring light glow until turbines have been built and installed.

Hundreds of factories are springing up to construct guns, gun carriages, tanks, trucks, powder, chemicals, ammunition, uniforms and scores of other essentials. Those which depend upon their own production of power from coal, oil or gas, and they are many, will be merely useless buildings until the first jets of steam coursing through turbines touch bright, modern machinery with the magic wand of life. Central power stations, even in the biggest cities, have found that the defense program demand for electricity to empower hundreds of small, urban war-material plants, will require more generators and more turbines.

Forced to wait, in many cases, until turbines have been built for purely military ships and plants, are now on order some 340 cargo vessels, totaling more than 1,700,000 tons, a large proportion of which will be propelled by turbines, their rotating action slowed down to efficient speed by ingenious and precise reduction gears.

When it is considered that it takes from six to eighteen months to make a large-sized turbine for a warship or manufacturing plant and even two years to produce the largest sizes, the important relationship of this mechanism to national safety is startling. And, since there are only five corporations in the country equipped to manufacture large turbines, the turbine industry is just swinging into a stage of intense activity never before seen. Orders on hand total hundreds of millions of dollars.

Typical is the South Philadelphia turbine plant of the Westinghouse Electric and Manufacturing company where a $9,500,000 budget is being expended for machine tools and new buildings to take care of $64,500,000 in orders, including turbines for forty-five battleships, airplane carriers, cruisers and destroyers. A year or so ago this plant was competing for business in a comparatively normal market. Now it has enough turbines on order to tax ordinary capacity for five years. Machinery now ordered will total about 5,000,000 horsepower, of which 3,000,000 will drive navy ships. Steam turbines are put together on assembly lines, much like those of the automobile industry, except that placement of turbine parts is infinitely slower. Minutes in the automobile assembly line are more often weeks in the assembly of a giant turbine.

If you were to spend a year in a turbine plant watching these processes while a single great machine came into being, you would first stay weeks in the calculating, drafting and engineering departments in a disconcerting maze of figures on stresses, weights, temperatures, alloys, speeds, friction, clearances, horsepower, endurance and so on. Paradoxically, you soon would learn that the turbine is one of the simplest of mankind’s important machine-age inventions in spite of all the necessary calculations. In fact, it is only a series of windmills snugly fitted in a metal casing. When steam is forced in at one end, it causes the windmills, or blading, to rotate at tremendous speed. Being attached to a shaft, they cause the shaft to turn. When the shaft is coupled to a generator, electricity is produced. Or, geared down, this shaft supplies power to turn a propeller.

When sheaves of blueprints of your turbine had been dispatched to the various points in the factory where blades would be milled, or extruded through dies or forged, depending on their size, where solid steel shafts weighing up to thirty tons would be turned, where the huge casings, divided into top and bottom sections would be cast, you would follow. And day after day you would watch picked crews of machinists concentrating on single sections. Most interesting, perhaps, would be the days spent watching the blades being fashioned, usually of stainless steel, and so accurately placed that when the turbine parts are expanded by operating temperatures as high as 900 degrees Fahrenheit, clearance would result with minimum escape of steam in the space necessary to keep each blading from striking the surrounding housing. One one-hundredth of an inch is common clearance.

So rugged they can withstand steam pressure of 1,250 pounds per square inch and take the continuous hammering impact of 1,400,000 pounds of steam per hour in a large turbine, often as many as 11,000 blades are installed with watchmaking precision in a single job. The slightest deviation in their relation to each other would result in a screaming complaint from the interior of the turbine when it was placed in service.

You would learn the secret of their efficiency by which these blades have enabled turbines to displace reciprocal steam engines in so many places and turn eight ounces of coal into enough electricity to burn ten 100-watt lamps an hour.

Placed laterally with relation to each other, the blades are so curved that steam, often rushing in a rate of over 600 miles an hour, first pushes the blade and then, passing through, gives it a parting kick, sending it whirling around at a tip speed of 850 miles an hour, sometimes more.

You would notice that bladings vary in size and that when they are connected to the shaft to make a rotor, they often form two groups one in general larger than another. Here you learn another secret of their power, the tandem connection of a high-pressure rotor with a low-pressure rotor which enables some turbines to use the same steam twice and then send it back to the boiler condensed into clean, oil-free water.

Entering the casing, the vapor first speeds through the smaller, high-pressure rotor which in turning cools and expands it. Then it is piped overhead and into the low-pressure rotor where larger blades are able to extract more force from the steam.