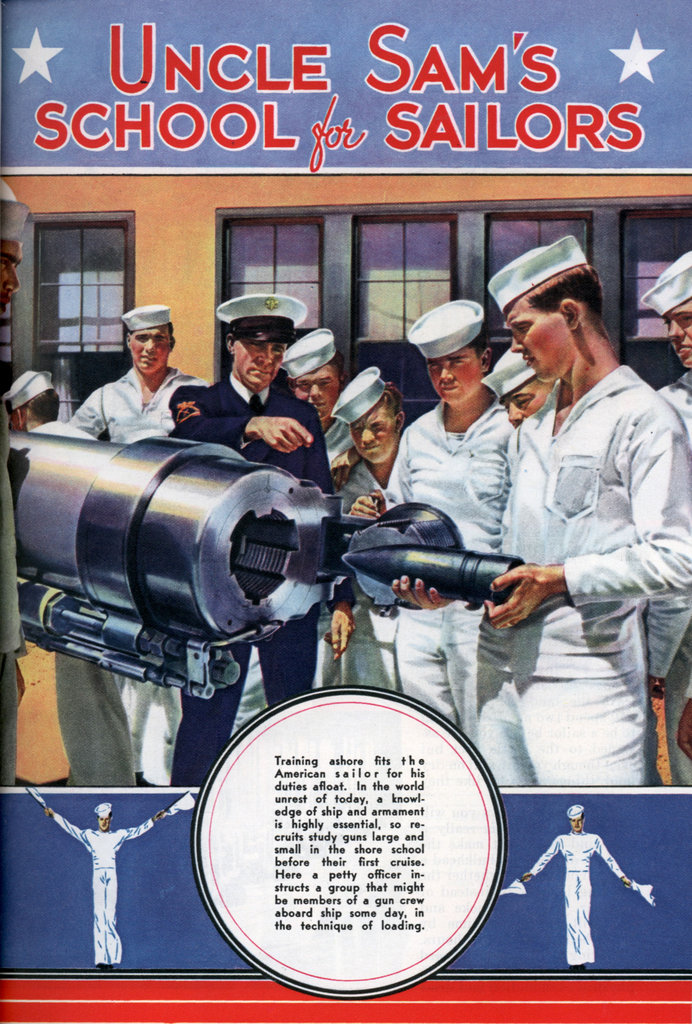 During your first day aboard the station you get a thorough physical examination and draw your uniforms and personal outfit. Your uniforms don’t fit and if you wonder why you’ll be told that you are going to gain from six to ten pounds in the next eight weeks, so the clothes are issued with that in mind.

For the next several weeks you and the rest of your class are kept in quarantine in special barracks while you learn the rudiments of taking care of yourself and your equipment. You have to make your own bed and wash your own clothes and take two showers a day. If you skip the showers some of the gang are apt to give you a sand-and-canvas bath, a hard scrubbing with coarse sand laid on with canvas gloves.

In this period you learn the manual of arms with a Spring-Held and how to march and drill in the new extended order. You are instructed in defense against air attack and you get a dose of gas to prove how well your gas mask works.

Gas instruction is held inside a building that is filled with tear gas. You put on your mask and march inside. In spite of the gas it’s perfectly comfortable if you fitted the mask to your face the way you were told. Later on the gas is blown away and you take the mask off. Then, “accidentally on purpose,” the instructor happens to drop another tear-gas container and you run for the door with smarting eyes, thoroughly convinced of the protection your mask had given.

After the quarantine period you study seamanship. Every recruit has to be on his toes because instruction previously given as a three-months course is now being crammed into two months. The Naval Training Station at San Diego and the training stations at Norfolk, Va., and at Great Lakes Training Station on Lake Michigan are turning out sailors as fast as they can be qualified because the fleet is growing and each ship’s crew must be brought up to full strength.

Your classmates range from eighteen to thirty-one years. Most of them are around twenty-one and most of them have come from the middle west. Like you, they have all signed up for a six-year period.

But recently the Navy lowered its enlistment age to seventeen and these recruits are permitted to sign up for a four year period instead of six with the consent of their parents. If you are ambitious you find that your officers and instructors are anxious to help and that you will be advanced as rapidly as your capabilities warrant. Out of each company of 133 men one honor student is selected for special instruction. Approximately 100 men a year are selected from the fleet to attend the U. S. Naval Academy at Annapolis, Md., and the Navy will send you to a preparatory school to help you quality for the academy if you seem to have the command and leadership possibilities that an officer needs. On the other hand, if you shirk your job as a recruit student some smart instructor is going to put you in command of a company for a few hours. The responsibility of leadership opens the eves of a slack individual and teaches him better than anything else the need for proper training.

When you join the Navy you are surprised at the care with which selections are made. Not every one can join the Navy simply because he wants to and Uncle Sam turns down thirteen or fourteen applicants for every one he selects. You must have high physical, mental, and moral qualifications, the equivalent of a high-school education, letters of recommendation from leaders of your community, no dependents, and no police record. One physical qualification is that you have both of your incisor teeth because sometime you may wish to volunteer for submarine duty, in which case you need both incisors to hold the breathing lung escape mechanism in your mouth. Your schooling and citizenship records are looked into before you are sworn in and you are investigated by the F.B.I.

One reason for this carefulness is that the Navy has no room for dumbbells. Battleships cost about three times as much as they did thirty years ago, mainly because they are now filled with expensive machinery and complex electrical control and firing gear. It takes brains to be a sailor today and nearly every man is trained to be a specialist.

But during your recruit period you receive basic training alone. You must be able to coil a line and tie a knot before you are ready for a class in gyroscopes. Seamanship classes include rowing ship’s boats and heaving the lead. You are surprised to find that there is a knack to heaving the lead that makes a beginner clumsy until he masters it.

You learn to steer a ship while you are still on dry land, learn the compass points and how to use a block and tackle. You receive practical instruction with the real equipment. Such pieces of gear as an engine-room telegraph, a lifeboat in davits, torpedo tubes, naval guns, and searchlights and flag hoists are installed at the station for training.

As the weeks go by you learn the rudiments of radio and how to semaphore with flags. You study gunnery and listen to lectures on torpedoes and bombs. Some of the subjects are taught by motion pictures and you even receive advice on how to spend your pay. You may spend it as you please, of course, but some sailors have been talked into buying more than they could on the installment plan, so the lecture on personal economics is for your own good. The $21 a month that you receive as a recruit doesn’t seem very much but you have no living expenses and your money goes a long way at the ship’s store where you receive a big discount. Your pay goes up to $36 a month when you graduate to seaman second class and every boost in rating from then on brings more money.

Classes and drills keep you busy until 4:30 in the afternoon and then, if you are in the watch that may go ashore, you have liberty to leave the station. Often you eat dinner and attend the free motion pictures instead. It’ it isn’t too dark you are apt to go fishing or swimming or play golf on the station’s course. There are facilities for a number of sports. On Sunday you attend church.

Ordinarily you will go to sea as soon as you receive your recruit graduation diploma. Depending on the needs of the fleet, you will be assigned to any class of ship except submarines. At sea you begin to specialize, selecting deck or engine-room duty and possibly signing up for instruction in Diesels or aviation so that later on you can be sent to one of the advanced schools ashore.

If you are in the top quarter of your graduating class you are considered petty officer material and you may be kept ashore for another sixteen weeks of special schooling instead of going off to sea at once. Your arithmetic, spelling, English, and mechanical aptitude are all considered in your advancement and you have a first and second choice in selecting the instruction you desire. Among other subjects, training is given that fits men as aviation machinists mate, ship fitter, metal smith, and pattern maker. Every sailor learns a trade and there are special schools for musicians, cooks and bakers, radio experts and stenographers, among others. There is even a school for sound motion-picture operators. Movies are exhibited on nearly every ship.

Young men join the Navy for adventure and security. They obtain both because they see the world and at the same time learn a trade that qualifies them for good jobs if they reenter civilian life. If they remain in the Navy they retire on half pay at the end of twenty years duty.