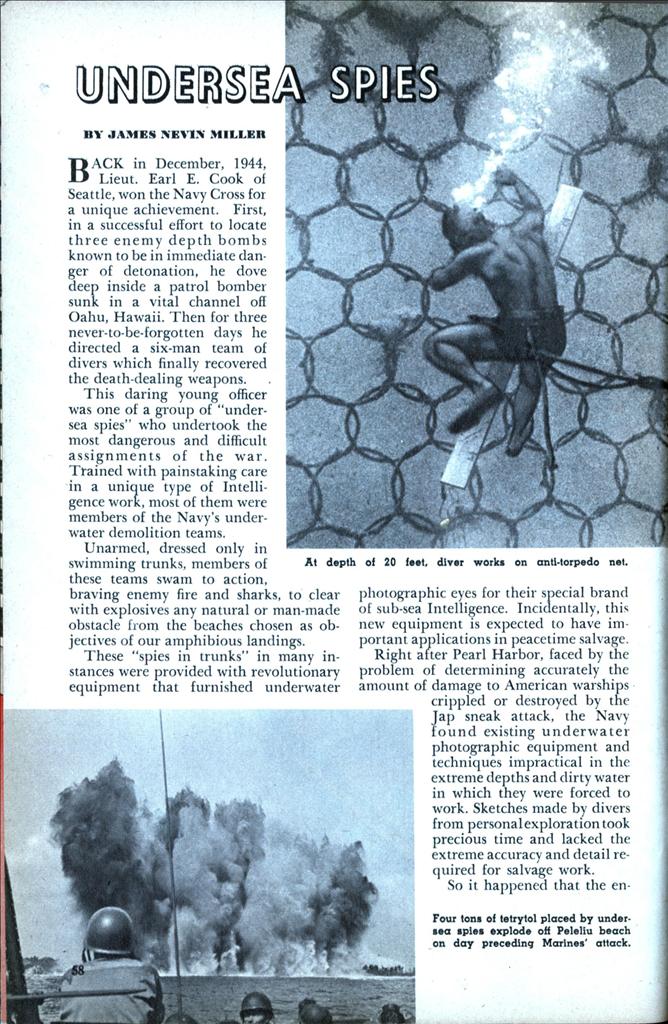 BACK in December, 1944, Lieut. Earl E. Cook of Seattle, won the Navy Cross for a unique achievement. First, in a successful effort to locate three enemy depth bombs known to be in immediate danger of detonation, he dove deep inside a patrol bomber sunk in a vital channel off Oahu, Hawaii. Then for three never-to-be-forgotten days he directed a six-man team of divers which finally recovered the death-dealing weapons.

This daring young officer was one of a group of “undersea spies” who undertook the most dangerous and difficult assignments of the war. Trained with painstaking care in a unique type of Intelligence work, most of them were members of the Navy’s underwater demolition teams.

Unarmed, dressed only in swimming trunks, members of these teams swam to action, braving enemy fire and sharks, to clear with explosives any natural or man-made obstacle from the beaches chosen as objectives of our amphibious landings.

These “spies in trunks” in many instances were provided with revolutionary equipment that furnished underwater photographic eyes for their special brand of sub-sea Intelligence. Incidentally, this new equipment is expected to have important applications in peacetime salvage. Right after Pearl Harbor, faced by the problem of determining accurately the amount of damage to American warships crippled or destroyed by the Jap sneak attack, the Navy found existing underwater photographic equipment and techniques impractical in the extreme depths and dirty water in which they were forced to work. Sketches made by divers from personal exploration took precious time and lacked the extreme accuracy and detail required for salvage work. So it happened that the en- gineers of Photo Utilities, Inc., in cooperation with the Navy, developed an electrically-operated multiple exposure camera capable of withstanding pressures at depths up to 225 feet. In this connection they used the automatic motor and film transport mechanism manufactured by Graflex, Inc., the 90 mm. wide-angle Graflex Optar lens in the Graflex synchronized shutter originally designed for Speed Graphic press cameras, and a special aluminum pressure case with pressure type controls for lens diaphragm and shutter. The camera, using only standard film, filters and flashbulbs, can be operated from the surface by remote control, yet it is compact enough to be carried and operated by a single diver.

Because of the extreme murkiness of choppy waters and great depths, most undersea photographic work requires from one to four standard size flashbulbs. Special waterproof socket reflectors developed by the Mines Equipment Co., prevent the danger of short circuits and make it possible to change bulbs under water. In crystal-clear areas of the Pacific however, standard snapshot exposures are possible at depths as great as 100 feet.

Extreme depth of field and focusing from two feet to infinity are possible with a helical mount which moves the film toward and away from the lens instead of the opposite standard procedure.

A dome-shaped aluminum pressure case protects the camera from damage by water or pressure. For the first time in undersea equipment, the curved protecting glass over the lens forms an integral part of the optical system, providing critical definition under all conditions. Special waterproof compartments within the camera prevent total damage in case of accident to one or more sections.

Getting back to the exploits of the “underwater spies”: exactly how they were able to invade enemy beachheads to pave the way for landings in force probably never will be told in its entirety. This much, however, may now be revealed: They were the first ashore and al- ways faced the risk of heavy casualties. In fact, their losses in Normandy were as high as 40 per cent.

Yet their work was vital to the success of our landing operations. They cleared enemy beaches of obstructions. They blasted ways through reefs so landing ships might enter. Their sacrifices helped to keep down the casualties among the soldiers who arrived on the succession of D-Days in the Pacific, invariably days after the sub-sea Intelligence experts had done their work.

The first training school for underwater demolition teams was organized by Commander Draper L. Kauffman of Bethesda, Md. He and his daring associates went through a big part of the Pacific war. * “Every time our men went in,” he said, “they expected to suffer heavy casualties. After one or two operations we felt certain that the Jap would take steps to prevent our accomplishing future jobs other than by simply shooting at us. We expected to be blown sky high by mines waiting for our swimmers and to find other traps specifically designed to stop us when the teams left their boats and swam in to carry out reconnaissance and demolition of obstructions. These the Jap failed to do and contented himself with plastering us with cannon, rifle and machine gun fire. We didn’t want to emphasize his mistakes.”

In open daylight jobs destroyers and converted destroyers, cruisers and even battleships, along with bombing and strafing planes, kept the enemy at bay while our underwater experts worked around reefs and along the beaches.

The value of the sub-sea spies was twofold. They obtained information as to whether mines and obstacles lay in the way of a planned landing operation, and they eliminated obstructions wherever necessary.

Their attire was simple—swimming trunks, light swimming shoes sometimes fitted with a fin to speed up swimming, and large goggles for working under water. Their tools, besides the sub-sea camera, were explosives and fuses and gear for securing them into position.

Their mother ships were converted destroyers which carried smaller landing craft for transporting personnel when close to the reefs. From here on in, small rubber boats and swimming were the only means of transportation.

Underwater spying had to be rapid and sure. Often on exposed reefs where a man was too clearly a target, the demolition men had to work for short periods when tides partially or fully covered the reefs. Early in the work our officers and men learned that it was very difficult for the enemy to hit a human head bobbing in the water. Normally the demolition men laid their high explosives, connected by cords of instantaneous explosive material, around a large group of obstacles to be blown out. When the safety fuse was touched off, the whole area of obstacles went up together. Synchronized watches and radio contact were used among the platoons or groups of men to assure that explosives were not touched off prematurely. On pre-arranged signal, all swimmers would get out of the area of danger as fast as they could to their rubber boats, thence to landing craft to escape the deluge of flying coral, concrete, steel and broken timbers.

They not only blew up these obstructions but often cut channels through the reefs so that the larger landing craft could bring men and tanks to the chosen beaches. Time after time secret reconnaissance was required at selected landing beaches without leaving a trace that the beaches had been visited.