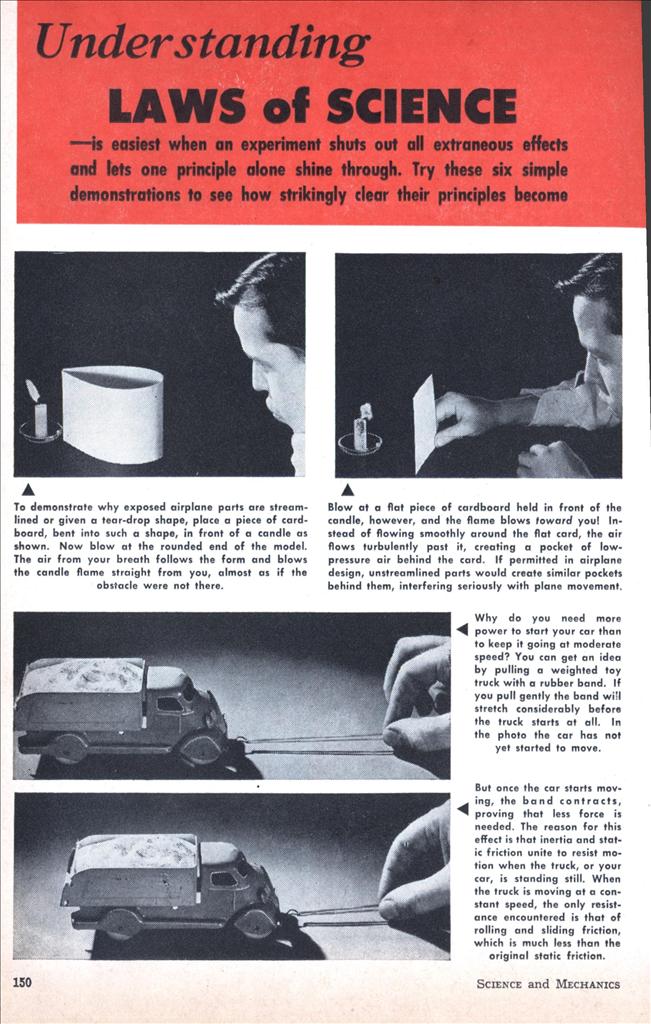 —is easiest when an experiment shuts out all extraneous effects and lets one principle alone shine through. Try these six simple demonstrations to see how strikingly clear their principles become To demonstrate why exposed airplane parts are streamlined or given a tear-drop shape, place a piece of cardboard, bent into such a shape, in front of a candle as shown. Now blow at the rounded end of the model. The air from your breath follows the form and blows the candle flame straight from you, almost as if the obstacle were not there.

Blow at a flat piece of cardboard held in front of the candle, however, and the flame blows toward you! Instead of flowing smoothly around the flat card, the air flows turbulently past it, creating a pocket of low-pressure air behind the card. If permitted in airplane design, unstreamlined parts would create similar pockets behind them, interfering seriously with plane movement.

Why do you need more power to start your car than to keep it going at moderate speed? You can get an idea by pulling a weighted toy truck with a rubber band. If you pull gently the band will stretch considerably before the truck starts at all. In the photo the car has not yet started to move.

But once the car starts moving, the band contracts, proving that less force is needed. The reason for this effect is that inertia and static friction unite to resist motion when the truck, or your car, is standing still. When the truck is moving at a constant speed, the only resistance encountered is that of rolling and sliding friction, which is much less than the original static friction.

By suspending two metal plates at opposite sides in a glass of water and connecting them in series with a small electric light bulb and several dry cells, you can readily divide all water-soluble substances into electrolytes and non-electrolytes —substances that form solutions that conduct electricity and those that do not. Add sugar to the water, for instance, and the light does not glow, indicating that sugar is a non-electrolyte.

Add salt to the water, however, and the bulb glows brightly, proving that a salt solution is an electrolyte. You can test other substances similarly. Substances which form electrolytes break up into ions when dissolved in water. It is these ions that carry the electric current.

Because of surface tension, liquid bodies freed of all distorting forces tend to become spherical—a sphere having the smallest surface for a given volume. You can demonstrate this by floating drops of cooking oil in an alcohol-water mixture. Using a flat-sided bottle, fill it two-thirds full of rubbing alcohol and into this put a few drops of the oil. Slowly add water until the drops descend part way into the mixture. To prove the drops will remain spherical regardless of size, enlarge some by injecting more oil into them with a medicine dropper.

Can you fill this modernized version of the Cup of Tantalus? Legend has it that this cup suddenly emptied itself just before reaching the parched lips of the king for whom it was named. Bend a glass or plastic tube in the shape of a question mark, as shown. Then slip a short piece of rubber tubing on the bottom end and press the rubber into the stem of the funnel. The funnel will now hold water until it rises to the top of the bent tube. At this point, siphon action starts and the water drains out. Consequently, if you pour slowly enough, the funnel will never fill up.

You can easily demonstrate the curious fact that heat waves from the Sun, from electric light bulbs, and from other bodies at extremely high temperatures can pass readily through glass, while waves from less highly heated bodies, such as radiators and electric irons, can do so only with difficulty. Set up two sheets of glass as illustrated. Facing one sheet, place an electric iron; facing the other, an electric light bulb. If you now put your hand between the sheets, you can instantly note the difference. The side of your hand facing the light bulb will feel much warmer than the side facing the iron, although the latter is actually giving off a great deal more heat.