The caption is funny too: “Z. Wiggs out for a spin in his pooch-mobile. “
The guy’s name is Z. Wiggs, but when I read it I thought the dog’s name was Z and he was wigging out for a ride. I like my interpretation better. 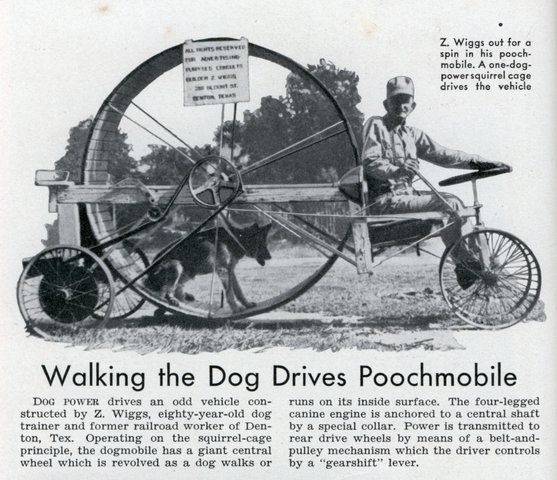 Walking the Dog Drives Poochmobile
DOG power drives an odd vehicle constructed by Z. Wiggs, eighty-year-old dog trainer and former railroad worker of Denton, Tex. Operating on the squirrel-cage principle, the dogmobile has a giant central wheel which is revolved as a dog walks or
runs on its inside surface. The four-legged canine engine is anchored to a central shaft by a special collar. Power is transmitted to rear drive wheels by means of a belt-and-pulley mechanism which the driver controls by a “gearshift” lever.