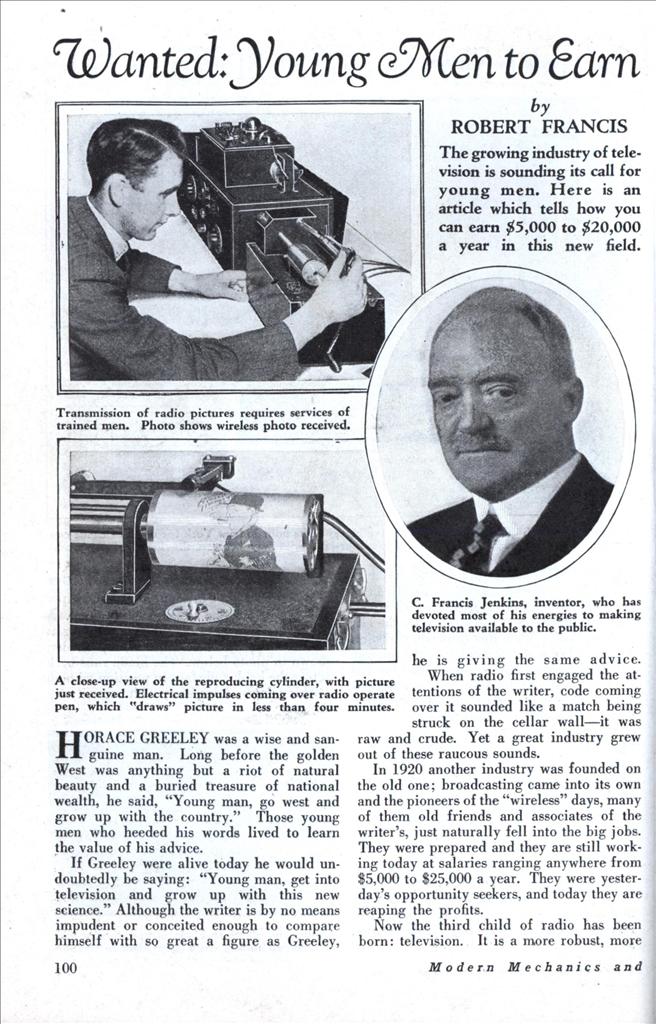 The growing industry of television is sounding its call for young men. Here is an article which tells how you can earn $5,000 to $20,000 a year in this new field.

HORACE GREELEY was a wise and sanguine man. Long before the golden West was anything but a riot of natural beauty and a buried treasure of national wealth, he said, “Young man, go west and grow up with the country.” Those young men who heeded his words lived to learn the value of his advice.

If Greeley were alive today he would undoubtedly be saying: “Young man, get into television and grow up with this new science.” Although the writer is by no means impudent or conceited enough to compare himself with so great a figure as Greeley, he is giving the same advice.

When radio first engaged the attentions of the writer, code coming over it sounded like a match being struck on the cellar wall—it was raw and crude. Yet a great industry grew out of these raucous sounds.

In 1920 another industry was founded on the old one; broadcasting came into its own and the pioneers of the “wireless” days, many of them old friends and associates of the writer’s, just naturally fell into the big jobs. They were prepared and they are still working today at salaries ranging anywhere from $5,000 to $25,000 a year. They were yesterday’s opportunity seekers, and today they are reaping the profits.

Now the third child of radio has been born: television. It is a more robust, more promising infant than the other two. It is making bigger promises, it foreshadows still greater things because it appeals to a more important human sense, the sense of sight. We depend upon our eyes far more than we depend upon our ears and the writer dares to predict that this fact will make television a billion dollar industry within the next ten years. Indeed he is glad that he is alive and in a position to urge young men to cast their lot with an industry that has such an almost indescribably beautiful, romantic and fascinating future.

It is strange that so many people believe that television is coming and so few KNOW THAT IT IS HERE. Already young men are receiving as high as $10,000 a year designing and perfecting television equipment. As young as the science is, we already have no less than eight television stations supplying regular programs. The $250,000,000 Radio City which is being built in New York City will alone have seven television studios that will be in operation in a little over two years. Strange that so many people only think that television is on the way. Young men who think the same way will wake up one day to find that many of the really big opportuni- ties have slipped through their fingers.

One might think that a device capable of transmitting living images over the ether would of necessity be a most complicated and inextricable piece of mechanism. Indeed, the writer has talked to several young men who have thought that television was utterly beyond their intelligence. They insisted upon believing that such a wondrous result could be brought about only by a mechanism so intricate and delicate as to defy the average intelligence. Nothing could be farther from the truth. Television equipment, contrary to current popular opinion, is amazingly simple and its principles are just as easy to learn as are the principles of radio or mechanical engineering.

Television will need practically the same complement of men as does broadcasting. It will have to have first its technicians, who will be, by far and wide, the most important part of the personnel. It will be these men who will not only design the necessary equipment, but who will supervise its operation as well.

Naturally the full-fledged designing engineer will be a high salaried man capable of earning from $.5,000 to $20,000 a year depending upon the corporation he is working for and his responsibilities. He shall have to have a firm foundation in radio engineering, he shall have to know photo-electricity and have a rather sound knowledge of optics as well. Not only this, but he shall have to have expert knowledge of sound broadcasting, too, for our television images of the immediate future will talk to us. This is quite a large order indeed but not so large when one thinks of the size of the reward in store for the men who can successfully meet the requirements. Such men will sit upon the thrones of the new industry.

Next in importance, we come to the operating engineers—the men who will keep the television wheels turning free from the proverbial monkey-wrenches. Salaries in this work will range from $2,500 to $8,000 a year, depending largely upon the size and importance of the stations being attended. Of course, there will be a chief operating engineer as well as several assistants in each transmitter. The salaries for assistants may run anywhere between $2,000 and $5,000 per year. There will also be the usual staff in the studio and a studio director whose job it will be to co-ordinate the various departments.

The greatest opportunities in this new work will come no doubt in the manufacturing of television receiving equipment. Here there will be a crying need for designing engineers, plant engineers, inspectors, research physicists, assistant engineers and foremen. As a matter of fact, it must be admitted that the field of transmission, although lucrative, will be more or less limited, and that the larger opportunities will lie in the actual production of receiving equipment, for America will eventually need over 15,000,000 pieces of receivers.

A few days before the writer prepared this manuscript for Modern Mechanics and Inventions, he talked to a very successful young radio service man who was quite thrilled over the fact that he had just made his first call to service a television receiver owned by a prominent banker in town. Although he got five dollars for the call, this did not impress him half as much as the fact that it was his first experience, and, incidentally, an experience that he had prepared for by actual study. “Someday,” he said, “I’ll be making nothing but television calls.”

He was right and he was sensible enough to be preparing himself now. Although he is now making on the average of $4,000 a year, he will be able to double that amount within the next few years, for the radio television service man is going to be very much in demand. When a radio receiver goes “hay-wire” today, people are very anxious to get their “radio hearing” hack, but wait until they lose their “radio seeing!”

The “loudspeaker” in a television receiver will take the form of a tube, the light from which can be modulated by the impulses making up the picture. This tube or lamp will depend for its operation upon the discharge of electricity through certain gases like neon or better yet, argon. An ordinary electric light cannot be used because it is far too sluggish in its action and too much current is necessary. Then, too, we must look forward to the day when television receivers will be operated by cathode ray tubes and the successful development of such an instrument lies entirely in the hands of men who understand the discharge of electricity through gases. Even today there is a million dollars waiting for anybody who can turn this trick.

The optical expert is very badly needed in television today. The engineers who are struggling with the new problems of this infant science, lean heavily upon men who have mastered the science of optics. The services of men who have specialized in this work will be in great demand for many years to come.

Within a few years time, television cameras will be used to cover national events just as today such events are covered by sound microphones and announcers. That will mean plenty of travel for the men whose job it will be to take care of the portable equipment. It will not only mean travel but big pay as well for these men will be extremely important, inasmuch as program success or failure shall lie largely in their hands.

And so runs the story of television so full of promise and reward for those who will prepare for its fascinating opportunities now.