Be sure to check out the awesome cover of this magazine. 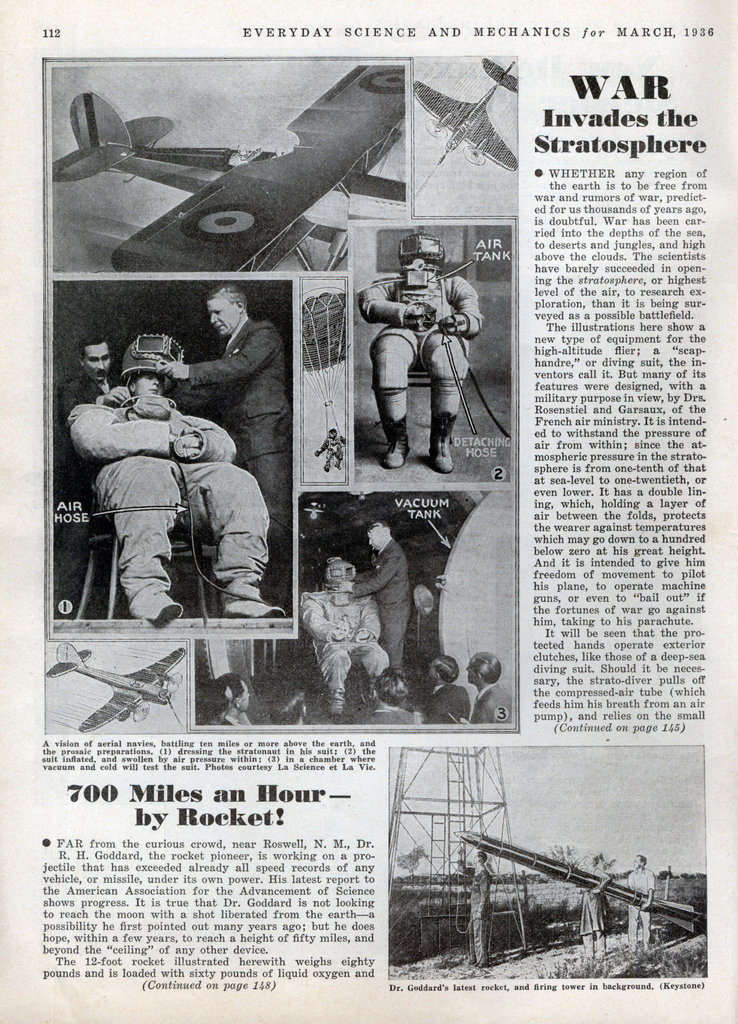 WHETHER any region of the earth is to be free from war and rumors of war, predicted for us thousands of years ago, is doubtful. War has been carried into the depths of the sea, to deserts and jungles, and high above the clouds. The scientists have barely succeeded in opening the stratosphere, or highest level of the air, to research exploration, than it is being surveyed as a possible battlefield.

The illustrations here show a new type of equipment for the high-altitude flier; a “scap-handre,” or diving suit, the inventors call it. But many of its features were designed, with a military purpose in view, by Drs, Rosenstiel and Garsaux, of the French air ministry. It is intended to withstand the pressure of air from within; since the atmospheric pressure in the stratosphere is from one-tenth of that at sea-level to one-twentieth, or even lower. It has a double lining, which, holding a layer of air between the folds, protects the wearer against temperatures which may go down to a hundred below zero at his great height. And it is intended to give him freedom of movement to pilot his plane, to operate machine guns, or even to “bail out” if the fortunes of war go against him, taking to his parachute.

It will be seen that the protected hands operate exterior clutches, like those of a deep-sea diving suit. Should it be necessary, the strato-diver pulls off the compressed-air tube (which feeds him his breath from an air pump), and relies on the small tank of compressed air which he bears on his breastâ€”as in photo 2. Tubes with interchangeable nipples will run to posts about the plane which the aviators may be called upon to occupy.

Another feature of the doubling of the thickness of the suit, including that of its windows, is that it not only protects the wearer from cold, but prevents the accumulation of blinding condensed frost. He is, as it were, in a thermos bottle.