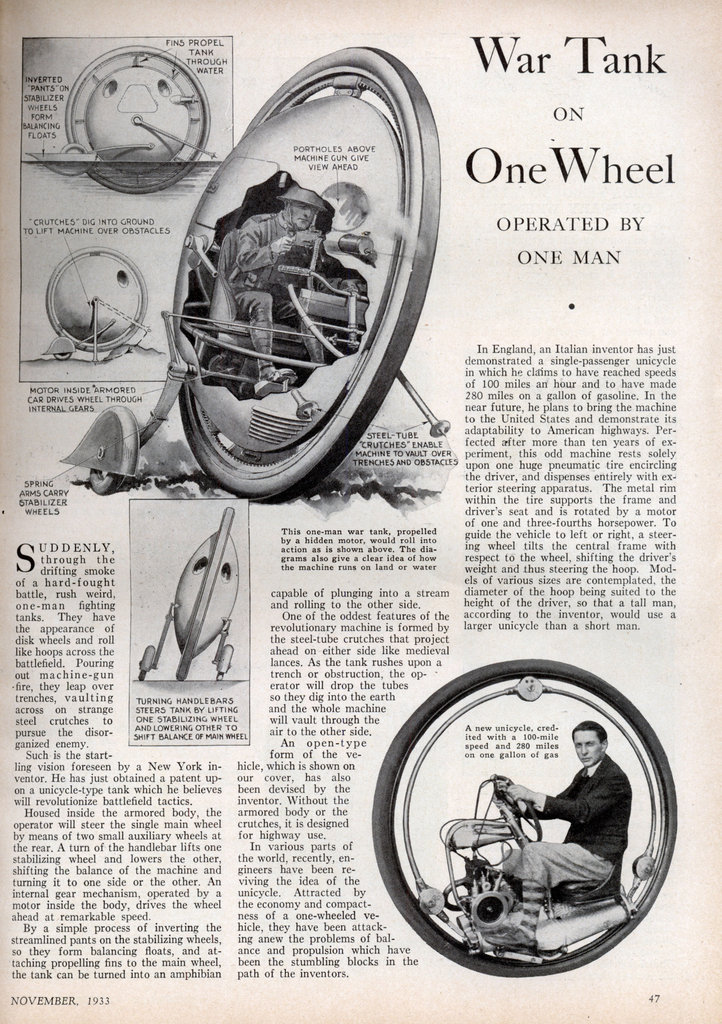 War Tank on One Wheel OPERATED BY ONE MAN

SUDDENLY, through the drifting smoke of a hard-fought battle, rush weird, one-man fighting tanks. They have the appearance of disk wheels and roll like hoops across the battlefield. Pouring out machine-gun fire, they leap over trenches, vaulting across on strange steel crutches to pursue the disorganized enemy.

Such is the startling vision foreseen by a New York inventor. He has just obtained a patent upon a unicycle-type tank which he believes will revolutionize battlefield tactics.

Housed inside the armored body, the operator will steer the single main wheel by means of two small auxiliary wheels at the rear. A turn of the handlebar lifts one stabilizing wheel and lowers the other, shifting the balance of the machine and turning it to one side or the other. An internal gear mechanism, operated by a motor inside the body, drives the wheel ahead at remarkable speed.

By a simple process of inverting the streamlined pants on the stabilizing wheels, so they form balancing floats, and attaching propelling fins to the main wheel, the tank can be turned into an amphibian capable of plunging into a stream and rolling to the other side.

One of the oddest features of the revolutionary machine is formed by the steel-tube crutches that project ahead on either side like medieval lances. As the tank rushes upon a trench or obstruction, the operator will drop the tubes so they dig into the earth and the whole machine will vault through the air to the other side. An open-type form of the vehicle, which is shown on our cover, has also been devised by the inventor. Without the armored body or the crutches, it is designed for highway use.

In various parts of the world, recently, engineers have been reviving the idea of the unicycle. Attracted by the economy and compactness of a one-wheeled vehicle, they have been attacking anew the problems of balance and propulsion which have been the stumbling blocks in the path of the inventors.

In England, an Italian inventor has just demonstrated a single-passenger unicycle in which he claims to have reached speeds of 100 miles an hour and to have made 280 miles on a gallon of gasoline. In the near future, he plans to bring the machine to the United States and demonstrate its adaptability to American highways. Perfected after more than ten years of experiment, this odd machine rests solely upon one huge pneumatic tire encircling the driver, and dispenses entirely with exterior steering apparatus. The metal rim within the tire supports the frame and driver’s seat and is rotated by a motor of one and three-fourths horsepower. To guide the vehicle to left or right, a steering wheel tilts the central frame with respect to the wheel, shifting the driver’s weight and thus steering the hoop. Models of various sizes are contemplated, the diameter of the hoop being suited to the height of the driver, so that a tall man, according to the inventor, would use a larger unicycle than a short man.