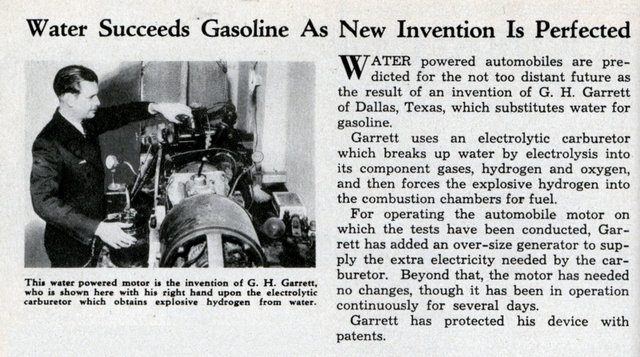 WATER powered automobiles are predicted for the not too distant future as the result of an invention of G. H. Garrett of Dallas, Texas, which substitutes water for gasoline.

Garrett uses an electrolytic carburetor which breaks up water by electrolysis into its component gases, hydrogen and oxygen, and then forces the explosive hydrogen into the combustion chambers for fuel.

For operating the automobile motor on which the tests have been conducted, Garrett has added an over-size generator to supply the extra electricity needed by the carburetor. Beyond that, the motor has needed no changes, though it has been in operation continuously for several days.

Garrett has protected his device with patents.