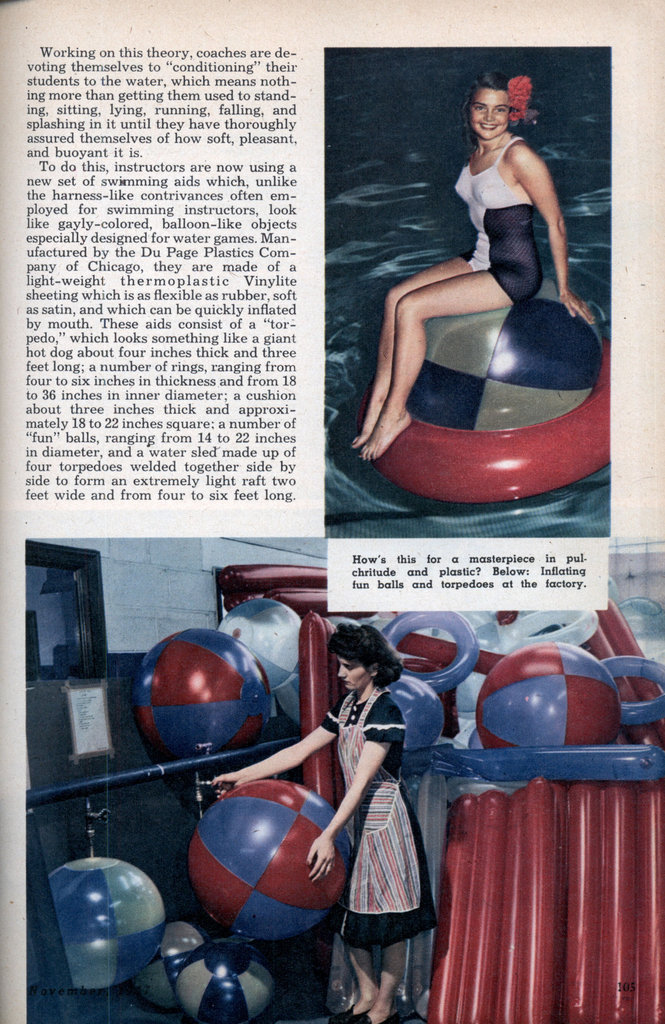 The old-fashioned water harness has been outmoded by gayly colored swimming aids.

A MAN, a boy, and a girl walk to the edge of a swimming pool, dive into the water, swim the full 75-foot length of the pool, climb out at the other end, and briskly follow each other off the three-foot-high springboard, each slicing into the water in a dive which cuts the surface like a knife.

What’s so remarkable about this?

Nothing except that the man is a war veteran whose entire right arm and lower left leg are missing, the girl is a tiny tot who is not quite four years old, the boy is a 10-year-old who has been a victim of severe spastic paralysis since he was a baby. And until three weeks before not one of these people had ever swum a stroke in his life.

What is perhaps even more remarkable, however, is that as swimming students impeded by critical handicaps, yet well on their way to becoming strong, confident swimmers, these three people are the product of a new method of instruction whichâ€”believe it or notâ€”is now successfully proving that the very best way to begin teaching a child or adult to swim is simply not to teach him at all.

The number one problem is to get rid of that awesome fear of the water which our parents and teachers so thoroughly and diligently drilled into us as children. Most instructors now agree that, far from being the mysterious and hard-to-learn art so many people believe it to be, swimming is basically an instinctive ability which should come to every human as naturally and easily as crawling does to a baby or walking does to a small child.

Working on this theory, coaches are devoting themselves to “conditioning” their students to the water, which means nothing more than getting them used to standing, sitting, lying, running, falling, and splashing in it until they have thoroughly assured themselves of how soft, pleasant, and buoyant it is.

To do this, instructors are now using a new set of swimming aids which, unlike the harness-like contrivances often employed for swimming instructors, look like gayly-colored, balloon-like objects especially designed for water games. Manufactured by the Du Page Plastics Company of Chicago, they are made of a light-weight thermoplastic Vinylite sheeting which is as flexible as rubber, soft as satin, and which can be quickly inflated by mouth. These aids consist of a “torpedo,” which looks something like a giant hot dog about four inches thick and three feet long; a number of rings, ranging from four to six inches in thickness and from 18 to 36 inches in inner diameter; a cushion about three inches thick and approximately 18 to 22 inches square; a number of “fun” balls, ranging from 14 to 22 inches in diameter, and a water sled made up of four torpedoes welded together side by side to form an extremely light raft two feet wide and from four to six feet long.

One of the most enthusiastic users of the new swimming aids is Lester J. Kelly, swimming coach at the famous Laboratory School of the University of Chicago, and for 25 years one of the most progressive swimming instructors in the country. Whether working with children or adults, Kelly uses the aids in any number of interesting ways.

One of the simplest is to place one of the smaller inflated rings under a student’s . armpits and then let him wade into the water. Because of its position, the ring will hold the student’s head and shoulders well out of the water and will give him an assured sense of support while he kicks his feet and does either a dog-paddle or breaststroke with his hands. Or one of the cushions can be tied to his stomach and he can flop down in the water and begin to work his arms and legs.

As the student’s confidence grows, the cushion can be tied to his back so that his body is lower in the water and in a more natural swimming position, while at the same time being strongly buoyed up. Or he can straddle a “torpedo,” with its ends popping up in front and behind him so that he rides it like a hobby horse, and pulls himself through the water by kicking his legs and paddling with his hands on either side. Or he can lie face-down on one of the two-foot-wide sleds, work his feet in the conventional flutter-kick and move his hands at the sides in the regular overhand stroke.

One of the great values of these aids, especially of the ring, cushion, and torpedo, is that they can be gradually deflated in inverse ratio to the student’s increasing confidence and ability to support himself in the water. The trick, of course, is not to call this gradual deflation to the student’s attention, but merely to let him discover for himself one day that it is by his own entirely unaided efforts that he is supporting himself in the water and pulling himself through it.

Another enthusiastic endorser of these aids is Adolph Kiefer, 1936 Olympic champion, and still the holder of practically every world’s record in the backstroke. Kiefer spends much of his time traveling around to various swimming pools, demonstrating plastic aids for use not only with beginning swimmers but also for perfecting the form of high school and collegiate competitive swimmers.