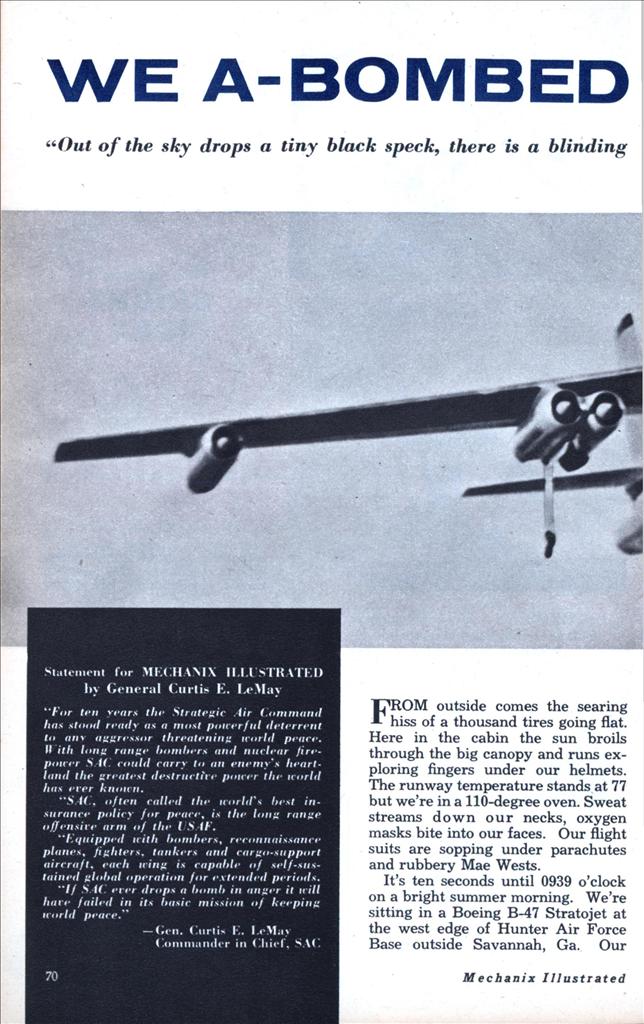 “If SAC ever drops a bomb in anger it will have failed in its basic mission of keeping world peace.”

FROM outside comes the searing hiss of a thousand tires going flat. Here in the cabin the sun broils through the big canopy and runs exploring fingers under our helmets. The runway temperature stands at 77 but we’re in a 110-degree oven. Sweat streams down our necks, oxygen masks bite into our faces. Our flight suits are sopping under parachutes and rubbery Mae Wests.

It’s ten seconds until 0939 o’clock on a bright summer morning. We’re sitting in a Boeing B-47 Stratojet at the west edge of Hunter Air Force Base outside Savannah, Ga. Our plane, its six jet engines idling, points down an 11,000-ft. runway.

“Coming up on 30 seconds to take-off.” The radar observer’s voice booms through our spongy earphones. “Now.” The rush of air picks up volume, the big bomber shifts uneasily.

Our watches tick toward 0940. The commander rams forward on six blue-knobbed throttles until the hiss turns to a fiery whine and then rumbles into the heavy, explosive blast of mammoth power.

The straining plane lurches forward, shudders, settles down. For 150 feet we gain momentum slowly, until suddenly she is lunging down the concrete strip as if propelled by a dynamite blast. Our airspeed races to 70 knots, spirals on toward 150. The wheels lift a few inches.

“Gear up,” shouts the commander. “Flaps up.”

Two giant double trucks disappear into the belly, the doors slam shut and the B-47 is a trim silver dart shooting toward the morning sun.

“Gear and flaps up and off.”

We’re spinning along at three miles a minute just above the ground, the nose held level to pick up speed. The indicator whirls to 200, then 250 and races on. The control column comes back, our nose lifts sharply and we’re in a steep climbout. A tight bank makes Savannah a checkerboard below the left wing.

At a mile up we brush through scattered clouds. The bomber is climbing easily under full power. A banshee shriek trails out behind us but in the cabin there is the sound of a hurricane pulling at a house, plus a hum and click from electronic apparatus.

The mission has begun. Two hundred and twenty-five miles away lies Atlanta, a rich metropolis of almost 500,000. Our mission: destroy it.

Our plane, AF-56, is from the 308th Bomb Wing. On its nose rides the mailed-fist-and-lightning of the Strategic Air Command.

Like all of SAC’s crack bomb crews, the men at the controls of AF-56 are veteran fliers with plenty of hours in their logs. Back in 1954 these three teamed up in a gruelling 25-hour mission that covered 10,000 miles to win the Mackay Trophy. The crew: Aircraft Commander—Maj. Glen W. Stockton, 31, St. Joseph, Mo., married, three children, a 13-year Air Force veteran.

Bert Bernhoff sits far down in the nose amid a room full of whirring gismos that make him the eyes and ears of the ship. He tells us where we are, where we are going, when we will get there. As observer-bombardier, he’s the guy who actually puts the bomb on the target—and he’s also navigator.

In the front of the canopy, high above Bert, rides Glen Stockton, his fingers fiddling gently with the wheels of the automatic pilot while his right hand adjusts throttles, pushes and pulls on massed ranks of buttons and knobs. Glen is the quarterback who calls signals and makes the decisions.

Just behind him sits Jack Terpening, an experienced pilot ready to take over the controls. By way of keeping busy he also serves as co-navigator, flight engineer, radio officer and triggerman on those twin 20mm guns sticking out of the tail.

Glen sizes up his instrument panel. “Altitude 10,000 feet, cabin pressurization 4,500 feet, crew oxygen check.” On his left leg is strapped a notebook resembling a secretary’s thick pad, except the 35 pages are plastic windows and inside are check lists, front and back.

Although the flight began at 0940, this checking and double-checking seems to have been going on forever and it will continue after we land. Take-off was still two hours away when the crew rolled out to our 47, lined up on the hard-stand with almost 50 sister ships. Crawling up through the hatch, we had pre-flight to test every one of the ship’s systems. After we fired up and went trundling toward the runway there were more check-lists: “Right turn . . . check.” The plane swerves right.

On and on it goes, usually with one man questioning another on equipment in his area. During a six-hour mission about an hour and 15 minutes of inflight time is spent on check lists.

Bert squints into his radar scope and twirls knobs swiftly. “Coming up on Macon. We’ll be over it in three minutes.” Macon is 160 air miles from Savannah; we’re already halfway across Georgia.

The sun is unmercifully bright up here, six and a half miles high, and it almost blinds us. The sky overhead has become purple.

Hot air pours out of our air conditioning-heating system, which likes to spit ice on the ground. With that heat, plus the sun, we’re perspiring freely in our light flying suits but in the nose Bert wears heavy boots and a leather jacket to keep warm. The plane’s skin down there will turn your hand numb with its 25-below deep-freeze. This is a little problem still unsolved—the two men topside can be fried to a turn while the observer starts to petrify.

Ours is a relaxed crew; they know what they’re doing and don’t worry. Their intercom talk is cryptic but not rushed.

Bert, a short, good-natured gent, comes in: “Macon under our right wing.”

Down through holes in the thin white clouds we see the tiny squares of Macon. Running alongside is the Ocmulgee River, a winding thread of silver. Rivers and lakes are mirrors laid out on the landscape; land is dark brown or black.

“Correct heading to 260,” the observer orders. We bank left and head away from Atlanta, preparing for the run. Glen— tall, slender and quiet-spoken—pilots this flying brain almost offhand. He holds the wheel lightly with his left hand and reads check lists. He adjusts three knobs, pushes a button, flips two switches.

LaGrange (pop. 25,000) is 61 miles southwest of Atlanta. It will be our Initial Point (IP), where we’ll line up on the bomb run and start synchronization. The 030 heading will take us into Atlanta from the southwest, heading 30 points east of due north.

It’s 1131. Glen brings her around in a slow turn that covers 28 miles. We’re barreling along so fast that a slight twist on the wheel brings the plane over in a sharp bank.

Bert tunes up the K-System, the Air Force’s deadly day-or-night, fair-weather-or-foul bombsight. The System’s computers do almost all the brainwork for the observer, telling him where he is, where the target is and how far and how fast he’ll have to fly to get there. But it must be fed the information it digests; From dials and gauges Bert reads our true airspeed, our altitude, etc., and gives the figures to his clicking bank of computers. Once set, the machines keep turning to give an up-to-the-second picture.

Our run today will be visual. Bert is to go in close on radar, then switch to the mammoth telescopic bombsight sticking out of the nose to pick out the target. It will be difficult because of clouds.

“We’re at the IP,” Bert announces, and almost before we realize it AF-56 is streaking down the bomb run at close to 500 mph. Bert watches his scope while his hands jump from knob to knob. He switches to the telescope. We go into the final check list: Commander: Offset switch?

Obs.: 25 miles, center PDI and give me second station.

Obs.: Roger, I have the aircraft, automatic.

We’re 25 miles out and control passes to Bert and the K-System. He holds the scope crosshairs on target and the equipment does the rest, computing drift and time and keeping us on course and altitude.

The Stratojet moves along at better than seven miles a minute. At our speed and altitude our bomb load will be dropped a good many miles this side of the target. The K-System will be flying us for a little over two minutes.

The time-to-go indicator clicks toward zero.

We’re just passing over College Park on the outskirts of Atlanta. We do a sharp right turn and run for home, never having passed over the target.

If the mission were for real—not a practice run—the bomb would now be hurtling downward toward the heart of Atlanta, falling flat at first. Then the nose would drop. Far below, the noon hour has come. Businessmen and clerks and secretaries pour out of office buildings for lunch, laughing and talking in the sunshine.

Out of the sky drops a tiny black speck. There is a blinding white flash and a shock wave crushes outward, smashing everything in its path. Heat waves melt the steel in buildings and a white mushroom forms in the sky.

Atlanta, unprepared for attack, lies in fire and smoke and ruin. Complete destruction runs more than a mile from ground zero. In our area of destruction, says Elliott R. Jackson, director of Atlanta Civil Defense, would have been some 475,000 persons. Now 221,000 lie dead and 79,000 are injured. Complete destruction covers a circle 36 blocks across and damage does not disappear for nearly six miles. Our one bomb has virtually wiped out the city from Wesley Road on the north to Mt. Zion Road on the South.

AF-56 wings out over the Atlantic and circles toward Hunter, sinking slowly past 30,000 feet. Our object is to get on the ground as fast as possible. Glen makes a hard left bank and drops her nose. We watch the airspeed indicator climb past 600 mph and toward the red cut-off line. At 20,000 Jack drops the landing gear for drag, and we begin shucking off altitude even faster. We’re shoved into our seats by the tight turn. In less than three minutes AF-56 levels out at 1,500 feet and Jack opens the drag ‘chute.

It’s a bright, almost clear day now, but we’ll do an instrument approach. The Ground Control Approach unit has us on radar, is giving instructions. But, true to every procedure, we don’t sit back and wait for GCA to bring us in. Bert has the runway on his scope and is watching to see that GCA gives the right directions.

We touch down easily, the brake chute billows and we coast to a stop. Glen taxies to our parking spot. Heat waves roll up around us as we climb down the ladder. It is 1530 hours. The flight lasted five hours and 50 minutes, a relatively short mission.

We’re pulling off the Mae Wests, helmets, oxygen masks and parachutes when the report comes from Atlanta that our bomb was on target.

“I knew we had it,” Bert says, grinning. “All you have to do is feed this monster right and you hit the target every time. Sounds like a real easy job. But it isn’t.”