This is a pretty well reasoned piece, though it would have been so much better if the last line had been: “Ergo, Godzilla”. 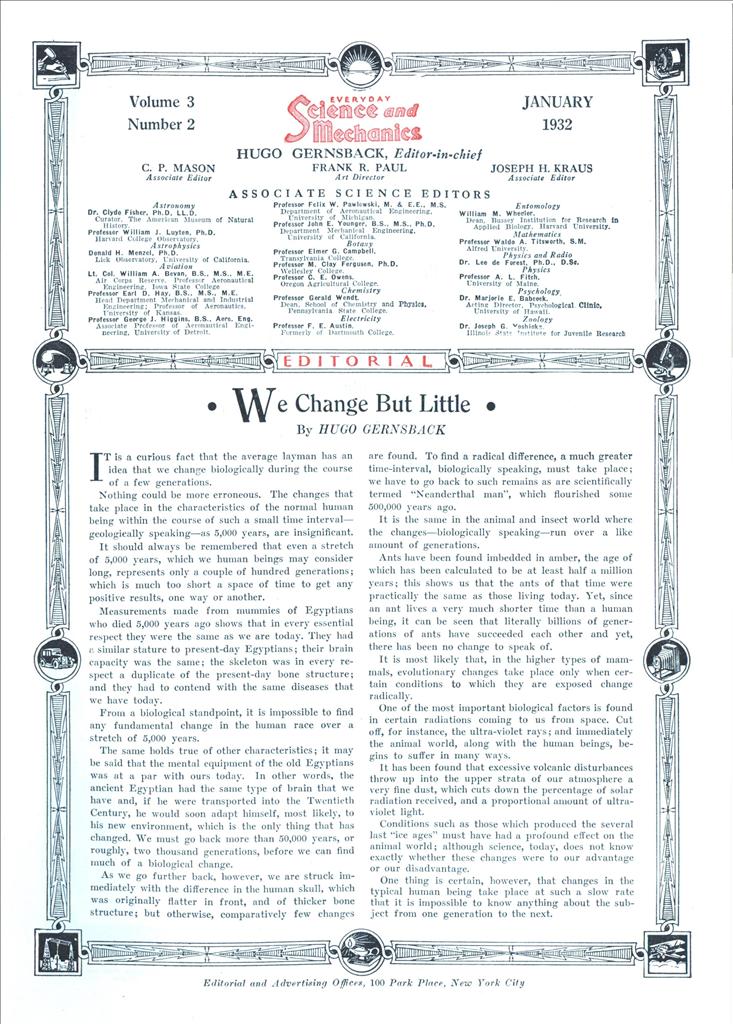 We Change But Little

IT is a curious fact that the average layman has an idea that we change biologically during the course of a few generations.

Nothing could be more erroneous. The changes that take place in the characteristics of the normal human being within the course of such a small time interval— geologically speaking—as 5,000 years, are insignificant.

It should always be remembered that even a stretch of 5,000 years, which we human beings may consider long, represents only a couple of hundred generations; which is much too short a space of time to get any positive results, one way or another.

Measurements made from mummies of Egyptians who died 5,000 years ago shows that in every essential respect they were the same as we are today. They had ;>. similar stature to present-day Egyptians; their brain capacity was the same; the skeleton was in every respect a duplicate of the present-day bone structure; and they had to contend with the same diseases that we have today.

From a biological standpoint, it is impossible to find any fundamental change in the human race over a stretch of 5,000 years.

The same holds true of other characteristics; it may be said that the mental equipment of the old Egyptians was at a par with ours today. In other words, the ancient Egyptian had the same type of brain that we have and, if he were transported into the Twentieth Century, he would soon adapt himself, most likely, to his new environment, which is the only thing that has changed. We must go back more than 50,000 years, or roughly, two thousand generations, before we can find much of a biological change.

As we go further back, however, we are struck immediately with the difference in the human skull, which was originally flatter in front, and of thicker bone structure; but otherwise, comparatively few changes are found. To find a radical difference, a much greater time-interval, biologically speaking, must take place; we have to go back to such remains as are scientifically termed “Neanderthal man”, which flourished some 500,000 years ago.

It is the same in the animal and insect world where the changes—biologically speaking—run over a like amount of generations.

Ants have been found imbedded in amber, the age of which has been calculated to be at least half a million years; this shows us that the ants of that time were practically the same as those living today. Yet, since an ant lives a very much shorter time than a human being, it can be seen that literally billions of generations of ants have succeeded each other and yet, there has been no change to speak of.

It is most likely that, in the higher types of mammals, evolutionary changes take place only when certain conditions to which they are exposed change radically.

One of the most important biological factors is found in certain radiations coming to us from space. Cut off, for instance, the ultra-violet rays; and immediately the animal world, along with the human beings, begins to suffer in many ways.

It has been found that excessive volcanic disturbances throw up into the upper strata of our atmosphere a very fine dust, which cuts down the percentage of solar radiation received, and a proportional amount of ultraviolet light.

Conditions such as those which produced the several last “ice ages” must have had a profound effect on the animal world; although science, today, does not know exactly whether these changes were to our advantage or our disadvantage.

One thing is certain, however, that changes in the typical human being take place at such a slow rate that it is impossible to know anything about the subject from one generation to the next.