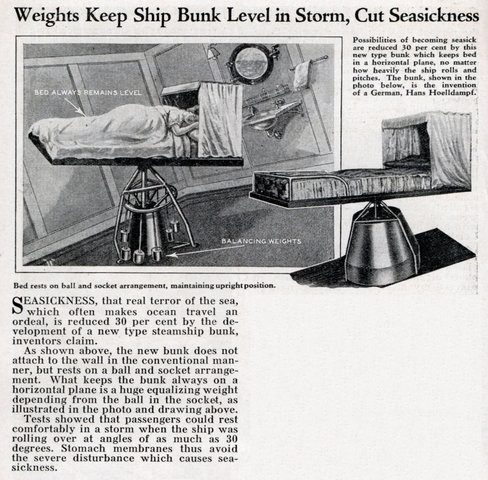 Weights Keep Ship Bunk Level in Storm, Cut Seasickness
SEASICKNESS, that real terror of the sea, which often makes ocean travel an ordeal, is reduced 30 per cent by the development of a new type steamship bunk, inventors claim.

As shown above, the new bunk does not attach to the wall in the conventional manner, but rests on a ball and socket arrangement. What keeps the bunk always on a horizontal plane is a huge equalizing weight depending from the ball in the socket, as illustrated in the photo and drawing above.

Tests showed that passengers could rest comfortably in a storm when the ship was rolling over at angles of as much as 30 degrees. Stomach membranes thus avoid the severe disturbance which causes seasickness.