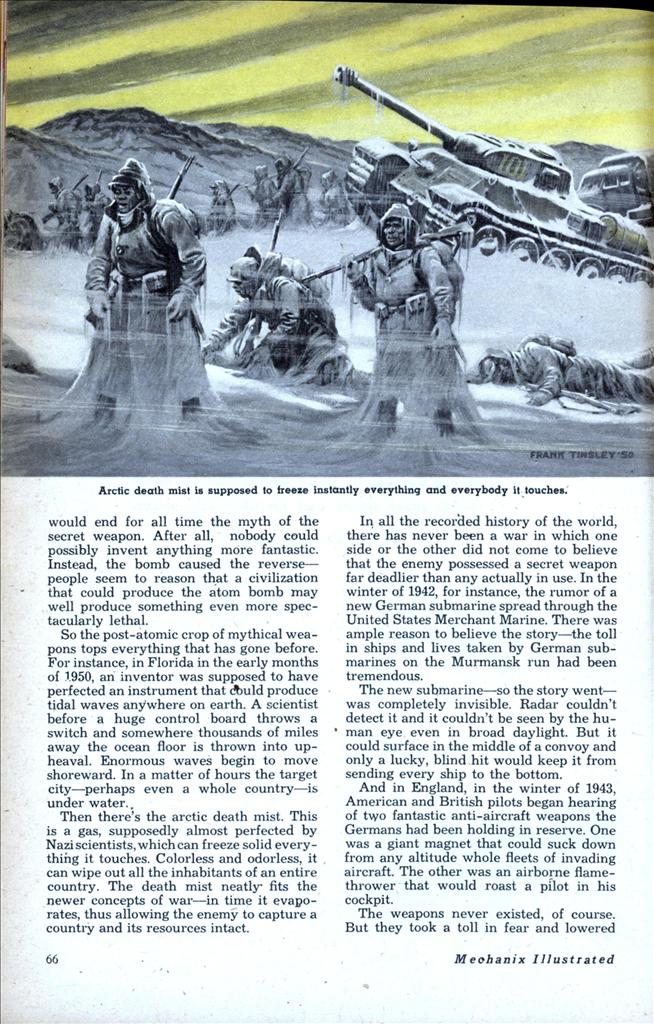 What About Those… SECRET WEAPONS?

Every war has its weird whispers about death rays, super gases and invisible submarines.

THE businessman got the word from the son of a scientist who heard it from a college professor working in nuclear research. Now it’s traveling with a speed that would embarrass sound. From tongue to tongue, from ear to ear the whispers twist the story about America’s newest secret weapon.

What is it? You mean you haven’t heard? Well, at last report it was a combination Geiger-radar-rocket-fire control unit which detects atom-bomb bearing planes and directs robot missiles, at them automatically!

Thus begins a new chapter in the fantastic history of the secret war weaponâ€”a history that goes back almost to the beginning of time. Probably the original story about a secret weapon made the rounds shortly after a man discovered that a large rock could kill an enemy.

Any competent sociologist might have concluded that the atom bomb would end for all time the myth of the secret weapon. After all, nobody could possibly invent anything more fantastic. Instead, the bomb caused the reverseâ€” people seem to reason that a civilization that could produce the atom bomb may well produce something even more spectacularly lethal.

So the post-atomic crop of mythical weapons tops everything that has gone before. For instance, in Florida in the early months of 1.950, an inventor was supposed to have perfected an instrument that could produce tidal waves anywhere on earth. A scientist before a huge control board throws a switch and somewhere thousands of miles away the ocean floor is thrown into upheaval. Enormous waves begin to move shoreward. In a matter of hours the target cityâ€”perhaps even a whole countryâ€”is under water..

Then there’s the arctic death mist. This is a gas, supposedly almost perfected by Nazi scientists, which can freeze solid everything it touches. Colorless and odorless, it can wipe out all the inhabitants of an entire country. The death mist neatly fits the newer concepts of warâ€”in time it evaporates, thus allowing the enemy to capture a country and its resources intact.

In all the recorded history of the world, there has never been a war in which one side or the other did not come to believe that the enemy possessed a secret weapon far deadlier than any actually in use. In the winter of 1942, for instance, the rumor of a new German submarine spread through the United States Merchant Marine. There was ample reason to believe the storyâ€”the toll in ships and lives taken by German submarines on the Murmansk run had been tremendous.

The new submarineâ€”so the story wentâ€” was completely invisible. Radar couldn’t detect it and it couldn’t be seen by the human eye even in broad daylight. But it could surface in the middle of a convoy and only a lucky, blind hit would keep it from sending every ship to the bottom.

And in England, in the winter of 1943, American and British pilots began hearing of two fantastic anti-aircraft weapons the Germans had been holding in reserve. One was a giant magnet that could suck down from any altitude whole fleets of invading aircraft. The other was an airborne flamethrower that would roast a pilot in his cockpit.

The weapons never existed, of course. But they took a toll in fear and lowered morale. How does the myth of a secret weapon get its start? No one can say for sure. Some just seem to grow out of thin airâ€”especially when a nation is on the losing side of a war. Many are the deliberate plants of warring nations. Others, the kind that persist in time of peace, are of vaguely scientific origin. And some, of course, get their start in pulp magazines and comics.

In all the history of the mythical war weapon, one grimly prophetic fact emerges. Eventually, the most persistent myths nearly always become real weaponsâ€”and the real weapons are usually more lethal than the ones invented by imagination alone.

The Archimedes myths are a perfect example. In 220 B.C., the besieged city of Syracuse was a cinch to be taken by the Romans. But then word spread among the Romans of a new weapon possessed by the city and invented by Archimedes, the celebrated Greek mathematician.

It was a gigantic glass. Aimed at an invading ship when the sun was in the sky, the glass would cause its target to burst into flames. Although Archimedes had, in fact, experimented with the principle of the magnifying glass, no such weapon existed. Yet the fear of it prolonged the war by at least three years.

Some time before, Archimedes had made an astounding statement which attracted much attention. “Give me a base somewhere off the earth,” he said, “and I can control the earth. I can stop it, start it, make it turn faster, turn it in the opposite direction.”

>That theory was debated down through the centuries. Some scientists called it possible; others labeled it ridiculous. Then, in April of 1946, U. S. technical experts probing through Germany’s secret war files, came up with a fantastic bit of news. German scientists had been working on a weapon that combined Archimedes theory with his magnifying mirror!

What they planned was a sun gunâ€”an enormous mirror which would float just above the gravity area. The satellite Would revolve with the earth but its altitude would remain fixed. The Nazi’s hoped to use the satellite to focus the sun’s rays on a targetâ€”a city, a military installation, an atomic-bomb production centerâ€”and burn it to a crisp.

The story of the satellite planet might have died right there but for a few lines of type which kept the rumors alive. They appeared buried in the first annual report of the national military establishment made public by the late James Forrestal in December 1948. The lines read: “The earth satellite vehicle program, which is being carried out independently by each branch of the military service, was assigned to the committee on guided missiles for coordination.”

The common insect has been one of the most persistent of the mythical weapons. When bubonic plague reduced London to a city of corpses and weary gravediggers, many believed an enemy had sneaked thousands of infected rats into the city. In both world wars, stories of bug weapons were as numerous as stories of upcoming furloughs. And they persist even between wars. When the dread hoof-and-mouth disease broke out among cattle in Mexico in the summer of 1946, many believed it was the work of saboteurs. The disease, according to the belief, had been implanted by enemy agents so it would spread across the border and decimate our entire beef supply. In the fall of 1949, Russia was said to have invented a new and quickly fatal disease which could be implanted in bugs and transmitted to humans. And in the spring of 1950, when East German potato crops failed, Russia blamed the whole thing on the United States. The real cause, according to Radio Moscow, was a beetle dumped on the crops by American airplanes. In North Korea, in the fall of last year, American troops stumbled into a macabre laboratory. It contained hundreds of diseased rats and equipment that indicated the laboratory had been engaged in implanting disease germs in small animals.

Almost at the same time, in a public statement which has never been refuted, Rear Admiral Ellis M. Zacharias said, “Our American germ weapons are already superior to out’ atomic weapons.” Remember that this statement was made 300 years after the myth of bacteriological warfare, had spread through plague-stricken London!

In these jittery days, Russia comes in for her share of secret-weapon speculation, too. Recently a rumor was making the rounds about the Russian scientists who are supposed to have tested a new weapon that would make the atomic bomb obsolete.

The instrument is a cosmic ray gun. Red scientists, according to the story, succeeded in harnessing the same deadly rays given off by the sun but until now rendered harmless to man by distance and atmospheric interference.

There are at least two versions of how the ray will be used. One story says Russian soldiers will carry lightweight cosmic ray guns which resemble flamethrowers. Airplanes will be equipped with giant guns that sweep the beam over a wide areaâ€”killing everything.

The other version is a gigantic instrument nearly the size of the tallest skyscraper. Set up along Russia’s borders, such guns would aim the ray at cities thousands of miles away, killing all the inhabitants in a matter of seconds.

But perhaps the most puzzling of all modern-day secret-weapon myths is the mystery of the flying saucers. First they were thought to be Russian machines, then vehicles from another planet. Now, another belief is taking hold and spectacular rumors are rife about them again.

The latest whisper found a spot in a New York gossip column in which the author stated definitely that the Air Force will release an official explanation of the flying saucers early in the summer of 1951.

Another rumor? The start of another myth? Perhaps. But, nevertheless, when June rolls around thousands of peopleâ€”including you â€”will be waiting expectantly.